World Contraception Day (WCD) is on 26 September. This annual worldwide campaign seeks to increase awareness of contraceptive options so that women and their partners have greater informed choice and fewer unwanted pregnancies. The vision of WCD, to ensure that every pregnancy is wanted, remains elusive in many countries, as an estimated half of all pregnancies globally are unplanned. Around one-third to a half of Australian women experience an unintended pregnancy in their lifetime1 and up to a third of Australian women will undergo an abortion.2 Fifty per cent of women who present for abortion in Australia and New Zealand are using a method of contraception. Many are relying on user-dependent methods, such as condoms or the oral contraceptive pill.3 4 Unintended pregnancies that do not result in abortion may result in poorer pregnancy outcomes than those that have been planned, with a higher incidence of adverse birth outcomes5 and serious social and psychological consequences for women and their families.

Evidence for the superior efficacy of LARC

Long-acting reversible contraceptive methods (LARC), in particular, intrauterine contraception (IUC) and subdermal etonogestrel (ENG) implants, are significantly less likely to result in unintended pregnancy than short-acting user-dependent methods, such as the oral contraceptive pill.6 7 In a large cohort study, these methods were found to be 20 times less likely to result in unintended pregnancy, compared to combined hormonal methods (the pill, patch or ring)8 (Figure 1). In addition, immediate initiation of LARC after abortion has been shown to reduce the rate of repeat abortion.9 10 11 IUC (copper intrauterine devices and the levonorgestrel intrauterine system) and ENG implants provide ‘fit and forget’ contraception for three to ten years and have higher continuation rates than short-acting contraception. LARC are more cost-effective than the contraceptive pill, even at one year of use.12 Despite this, the uptake of LARC methods in Australia remains low compared to other developed countries, with only 11 per cent of women using them.13 14 In contrast, 24 per cent of reproductive-aged women in Sweden use a LARC method.15Although the progestogen-only injectable contraceptive, Depo Provera®, fits the definition of LARC, it is regarded as a second-tier option, due to its lower efficacy.16 A self-administered, subcutaneous formulation of depot-medroxyprogesterone acetate, Sayana Press®, is available in the US and Europe. Self-administration of this contraceptive enables women to be given a yearly supply, offering greater choice and more autonomy over their contraception.17 18 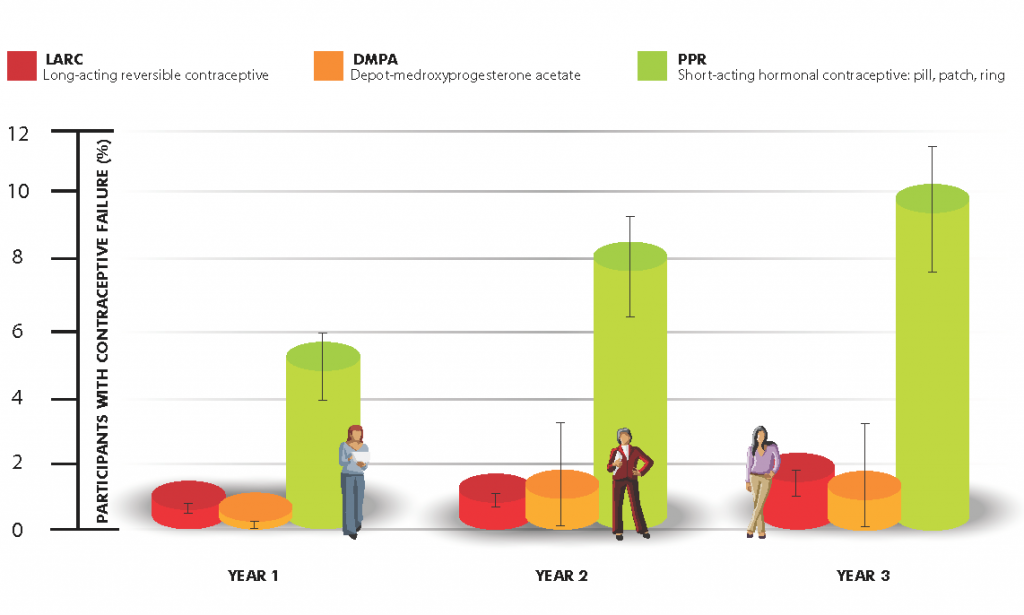 Recommendations for initiation of LARC

Historically, healthcare providers delayed commencement of a contraceptive method until the beginning of a normal menstrual period, to ensure there was no risk of pregnancy and that the method would become effective immediately. However, women present to their providers at different times of their menstrual cycle requesting contraception. Delaying initiation of her chosen method potentially exposes the woman to risk of an unintended pregnancy in the intervening time. This requirement for repeat visits adds an additional layer of complexity when, in many cases, taking a ‘quick start’ approach, initiating a contraceptive method at a time other than the start of the menstrual cycle will be safe and appropriate. In cases where pregnancy cannot be excluded, quick starting the levonorgestrel intrauterine system is not recommended and the copper intrauterine device should only be used if the criteria for its use as an emergency contraceptive are met.19

All LARC methods can be initiated immediately after surgical abortion. ENG implants can be inserted at the time of mifepristone administration for medical abortion and IUC can be inserted any time after expulsion of the pregnancy has been confirmed. Increasingly, women are choosing medical abortion or accessing services through telemedicine, with the procedure occurring at home, which makes early initiation of LARC more challenging. Women have high rates of non-attendance for a LARC interval insertion following abortion. In one study, only half of women fast-tracked to a contraceptive clinic after medical abortion actually attended, with the authors concluding that immediate insertion after medical abortion is preferable.20 If immediate insertion is not possible, greater likelihood of follow up is achieved if the appointment is scheduled within a few weeks of the abortion.21

As advocates for women, healthcare professionals must ensure that women have access to a wide range of contraceptive options appropriate for their needs. A detailed understanding about the risks and benefits of LARC methods is paramount, both for contraceptive providers and consumers.22 Conveying the facts to women can be challenging, especially in light of recent adverse media coverage of LARC methods in Australia.23 Informing women of the advantages of LARC methods can be difficult, with research demonstrating that women’s knowledge regarding contraception is suboptimal and that misconceptions regarding side effects are common.24 25 Providing balanced information about the benefits of LARC, along with free provision, can result in as many as 70 per cent of women choosing IUC or an implant over other reversible methods26 and dispel misconceptions about their suitability.27

Gaps in knowledge and training of LARC providers have been found to be a key barrier.28 A recent mixed methods study from the UK highlighted a number of issues, including a discordance between practitioner knowledge of eligibility for IUC and the medical eligibility criteria guidelines, lack of access to training, and risk aversion to undertaking procedures.29 Barriers among Australia primary care providers identified included a lack of: training in LARC insertion and removal, effective funding models for nurses to perform them, and availability of pathways for rapid referral.30 International research indicates a professional knowledge gap in familiarity with provision of IUC, with one of the major issues being misperceptions around the suitability of women for this method. Some providers are still reluctant to recommend or provide IUC methods for young or nulliparous women.31 32 33 This contradicts Australian and international evidence-based guidelines,34 35 which advocate the use of IUC in women of all ages and parity. Another barrier to accessing IUC may be the custom of mandating separate and multiple appointments for inserting devices.36 37 Many health services still initially offer a contraceptive counselling consultation and then request that the woman return at a later date for an insertion appointment. However, many women will be suitable for same-day insertion.

There is a continued trend for young women to use short-term hormonal and barrier methods of contraception rather than LARC.38 39 A cross-sectional survey of more than 1500 men and women of reproductive age found that, despite the availability of highly effective methods of contraception in Australia, a considerable proportion of respondents used methods of low effectiveness, such as withdrawal and fertility awareness-based methods (FAMs).40 The increased use of FAMs may be associated with increased availability of smartphone applications, such as Clue and Kindara. Users of these methods should be aware that, with typical use, FAMs are only 76 per cent effective.41

The cost implications of LARC must also be considered in the Australian healthcare system. Removal of financial barriers has been shown to increase uptake of LARC in the United States.42

Ensuring adequate training of general practitioners remains a challenge, particularly for IUC. Increasingly, hospitals are not providing contraceptive services and the community training opportunities in state-based family planning clinics are limited. New models of care are being considered, such as a hub and spoke design, whereby hospitals and some GP practices are identified as centres of excellence and develop recognition as training centres.