As a first-year registrar, a woman presented in spontaneous labour planning a trial of labour (TOL) after two previous caesarean sections (CS). Was my initial reaction, of a mild tachycardia and general uneasiness, justified? The woman had engaged in antenatal care, been counselled and reviewed on multiple occasions by a senior consultant. This sparked a couple of questions for me: What does current evidence show about TOL after two or more CS? Should this be something we are discussing with women?

CS is one of the most commonly performed operations worldwide with rates continuing to rise. WHO states that a CS rate up to 10% decreases maternal and fetal morbidity and mortality, while a rate higher then this has no added benefit.1 2 In 2019, our departmental average was 33.4% with 60% being elective repeat. This rate sounds considerably high, but is in keeping with the Australian average of 33% with 85% being elective repeats.3 Whilst there is no questioning a CS can be a life-saving procedure, there is a growing number of operations being performed without a true medical indication. Whilst the procedure is part of daily practice, one cannot ignore the risk of maternal mortality, maternal and fetal morbidity and increased rate of complications in future pregnancies. With one in three pregnancies ending in CS, vaginal birth after caesarean (VBAC) counselling has become something we all feel very comfortable doing, as a successful VBAC has significant maternal and fetal benefits.

At booking in, if the women’s last birth was a CS the doctor completing the first visit completes the NSW Health form ‘Antenatal Checklist – Supporting Women in their Next Birth After Caesarean Section (NBAC)’.4 This checklist is a guide to highlight the woman’s wishes, review of previous operation report/s, identify contraindications to VBAC and ensure non-biased counselling of both VBAC and repeat caesarean section (RCS) occurs. Whilst the department doesn’t actively promote VBAC in women with two or more previous CS, if they present requesting a TOL they are reviewed and counselled by a senior consultant. We recommend standard considerations for VBAC (intravenous access, continuous electronic fetal monitoring, monitoring of labour progress etc) and collaborative care in labour to optimise birth outcomes. We ensure an individualised care plan exists and encourage spontaneous labour onset, usually avoiding induction and augmentation of labour.

RANZCOG’s Birth after previous caesarean section states that there is a lower success rate of vaginal birth after two caesareans sections (VBAC-2) and higher rates of both uterine rupture and maternal morbidity compared to women who have one previous CS.5 Maternal morbidity for women undergoing VBAC-2 is similar to that undergoing their third RCS. The data referenced is from a meta-analysis that is reviewed below.5 Appendix B of the guideline is a table comparing outcomes of six studies looking at VBAC-2 vs VBAC-1.5 The guideline also makes mention of RCOG’s Green-top Guideline No. 45 ‘Birth After Previous Caesarean Birth’ and SCOG’s ‘Guideline for Vaginal Birth After Previous Caesarean Birth’.6 7 Both of which come to similar conclusions that TOL in a women with two previous CS is acceptable given they are aware of risks and in an appropriate birthing location.

There are no randomised control trials assessing VBAC-2 with VBAC-1 or RCS. The majority of papers are retrospective case series or cohort studies with small numbers. Tahseen and Griffith’s paper is most widely referenced.8 Seventeen papers were used with a total of 5666 women undergoing a planned TOL after two or more CS. As comparisons, six studies used VBAC-1, eight studies used RCS(third) and two studies used both VBAC-1 and RCS(third). The below table is a summary of results.

Table 1. Summary of pooled results from Tahseen and Griffith’s looking at VBAC-2 , VBAC-2 vs VBAC-1 and
VBAC-2 vs RCS(third).

TOL is acceptable for women who have been counselled regarding

Great emphasis has always been placed on the rate of uterine rupture, as it is the complication that has the most significant consequences. Tahseen and Griffiths rate of uterine rupture in the VBAC-2 group was 1.36%(0–5.4%). They also acknowledged that uterine rupture is a rare event and the studies reviewed had small absolute, numbers making it a difficult outcome to assess. Additionally, the definition for ‘rupture’ varied considerably across studies as well as how it was identified (manual palpation of uterine scar after successful VBAC was a common practice in the past). There were patients included who had unknown uterine incisions (i.e. classical and lower vertical) in some studies and IOL/augmentation with syntocinon.

It was identified that women who had a previous vaginal birth was more likely to undergo a TOL and thus a successful VBAC-1 or VBAC-2.15 16 17 But given the overall low numbers of uterine rupture, previous vaginal delivery is not considered a prerequisite for TOL with two previous caesarean sections. 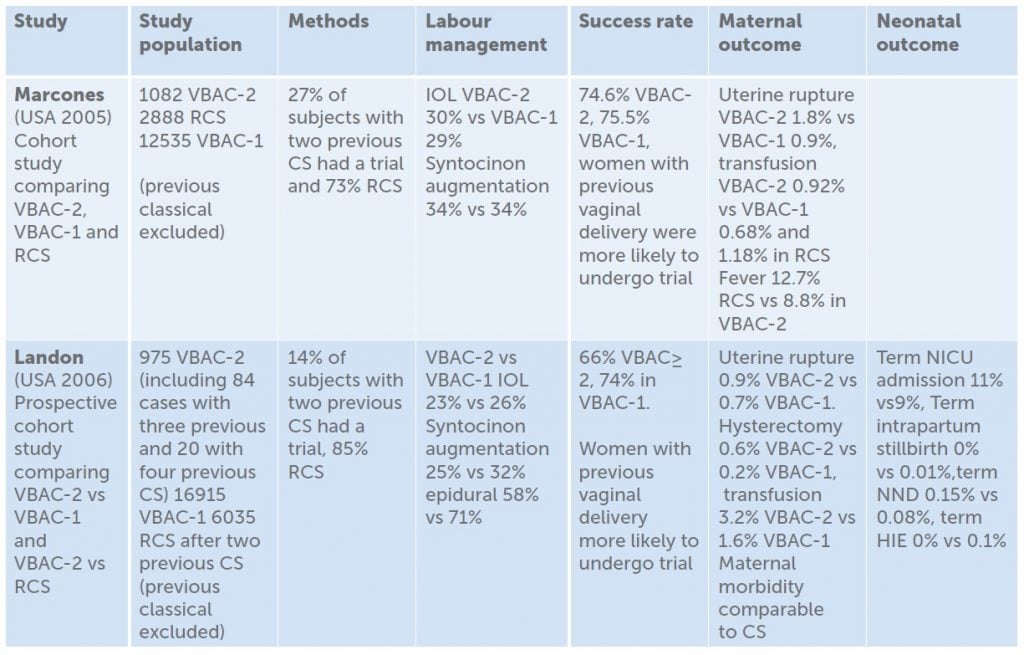 Limitations of Tahseen and Griffiths cannot be ignored: the timespan of studies included, varying practice over time and regions and inclusion of women with unknown scar type. Additionally, due to the study design, individual patient factors/cohort variants (BMI, age, fetal size) and study bias were unable to be reviewed and assessed which can make extrapolation of the data difficult.

There have been a handful of cohort studies published since the release of Tahseen and Griffiths that come to the same conclusions. On an interesting note, Metz et al found in a small secondary analysis of 359 women in 2015 that the use of the NICHD MFMU calculator for predicting successful VBAC to provide estimates similar to actual rates for women attempting TOL after two previous CS.18

Despite the lack of high-powered data regarding VBAC-2, there seems to be a consensus when it comes to TOL after two previous CS, and my initial feelings an over-reaction.

In contemporary maternity care, there is a place for VBAC-2, which can be supported safely achieving both short- and long-term health benefits for women