Medications that relax the muscle in the pregnant uterus – tocolytics – or increase uterine contraction – uterotonics – play a vital role in modern obstetric care. To understand their effects and side effects, it is important to have a knowledge of the underlying physiology of uterine muscle activity and how the different agents act on the muscle.

The pregnant uterus is essentially a bladder made of smooth muscle and in later pregnancy receives a blood supply of approximately 500ml every minute. The rhythmic contraction and relaxation of the myometrium during labour is a result of depolarisation and repolarisation of the smooth muscle membranes. These electrical discharges from muscle cells occur in bursts, with spikes of action potentials associated with muscle contractions. Although individual spikes can bring about a contraction, co-ordination of the spikes is required for sustained uterine contractions (see Figure 1). Myometrial cells do not act individually, but are coupled by gap junctions consisting of connexin proteins that group together, providing channels of low electrical resistance. For most of the pregnancy, these gap junctions are sparse, but closer to the onset of labour the number of gap junctions increases almost exponentially, allowing the myometrium to act as a co-ordinated syncytium (see Figure 2). 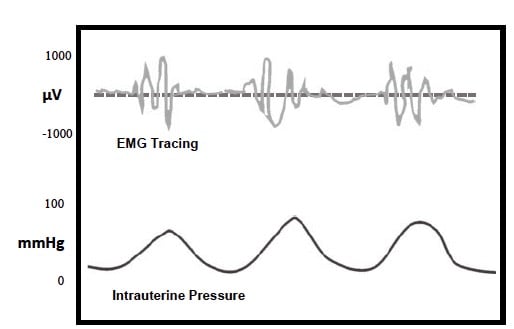 Figure 1. Myometrial action potentials and their relationship to uterine
contractions in a typical labour. 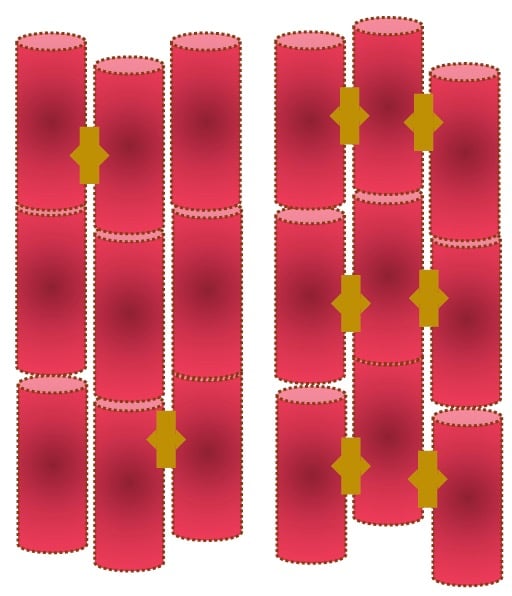 As the action potential spreads out over the myometrial cell surface, voltage-dependent calcium channels (VDCCs) open, allowing calcium ions to enter the muscle cell. These act on the myofilaments and initiate a contraction. There are a number of different mechanisms that influence myometrial contractility and these are summarised diagrammatically in Figure 3. The expression of VDCCs on the myometrial cell surface is controlled by progesterone. Indeed, progesterone has a number of important roles in reducing activity of the myometrial cells. Progesterone suppresses gene expression of connexins and VDCCs, it reduces synthesis of prostaglandin and up-regulates the nitric oxide (NO) system. Withdrawal of progesterone effects appears to be the major mechanism leading to the onset of labour. 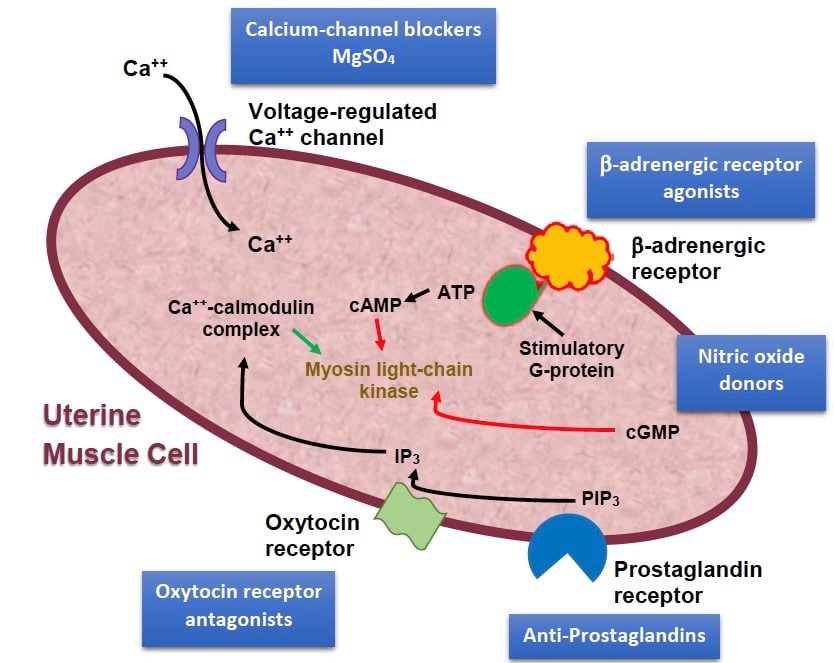 Oxytocin is a molecule composed of nine peptides (a ‘nonapeptide’) that is synthesised in the hypothalamus and secreted from the posterior pituitary. It was first isolated and characterised by the American biochemist Vincent du Vigneaud, working at Cornell University Medical College, and the discovery earned him a Nobel Prize. Oxytocin attaches to a specific trans-membrane G-proteincoupled receptor and activation of the receptor initiates contraction of uterine smooth muscle. Oxytocin is very similar in structure to vasopressin and it has a similar renal effect in the kidney, reducing urine output with a potential to cause hyponatraemia.

Ergometrine is one of the ergot alkaloids, closely related to lysergic acid (LSD). Ergometrine is known to act at dopamine, serotonin and α-adrenergic receptors, but its powerful effect in causing uterine muscle contraction is not associated with any one particular receptor type. It also causes contraction of smooth muscle in blood vessel walls, thus reducing blood loss from the uterus. However, this mechanism is the behind a number of side-effects: nausea and vomiting headache, dizziness and hypertension.

Prostaglandins (PGs) are lipid compounds derived from fatty acid precursors. They were first isolated from seminal plasma in the 1930s, and the name ‘prostaglandin’ reflects their origin. The intermediate product, arachadonic acid (AA) is then metabolised by cyclo-oxygenase (COX) to various prostaglandin products, which in turn act through PG receptors that reduce cAMP in the muscle cell. Prostaglandins of the E2 class are closely associated with labour onset and are released from multiple tissues, and a likely source is the membranes and possibly decidua in labour.

Misoprostol is a synthetic analogue of PGE1, and was originally developed to prevent gastric ulceration in patients using long-term non-steroidal anti-inflammatory drugs (NSAID) therapy. It acts through PG receptors to initiate uterine contractions. Because it is inexpensive and does not need refrigeration, it is a useful adjunct to other uterotonics in the management of postpartum haemorrhage, as well as early pregnancy loss.

β2-agonists, such as salbutamol and terbutaline, act on smooth muscle through β2-adrenergic receptors. The receptors act through stimulatory G-proteins to increase levels of intracellular cAMP. cAMP acts in a number of ways to bring about smooth muscle relaxation: it decreases intracellular calcium concentrations and inactivates muscle filament actions. β2-agonists also open calcium-activated potassium channels and change the polarisation of smooth muscle cells. The combination of all of these mechanisms leads to smooth muscle relaxation. β2-agonists affect vascular smooth muscle causing peripheral vasodilatation, which in turn provokes tachycardia, which is one of the major adverse effects of their use. They can also induce peripheral tremors, sweating and a sense of agitation. Prolonged use of β2-agonists in higher doses has been associated with pulmonary oedema and cardiac arrhythmias.

NSAIDs act to inhibit the activity of prostaglandin synthatases, enzymes that convert the precursor arachadonic acid to prostaglandins. These enzymes are known as COXs. In pregnancy, the myometrium expresses both COX 1 and COX 2 and these are thought to play a role in the initiation of labour. Uterine muscle cells express receptors for prostaglandins, and release of prostaglandins from the membranes triggers these receptors, causing uterine contractions. NSAIDs inhibit the synthesis of prostaglandins, hence their tocolytic action. A number of studies have shown that NSAIDs are indeed effective as tocolytics, but concerns have persisted about their potential effect on the fetal ductus arteriosis, although this is likely to be a very uncommon complication of their use. Another concern has been the effect of NSAIDs on the gut blood supply and a possible association with necrotising enterocolitis, and this remains to be resolved.

Atosiban inhibits oxytocin and its close relative vasopressin. It is a synthetic peptide chain that blocks production of inositol triphosphate (IP3). This action reduces the concentration of intracellular calcium in the myometrial cells and also blocks release of prostaglandins.

When the action potential crosses the muscle cell membrane it stimulates voltage-gated calcium channels to open, allowing calcium ions to enter the cell. The calcium binds with calmodulin and acts on myosin light-chain kinase to bring about contraction. Calcium channel blockers (CCBs) disrupt the function of the calcium channels and thus cause smooth muscle relaxation. This is obviously useful to reduce myometrial contraction, but has a number of side effects arising from the relaxation of vascular smooth muscle and cardiac muscle. CCBs selectively relax arteries and thus reduce blood pressure, though they have little effect on veins. They can also reduce cardiac output and slow the heart rate.

Glyceryl trinitrate (GTN) is a precursor to its active metabolite nitric oxide (NO), but the exact mechanism of this denitration is still unclear. It is the active metabolite NO that induces formation of cGMP which acts, through a cGMP-dependent protein kinase, to active myosin light-chain phosphatase in the muscle cell. GTN, though its effect of profound and rapid-onset peripheral vasodilatation, can cause hypotension and quite unpleasant maternal headache and these side effects tend to limit its use. However, it can be very useful in affording rapid and very safe uterine relaxation in emergency situations, and this effect is quite short-lived.

The initiation of uterine contraction is complex and multifactorial. Because there are multiple influences on myometrial function, a number of different approaches to both increasing contraction and tocolysis are available. None are perfect, and each has benefits and potential adverse effects. The selection of these therapies depends upon experience and individual patient circumstances.