Uterine rupture is defined as a full thickness separation of the uterine wall and the overlying serosa.1 It is associated with significant neonatal and maternal mortality and morbidity. It mainly occurs in third trimester;2 spontaneous uterine rupture in first trimester is rare and very difficult to diagnose.

A 30-year-old woman presented at 20+1 weeks gestation, with post-coital exacerbation of generalised abdominal pain. She did not report vaginal bleeding.

She had had two previous lower segment caesarean sections at term overseas. The morphology scan at 19 weeks and 3 days reported an anterior placenta previa covering the cervical os by 5.1 cm.

On examination, the patient was diaphoretic and pale, with a blood pressure 78/53 and a heart rate 105. She had generalised abdominal tenderness with gross abdominal distension. Blood investigation revealed dropping haemoglobin levels (83 g/L to 61 g/L two hours apart), INR 1.3 and fibrinogen 1.8 mg/dL.

An urgent ultrasound reported large free fluid in the abdomen. The patient was immediately taken to theatre. Laparoscopic entry proved difficult visualisation as blood refluxed into the laparoscopic port and a four-quadrant hemoperitoneum obstructed visualisation of pelvic contents. A large round haemorrhagic mass was seen centrally and thought to be a haemorrhagic cyst (Figure 1). 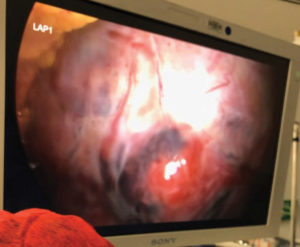 Figure 1. View upon laparoscopic entry of a large central pelvic mass with areas of haemorrhage and prominent large surface vessels.

Decision for conversion to laparotomy through previous caesarean scar found placenta percreta with a ruptured lower uterine segment (Figures 2a and 2b). The central mass seen on laparoscopy was, in fact, the uterus with abruption and large surface vessels. Figure 2a. Lower segment uterine rupture with an adherent placenta. Figure 2b. Significant distortion of the lower uterine segment from uterine rupture.

The fetus was entirely expelled in the abdomen. Due to extensive uterine bleeding and distorted uterine anatomy, the decision was made for subtotal hysterectomy (Figure 3). 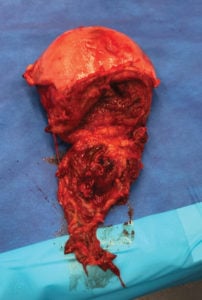 Total blood loss was 4000 mL. The patient received 8 units of packed red blood cells, 7 bags of fresh frozen plasma, 1 unit of platelets and 3 L of crystalloid fluids; postoperative care was in ICU. She was discharged home on day six. The fetus weighed 250 g. 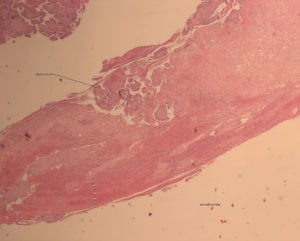 Figure 4. This histopathology slide demonstrates that two key elements of normal placental implantation are not present: there is no decidua between the chorionic villi and the uterus, and there is no myometrium. [H&E stain]. Image Courtesy of Liverpool Hospital Anatomical Pathology and A/Prof Leonardo Santos and Dr Miriam Fewtrell..

In normal implantation, there is a layer of decidua that separates the placental villi from the myometrium at the area of implantation; in adherent placenta, this is lacking.6 Adherent placenta is rare, with incidence ranging from 1:500–1:93 000 deliveries.7 Placental accreta constitutes 78–80 per cent of cases, with placental increta and percreta constituting 15 per cent and 5–7 per cent of remaining cases of adherent placentation respectively.8 9 Placenta percreta is the most aggressive form of the spectrum, an obstetric complication that can have catastrophic consequences. In adherent placenta, the maternal mortality rate is 7–11.10 per cent and neonatal mortality is 9.76 per cent, with such rates mostly accredited to placenta percreta complications.

Placenta percreta-induced spontaneous uterine rupture more commonly occurs in the second and third trimesters; however, there have been rare cases where it has occurred between 10–20 weeks gestation.16 17 While the overall incidence of placenta percreta is low, increasing caesarean section rates in modern obstetrics is leading to increasing rates of placenta percreta.18 19 In women with placenta previa, the frequency of placenta accreta increases with increasing number of caesarean deliveries as per Silver RM et al.20 21

Clinical signs of uterine rupture include acute abdominal pain, scar tenderness, vaginal bleeding and maternal tachycardia and hypotension;22 however, some signs may not be present as our patient had insidious onset of abdominal pain and no vaginal bleeding. There is significant fetal and maternal morbidity and mortality in delayed diagnosis of uterine rupture. Potential complications include fetal death, maternal haemorrhage, injury to nearby organs, emergency hysterectomy and maternal death.23

Delayed diagnosis may be attributable to consideration of more common diagnoses, such as a ruptured ovarian cyst. As such, uterine rupture and placenta percreta should be considered in all pregnant women who present with an acute haemorrhagic abdomen at the start of pregnancy.

It is crucial to appreciate the roles of imaging and investigations to minimise morbidity and mortality and allow for early planning and potential conservative treatment.24 If an adherent placenta is suspected on ultrasound, consider alpha-fetoprotein level, which tends to be elevated, and an MRI for placental mapping when ultrasound findings are inconclusive.25 26

There’s the question as to whether our patient with a previous caesarean section and a placenta previa on the morphology scan should have been urgently referred to a tertiary hospital for counselling on further management in light of the complications involved, with utilisation of fetomaternal unit assessment and MRI.

There’s the thought that if ultrasound at the morphology scan had questioned placenta percreta, our patient may have been sent in urgently to a tertiary centre to discuss continuation of pregnancy and prolonged hospital admission (with risk of prematurity) versus termination of pregnancy. This raises the question whether there was potential to pick up uterine rupture earlier and whether intercourse triggered the rupture due to further mechanical weakening.

Diagnosis of adherent placenta in early pregnancy is a challenge. This case serves as a reminder to consider uterine rupture as a differential diagnosis in the acute abdomen in early pregnancy, and use of thorough clinical and investigative skills to derive a diagnosis. While a difficult decision, laparoscopy should be considered for investigation of undifferentiated acute abdomen in first trimester of pregnancy.32

Early suspicion for placenta praevia and percreta allows for further assessment with fetomaternal unit referral and consideration of MRI, as well as multidisciplinary team utilisation for delivery planning.