Obstetric haemorrhage is still the leading cause of direct maternal deaths in Australia. Of these, uterine inversion is a rare, but critical, subset, with an incidence of one in 1200–8000 and maternal death occurring in 15 per cent of cases.1 2 3 It arises when the uterine fundus descends into the endometrial cavity, where the inner walls of the uterus may be exposed through the cervix or vagina. Although 5 per cent of cases occur on a non-obstetric basis, usually due to externalisation of a uterine mass or lesion, in this article we will primarily refer to the obstetric emergency. 4

Most causes of uterine inversion are commonly associated with uncontrolled cord traction or excessive fundal massage, though there are cases in which no tension was applied to the cord.5 Additionally, a placenta that has partially detached or invasive placentation may increase the risk of uterine inversion.6 Fetal macrosomia, primiparity, fundal placentation, uterine lesions or anomalies, short umbilical cord and a rapid delivery have been considered theoretical risks, but these causes are present in fewer than 50 per cent of cases.7 8 9 Uterine inversion can occur with minimal predisposing risk factors.

Early diagnosis and management is vital and can prevent haemodynamic shock and mortality. Uterine inversion can arise during vaginal birth or caesarean section, with inversion during vaginal delivery being more difficult to diagnose and manage. When uterine inversion is encountered during caesarean section, there is adequate analgesia and tight control of haemodynamic stability. Additionally, inversion is recognised readily and the uterus is replaced easily under direct vision without the formation of a cervical constriction ring. Post vaginal birth, the placenta is commonly still partially attached. This is also associated with a severe postpartum haemorrhage, owing to the stretching of the implantation endometrium (similar to atony), allowing an exacerbation of bleeding.15 Other clinical features include lower abdominal pain and haemodynamic instability or shock. In some cases, it was noted that the haemodynamic instability was disproportionate to the blood loss. This has been theorised to be related to stretching of pelvic parasympathetic nerves, leading to neurogenic shock.16 The issue with this theory is that due to emergent nature of these cases, there may be an underestimation of blood loss.17 Clinical signs, such as loss of a palpable uterine fundus or a vaginal examination that reveals an abnormal soft mass, are also diagnostic, but in most cases (90 per cent) the uterine fundus can be visualised externally.18 Medical imaging may be used to confirm diagnosis when symptoms are subtler; for instance, in the 10 per cent of cases where an incomplete inversion has occurred. Ultrasound findings described as ‘upside-down and inside-out’ or ‘pseudostripe’ have been noted in previous case studies.19 20 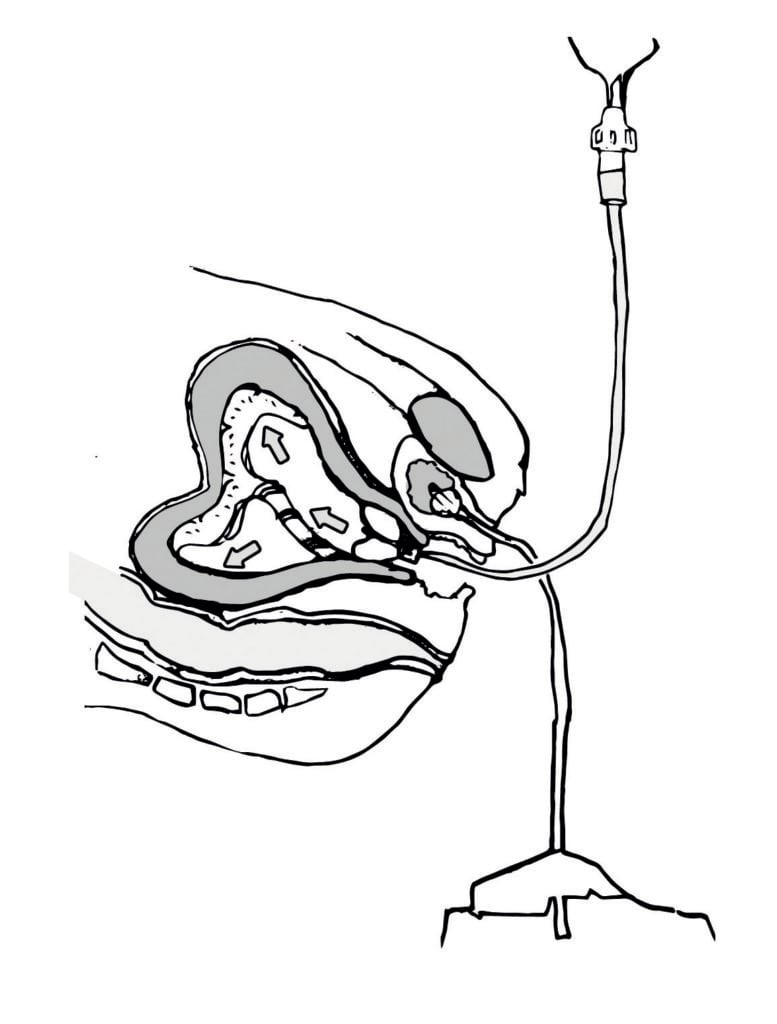 Uterine inversion requires early diagnosis and rapid management. Management has two key elements. Firstly, return of the uterus to its anatomical position promptly while preventing re-inversion. Secondly, the management of postpartum haemorrhage while counteracting haemodynamic instability. The latter requires adequate intravenous access and aggressive fluid and blood product resuscitation. Uterotonic agents should also be ceased if uterine inversion is diagnosed, until after replacement of the uterus.

The reversal of the uterine inversion can be completed with Johnson’s manoeuvre (Figure 1). Prior to detaching the placenta, (removing the placenta prior to replacement increases blood loss) a hand is placed inside the vagina and pressure is applied along the axis of the vagina towards the umbilicus. The earlier this is attempted, the higher the chance of success, while minimising blood loss.21 A delay leads to an increased failure rate due to the formation of constriction ring as the cervix begins to contract, which minimises space to perform Johnson’s manoeuvre.22 If initial immediate attempts fail (30 per cent of reported cases), the involvement of a multidisciplinary team including anaesthetists, theatre staff and ICU is critical.23 This manoeuvre may be attempted again under anaesthesia and with the cessation of uterotonic agents administered postpartum and the usage of utero-relaxants. Glyceryl trinitrate (GTN) may be considered first line due to its ability to relax smooth muscle rapidly and short half-life, reducing the risks of worsening any associated bleeding.24 Other utero-relaxants, such as magnesium sulphate and terbutaline, may be considered.25

An alternative method of reversing the uterine inversion without surgical intervention has been documented in multiple case reviews. Hydrostatic reduction (Figure 2) can be accomplished by placing the patient in a reverse Trendelenburg position with lithotomy, replacing the externalised uterus and contents (partially detached placenta) into the vagina, then placing a suction cap (such as, neonatal ventilation mask, 22/24 Fr indwelling catheter balloon) inside to form a seal with the vaginal walls.26 A free-flowing, warmed fluid bag is hung at least one metre above the patient and allowed flow into the vagina via the suction cap.27 The pressure applied intravaginally by the accumulation of fluid may return the inverted uterus to its anatomical position. Recent case reports have stated that if the uterus cannot be replaced manually, hydrostatic reduction should be attempted prior to surgical interventions, depending on haemodynamic stability and blood loss.28

If conservative measures have been unsuccessful or the patient is haemodynamically compromised, surgical correction is the next appropriate step (Figure 3). The most common approach involves a laparotomy followed by the Huntington procedure and/or Haultain procedure. On entry into the abdomen, a cup-like structure is usually visualised in place of the uterus with the bilateral round ligaments, fallopian tubes and ovaries being retracted inwards. This is the cervical ring structure.

Huntington’s procedure involves a replacement of the uterus by retracting the fundus superiorly with atraumatic instruments (Allis forcep or Babcock clamp) grasping the round ligaments and reapplying medially as more of the round ligament becomes visible. Simultaneously, reduction may also be attempted vaginally to facilitate correction of the uterine inversion. Haultain’s procedure involves a sharp dissection of posterior aspect of the uterus. The incision is to release the constriction ring, allowing additional space for manual replacement of the uterus, or Huntington’s procedure to be completed. Finally, a repair of the posterior incision concludes this procedure. An anterior incision or Ocejo incision may also be considered, but with some risk of a bladder injury due to distortion of the anatomy immediately postpartum. 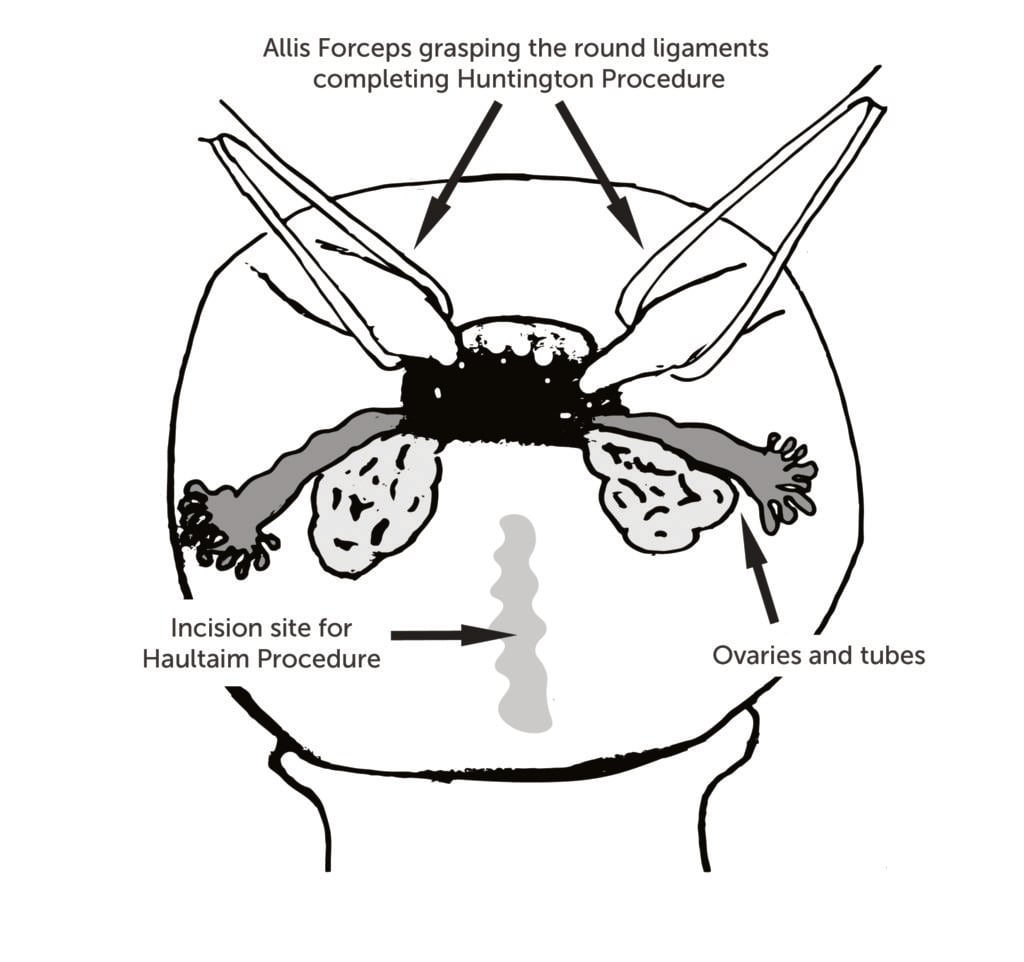 There are published case reports of laparoscopic-assisted reduction of uterine inversion and vaginal approaches to dissection of the cervical constriction ring (Spinelli’s procedure), but these are performed rarely.29 30 No cohort studies or trials are available to evaluate success rates or compare surgical interventions for uterine inversion due to the low incidence of failed conservative reduction.

Delivery of the placenta should only occur after repositioning of the uterus. Manual removal of placenta was completed in most case reports, after uterine replacement, followed by administration of uterotonic agents to minimise blood loss and prevent re-inversion of the uterus.10 Some case reports have also documented the use of an intrauterine balloon catheter (Bakrii) to again assist with any blood loss and prevent reinversion.31 Lastly, to prevent postpartum endometritis, broad spectrum antibiotics should be considered.

Uterine inversion is an obstetric emergency that requires prompt diagnosis and management to prevent maternal morbidity and mortality. Due to its scarcity, practitioners will have limited experience, but with early diagnosis and timely management to replace the uterus while preventing haemodynamic compromise, a good outcome can be anticipated. Owing to the lack of predisposing features for uterine inversion, clinicians should be ever vigilant about uterine inversion in situations that involve a postpartum haemorrhage.