A 29-year-old woman had the Mirena® levonorgestrel-releasing intrauterine system (LNG-IUS) inserted by her gynaecologist for contraception at four months postpartum. She was breastfeeding and amenorrhoeic at the time.

One year later, her GP was unable to visualise the Mirena strings on speculum examination. The patient thought the Mirena had been expelled spontaneously and was reassured as a pelvic ultrasound did not show sonographic evidence of an intrauterine device (IUD). Her gynaecologist then inserted a copper IUD at her request. The patient experienced left-sided hip pain almost three years later and had the copper IUD removed by her GP. An X-ray of her left hip and pelvis was performed for ongoing pain, and revealed an IUD in the left pelvis. A pelvic ultrasound reported left hydronephrosis and an empty uterine cavity. A subsequent CT scan confirmed left hydronephrosis and hydroureter with obstruction at the level of the mid-pelvis, in close proximity to the displaced IUD.

A laparoscopy performed four days later revealed a fibrous band across the left ureter in the mid-pelvis with proximal gross hydroureter. A Mirena was seen lying next to this stricture band (see Figure 1, Left). There was no laparoscopic evidence of other pelvic pathology or endometriosis. A urologist attended intraoperatively and performed a cystoscopy and retrograde pyelogram, confirming an obstructed distal left ureter (see Figure 1, Right). A left ureteric stent was inserted, dissection of the left lateral pelvic side wall performed, and the stricture excised. The hydroureter was noted to improve immediately after excision of the stricture band. The ureteric stent was removed six weeks later, with an uncomplicated recovery. Histopathology of the excised tissue showed mild peritoneal inflammation with no evidence of endometriosis. 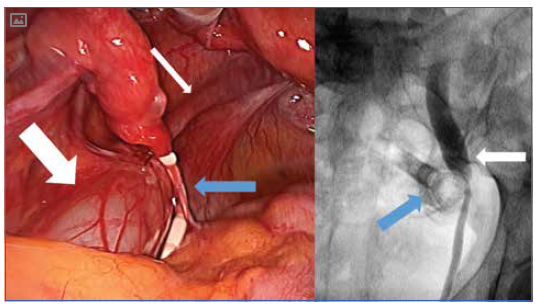 The Mirena LNG-IUS obtained TGA approval in 20001 and has gained popularity in clinical practice in Australia due to its dual action of contraception and menstrual flow reduction. Almost a million Mirena have since been sold in Australia.2 Perforation of the uterus with IUD insertion is uncommon, with a reported incidence of 0.1 per cent.3 4 Uterine perforation by an IUD can occur at the time of insertion without recognition by the practitioner. In the majority of such cases, the IUD is found lying freely in the pelvis and laparoscopic removal is the first choice of therapy.5 6 IUD insertion while breastfeeding, or within an interval of less than 36 weeks since last delivery, are associated with a six-fold increase in the risk of uterine perforation.7 The incidence of serious adverse events is rare.8 The risks and benefits of IUD insertion in the postpartum period while a woman is breastfeeding should be carefully considered by both clinician and patient.

An English literature search in combination with the manufacturing company of the Mirena (Bayer Australia Limited) did not reveal any reports of a Mirena associated with ureteric obstruction, nor are there any reported cases within Bayer’s global pharmacovigilence database.9 We believe this is the first report of a ureteric complication associated with a misplaced Mirena LNG-IUS.