“History needs to be mightily inventive about human life because bare life is an accusation against man’s dominion of the earth.”

– an excerpt from The Secret Scripture by Sebastian Barry

Erinn is now 31 years old. I remember her birth so clearly as underlined by my emotional reactions at the time and tempered by human philosophy ever since. I can only guess what may have been reality should she not have carried more genetic inscription than most of us. Does knowing her genetics help any more than knowing the basic ‘Lego’ of our other children?

I couldn’t entertain the conviction of my eyes at her birth, travelling across Sydney late that mid-winter evening. Should I wait for the paediatrician’s assessment? I hadn’t said anything to my excited wife. Just stay cool and make the necessary phone calls, I thought. Now, here I was travelling back in remote control of a VW Beetle, reflecting upon the control anyone really has over the significant aspects of their existence.

‘…it became clearer that my reactions were in large part for myself and not for Erinn – she was already helping me to grow.’

Our other four children were with their grandparents and had already fallen asleep. I hadn’t been able to make the calls, perhaps needing the comfort of their presence to speak of my confusion and uncertainty. Our obstetrician and I were old teacher-student friends. We both knew but didn’t say the words, just made the decision for paediatric consult, hoping to delay our fears.

Thus was Erinn’s arrival, muted by fears and unaccompanied by the usual high fantasy of parental self-indulgence. My dear wife led me back to the world of expectations, with her instinctive acceptance and mothering of this happy and responsive baby. Fears of the future were thankfully dashed by the immediate dangers of apparent neonatal chest infections, possible cardiac anomalies and the need for tube feeding for the first few weeks. I realised I was already bonded to this new life and slowly released the demons of self-pity. Now it was ‘we’ who were eagerly awaiting the release of Erinn to her family.

The first few days were, as I have said, quite confused – reliving turbulent emotion as phone calls to family and friends needed to acknowledge that there was something wrong. The name of a syndrome helped to show that at least one was working on it and ‘no’, you couldn’t have just a little bit of the syndrome. These dear friends comforted me and it thus became clearer that my reactions were in large part for myself and not for Erinn – she was already helping me to grow.

Those days it took a few weeks to return the expected genetics, but by then our shattered self-images had returned to the balm of our co-existence. A generous couple came to our house to help reassure us that we could still have expectations for Erinn. They brought their two children, a 12-year-old girl and a boy of about seven. The young girl played the violin for us and she was ‘like Erinn’. As months went by, Erinn seemed to do the same as the others – just a bit later. Her heart condition was diagnosed as an ‘endocardial cushion defect’ and we were advised that surgery was too hazardous. My wife recalls the harshness of this sentence and the words ‘bring her back when she is two, if she is still alive’. My recollection was of the helpful clarity of the consultation. In those days, the echocardiogram machine was twice the size of a large kitchen fridge and was housed in a basement office under the old Royal Prince Alfred maternity building.

Circumstances took us to England again to live when Erinn was five months old and we left Australia thinking she may not return – harder to bear for her grandparents than perhaps for
us. In England, we followed up with paediatric cardiologists who suggested that surgery was an option but that it must be done soon to avoid the irreversible changes of pulmonary hypertension. My wife and I considered the risks to be too great and declined.

Erinn did not walk until 18 months of age. The children used to take her from room to room in the house, depending where they were playing. Ever vigilant for changes in her condition, we noticed grazes on her nose and sternum – her enlarged heart caused some sternal protuberance. We worked out that they were carpet burns, thus raising the level of vigilance from then on as the others were shown how to move her with greater care. She was also quite small, maybe 13 pounds at 12 months. My wife was a little exasperated more than once by elderly ladies’ concerns that Erinn was not being fed enough and that she should give up on breastfeeding.

Our arrival in England in December/January was a cold surprise for Erinn. An old friend from our earlier stay had arranged housing on the hospital premises. She met us and settled us into the house. Nearing term pregnancy herself, she was excited to see Erinn and nursed her constantly for a few hours. The next week, she went into labour, giving birth to a Down syndrome boy with the same cardiac anomaly as Erinn. This dear friend said later that she would not have been able to cope as well had it not been for the short time with Erinn just before her delivery. She found that seeing Erinn in a family context made it easier to welcome her own son, Alex, who unfortunately died due to his cardiac problems at about 14 months of age.

‘From such confused beginnings, it is wonderful to know that life would not have been as liveable without Erinn.’

We have had six more children since Erinn, thus most of them can’t recall a time without her. Erinn has had a major influence on their development, their assessment of what a tragedy is and what an opportunity is and ‘what’s the problem anyway’. Erinn has her own group of friends outside the family circle and her reliance on the family ties, though more obvious, is no more or less real than the ties that bind the other ‘children’. Erinn’s ‘needs of us’ are just more predictable and certainly not more challenging. From such confused beginnings, it is wonderful to know that life would not have been as liveable without Erinn. 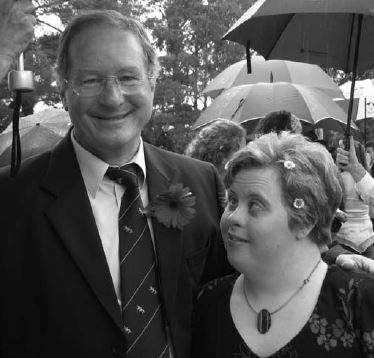 Dr Halloway with his daughter, Erinn. 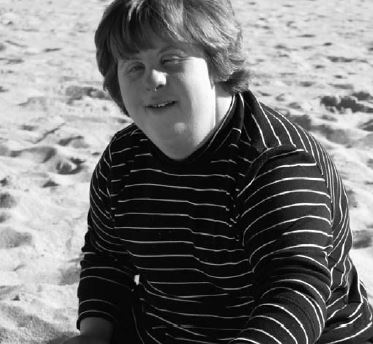