Should we excise or ablate all small deposits of endometriosis at laparoscopy?

Endometriosis, characterised by the finding of endometrial-like tissue outside the uterus, is one of the most common gynaecological conditions associated with pain and subfertility among women of reproductive age.1 It is one of the leading indications for laparoscopic surgeries both for diagnostic and therapeutic purposes in women presenting with pain or infertility.2,3

Among the many on-going controversies regarding the management of this enigmatic condition is the question of whether it is worthwhile going to all the trouble of excising small deposits of endometriosis at laparoscopy, or whether cauterising them achieves the same outcomes in terms of pain and fertility (see Figure 1).

Within the limited scope of this article, we will attempt to address this fundamental question by reviewing current knowledge of the mechanisms of pain and infertility in association with endometriosis, considering the differences between excision and ablation in terms of diagnostic and therapeutic merits, and finally appraising the scientific evidence of excision versus ablation in terms of pain and fertility outcomes.

Pain symptoms most commonly associated with endometriosis are dysmenorrhoea, dyspareunia and non-menstrual pelvic pain.4 These symptoms may exist in variable combination and may fluctuate in severity from person to person and from time to time.5 There is good evidence linking pain to endometriosis, with estimated prevalence ranging from 30–90 per cent among women undergoing laparoscopy for evaluation of chronic pelvic pain.6 There is also strong evidence supporting significant pain improvement and surgical treatment of endometriosis.7, 8

However, the relationship between pain and endometriosis is not clear cut as endometriotic lesions similar to those found in women presenting with pain have also been detected in up to 43 per cent of asymptomatic women.9 This observation suggests that the mechanisms by which endometriosis causes pain are still not fully understood and may vary from person to person.10 Pain from endometriosis is thought to arise predominantly through nociceptive, inflammatory and neuropathic pathways as a result of direct effects of cyclical active bleeding from endometriotic implants, and indirect effects involving the production of cytokines and nerve growth factors by endometriotic cells and activated macrophages activating silent nociceptors, irritating and stimulating neuronal ingrowth into nerve endings of pelvic floor nerves especially in the pouch of Douglas and the areas of the uterosacral ligaments.11-13 Another puzzling aspect between endometriosis and pain is the observation that the association between endometriosis stage and severity of pelvic symptoms is marginal and inconsistent.14-16 On the basis of these observations, one can appreciate the difficulty in evaluating pain as an outcome measure following surgical treatment of endometriosis.

How does endometriosis cause subfertility/infertility? 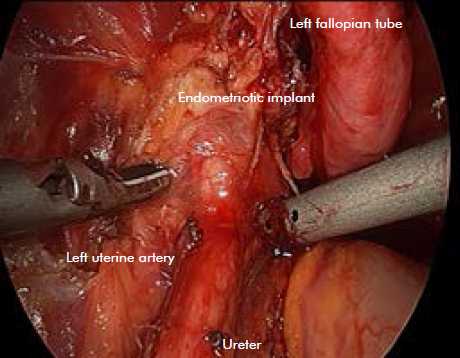 Figure 1. A large endometriotic implant being excised over the top of the left ureter.

While there is a strong association between endometriosis and infertility, no causal relationship has been clearly established. The many mechanisms by which endometriosis may cause subfertility include adhesions and distorted pelvic anatomy that prevent oocyte release or transport, increased peritoneal fluid concentration of inflammatory cytokines that may have adverse effects on oocyte function and quality, sperm motility, sperm DNA, sperm capacitation, oocyte-sperm interaction, fallopian function, impaired implantation and abnormalities in embryo quality.25, 26 These conflicting observations highlight the difficulty when measuring fertility as an outcome following medical or surgical interventions, thus accounting for on-going lack of consensus about the choice and consequence of surgical treatment modality.

Factors that influence the choice of surgical method

In general, the aims of laparoscopic surgery of endometriosis are to remove (excise) or destroy (ablate) all visible endometriotic lesions, to divide adhesions and restore normal anatomy, and to repair damage to reproductive organs.27 The choice of techniques for surgical treatment of endometriosis currently includes sharp dissection, electro-surgery, Argon Neutral Plasma Energy, laser or harmonic energy.28

Ideally, the choice of surgical instrumentation (scissor dissection, electrosurgery, laser, harmonic, argon beam) and the mode of treatment surgical technique (excision or ablation) should be made on the basis of understanding of pathophysiology of the disease, the mechanisms of action, the tissue effects of the chosen surgical treatment modality and the outcomes of randomised controlled clinical trials.29 However, most studies to date, including the few randomised controlled trials (RCTs) evaluating surgical treatment of endometriosis, have failed to give detailed technical description, standardised surgical technique or described the energy modality used. Nevertheless, major factors which should be considered in determining whether to excise or ablate include diagnostic benefit, tissue effects, haemostasis and time. 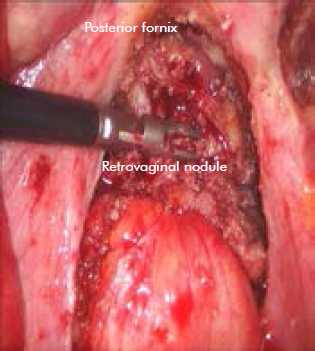 While laparoscopy is the recognised gold standard for diagnosis of endometriosis, in the absence of histological sampling, the false-positive rate with laparoscopic visualisation alone may approach 50 per cent, especially in women with minimal or mild endometriosis.30 From this point of view, excision has a diagnostic advantage over ablation for histological confirmation.31 The question of whether selective excision of some lesions and ablation of the remaining would suffice both diagnostic and therapeutic outcomes (pain and fertility) has not been addressed.

Furthermore, the choice of instrumentation and the decision to excise or ablate should not only include consideration of speed, efficacy, safety and cost-efficiency, but also haemostasis, tissue tensile strength, extent of tissue injury, rapidity of wound healing (see Figure 2). With the exception of cold scissor excision, other devices (unipolar or bipolar electrosurgery, argon beam, laser, harmonic) all involve heat energy to denature protein, leading to vascular tamponade and haemostasis on the one hand, lateral thermal spread, delayed wound healing and risk of delayed damage to vital adjacent structures such as ureter, bowel, bladder on the other hand.32

When taking the above factors into consideration, the overall theoretical and technical advantages which favour ablation over excision are speed, haemostasis, technical lenience, thus ease of adoption and generalisability, with perhaps equivalent safety but at the expense of incomplete destruction of deep endometriosis and lower diagnostic accuracy.33

In the recent Cochrane Review into laparoscopic surgery for endometriosis34, the authors identified two RCTs that compared laparoscopic excision with ablation.35,36 Wright and colleagues reported good symptom relief at six months irrespective of the treatment modality for the majority of participants in a study involving 24 women with mild endometriosis presenting with chronic pain.35 While the authors gave details regarding the surgical technique, limitations from this study include inadequate sample size, the use of a ranked ordinal scale, the use of both coagulation and cut current in the excision group. Healey and colleagues also found no significant difference in pain outcomes between the two treatment modalities at 12 months.36 However, at five-year follow-up, the same authors reported a significantly greater reduction in dyspareunia VAS scores in the excision group and a higher use of medical treatments among the ablation group.37 The findings of this well-designed RCT have some limitations including a lack of detailed description of the surgical technique, failure to specify how the endometriotic lesions were excised or ablated and a high drop-out rate at five-year follow-up.38

In terms of fertility outcome, meta-analysis of two RCTs in the 2010 Cochrane Review into laparoscopic surgery for subfertility associated with endometriosis concluded that laparoscopic treatment of minimal and mild endometriosis may improve the on-going pregnancy rate and live birth rate in couples with otherwise unexplained infertility.34 In the Marcoux study, the laparoscopic treatment involved the destruction or removal of all visible endometriotic implants and the lysis of adhesions while the choice of instruments was left to the surgeons.39 In the Group Italiano study that involved seven centres, the only description of the surgical intervention was that adhesiolysis was allowed in women allocated to resection or ablation of visible endometriosis with no details regarding whether all lesions were treated nor the choice of instruments.40 To date, no RCTs have compared whether excision or ablation improves fertility in deep or stage 3 to 4 endometriosis.

The current level of understanding and evidence does not allow us to answer the question of whether we should excise or ablate all small deposits of endometriosis at laparoscopy in terms of pain and fertility. Nevertheless, there are several practical implications which can be drawn from the limited evidence. Firstly, the use of laparoscopic surgery (excision or ablation) has been shown to improve fertility in women with minimal or mild endometriosis, but evidence is lacking in women with more advanced endometriosis. Secondly, excision offers tissue for histological confirmation while visual inspection alone followed by ablation may be associated with a higher risk of false-positive diagnosis. Thirdly, ablation is quicker, easier, less vascular and technically less demanding than excision, but is not necessarily safer than excision. Finally, general consensus recommends excision over ablation for removal of deep endometriotic lesions.41