‘Never doubt that a small group of thoughtful, committed citizens can change the world. Indeed it is the only thing that ever has.’ Margaret Mead, cultural anthropologist

My initial reaction on first seeing the ‘five-star’ luxury of the new birthing centre at Canberra Hospital was to wonder what women and midwives in Indonesia would make of such facilities. In eastern Indonesia women give birth, two to a room, on vinyl covered benches in a stark, whitewashed delivery ward.

Labour and birth are a challenge in any circumstance, but, fortunately, very few Australian women need fear dying in labour. Yet in some of our closest neighbouring countries death really is lurking at many births: bleeding; eclampsia; prolonged labour; and infection being common occurrences. To make matters worse, the facilities and skills for dealing with them are poor or non-existent. The loss of a woman’s life is no less a tragedy in these places, albeit more common. Moreover, neonatal and infant deaths are commoner when the mother has died and for each woman who dies 20 more will suffer serious morbidity.

I think perhaps the greatest challenge in women’s health in the world today is addressing the travesty of maternal mortality in the developing world, where every minute a woman dies as a result of pregnancy and childbirth. This has been recognised not only as a medical problem, but also by the UN as an issue of human rights. Of the UN’s Millennium Development Goals, MDG 5, relating to women’s health, is the one least likely to be achieved in many countries. In parts of eastern Indonesia, the official maternal mortality ratio (MMR) is 450 per 100 000, although the real figure is probably higher and certainly the Millennium Development Goal aim of a 75 per cent reduction by 2015 appears destined to fail. MMR is seen as ‘the most sensitive indicator of the quality and total functionality of the healthcare system of a country’ and of gender inequality. The reasons that women continue to die in childbirth in places like eastern Indonesia are varied and include a daunting mixture of political, economic, societal and cultural factors. The further-flung islands of Indonesia are a long way from the seat of power and a cycle of poverty, political indifference and resignation contributes to the problem.

It is a small world, and I think many of us feel a desire to do something about the obvious imbalance and inequity between the well-resourced system that we benefit from and the poverty of some of our nearest neighbours.

I have had the good fortune to be involved in two small projects organised by the Flinders Overseas Health Group, aimed at improving emergency obstetric skills in frontline midwives in a poor region of eastern Indonesia. I wrote about my Indonesian experience in this magazine three years ago.1 For our 2009 program we obtained AusAID funding specifically aimed at reducing maternal mortality in line with MDG 5. We were able, over five individual one-week visits, to deliver a program of ‘teach the teacher’ and practical hands-on training in the town of Ende on the island of Flores. The objective assessments and anecdotal feedback from that course were very gratifying and we were asked to return, in 2012, to provide a similar course in the adjoining district of Nagakeo: this program is ongoing at present.

Nagakeo is a newly chartered administrative district, located at the end of four picturesque hours’ drive, over mountainous and poorly maintained roads, from the nearest hospital at Ende. The births occur in health centres, some that lack even basic resources such as sphygmomanometers and sometimes a reliable 24-hour electricity supply. Almost always the midwives are the frontline deliverers of care to the women, many of whom are iron deficient. For some women, transport to the health centres is difficult. Others choose not to seek treatment from conventional midwives and instead are looked after by traditional village birth attendants. 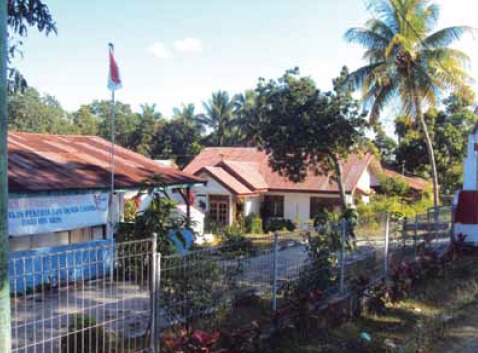 The health centre in Boawae, where the training sessions were held. 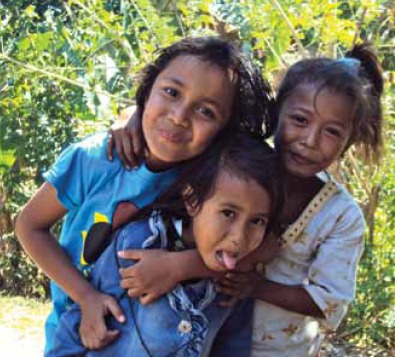 All of the midwives have only trained to level one of the three-level training structure and facilities are very basic. As was the case in Ende, this situation lends itself very well to the type of practical hands-on training we have offered. In this resource-poor setting, the timely application of simple skills can literally be the difference between life and death. Management of postpartum haemorrhage and basic neonatal resuscitation are two obvious examples. I sometimes liken this training to riding a bicycle: reading a thousand books about it won’t give you the skill, but once you have the skill it’s basically impossible to lose it, and it can be passed on to others readily.

A simple example is an exercise in estimation of blood loss, using measured amounts of artificial blood in pads, kidney dishes and so on, and having participants make estimates of the amounts and tabulating the results. We were able to show the midwives how estimation is inaccurate. Indeed, the principle that the larger the loss, the poorer the estimate applies from Queen Charlotte’s to Canberra. Everybody makes the same mistakes. Again, in their resource-poor environment, early recognition of the problem can be lifesaving and our students reported that they had simply never thought of measuring the estimation of blood loss. The expenses for this exercise are a few pads and some chocolate sauce, raspberry syrup and flour to make the blood. Similarly, a dimensional improvement in the application of bimanual compression of the uterus – a potentially lifesaving technique – requires only a simple pelvic model and a cushion. Other topics we taught include adult resuscitation and airway management (eclamptic seizures are a common event), vaginal breech delivery, dealing with shoulder dystocia and management of obstructed labour.

As a further endorsement of our 2009 course, one of the local participants, the head midwife of the Ende delivery suite, Ibu Sincé, volunteered to give up her time to come and assist with our teaching in Nagakeo. Ibu Sincé told how after the teaching we had done in Ende, in which one or two of our PowerPoint™ slides had discussed the superiority of magnesium sulphate over diazepam for the treatment of eclampsia, the midwives had insisted that the doctors change the pre-eclampsia protocols to mandate the use of magnesium sulphate. This was a major success for us, occurring in a place where the hierarchy is such that at our initial meeting it was all we could do to get midwives to sit at the same table as the doctors.

I believe that in general there is a kind of hierarchy of beneficial activities. The least beneficial thing – though still important – being the Santa Claus effect of donating things such as (often expensive) equipment. In reality, the more beneficial activity is teaching simple, sustainable and transferable skills. The icing on the cake is undoubtedly the empowerment of individuals to be agents of beneficial change, especially within a system characterised by poor infrastructure and entrenched bureaucracy. I really cannot imagine a greater reward for any effort that has gone into this program. I also believe that simply our willingness to turn up in this remote part of Flores is itself an incentive for positive change.

One of the great lessons for me has been the value of teamwork, with individuals contributing unique talents and skills to a greater whole. As well as Ibu Sincé, we have an interpreter, Yohanes Sebastianus, a local Florensian who has done a Masters of Education in Adelaide. This local input has allowed us to fine tune the program to ensure that it caters to the actual needs of the participants and that we remain culturally sensitive and appropriate. The contribution of these people to the program has been invaluable.

The personal rewards for this type of work are considerable: I often tell people that these trips are better than a holiday. Being openly welcomed, as a non-tourist, to such a different culture, in such a physically beautiful environment, is in a sense reward enough. In addition, the enthusiasm and application of the participants, and the positive outcomes that they have reported, lift our spirits. These are wonderful open-hearted people and there is always plenty of laughter across the language barrier.

We were unable to obtain AusAID funding for this second course, so at this stage the Australian participants are volunteers who pay their own expenses. Fortunately, the charity Send Hope Not Flowers, in its first year of operation, has already been able to contribute funds to the program. I think the symbolism of the celebration of a birth here in Australia contributing to improved maternal outcomes in a poorer place is powerful and we hope that this association will continue. 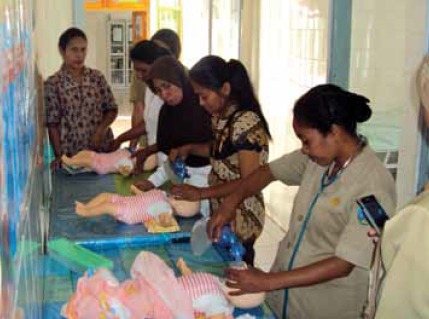 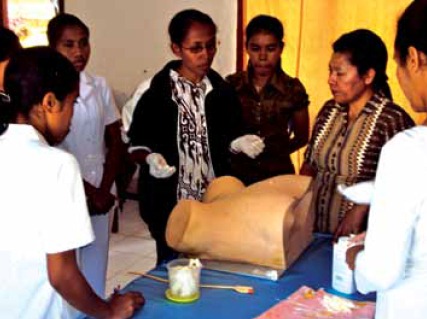 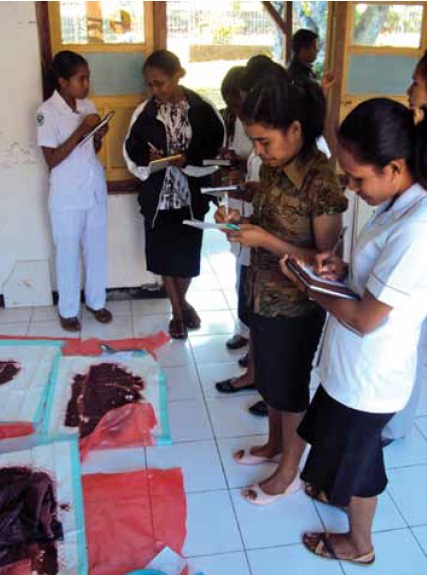 Estimating blood loss is as difficult in a low-resource setting as it is anywhere else, the difference being that here it has not previously been recognised.

The skills that are taught are simple and readily transferable and we hope that eventually we will become redundant, as our local clinical leaders take on the task of providing this teaching to surrounding areas. Clearly, the need for simple aids to the training will continue and we are also looking into the possibility of establishing a scholarship to enable midwives to travel to larger centres, to obtain level-two and -three qualifications. This would be very likely to generate a trickle-down effect on skills and confidence within the district.

In the face of the huge obstacles of poverty, poor infrastructure and bureaucratic inertia, I think that the small-scale and practical nature of this training makes it an effective and efficient use of resources. It has already led to improvements in the care of the women and the self-belief of the midwives in these districts. I believe we are developing here a model for a program that could be extended to other parts of Indonesia.