Massive perivillous fibrin deposition is a rare placental condition with a high rate of fetal demise. It usually presents in women who are otherwise well, unlike the common maternal conditions associated with placental compromise. This leads to a high risk of it going unrecognised in nulliparous patients.

Patients may travel or holiday in late pregnancy, leading to delivery in a facility other than that in which they are booked. We report the case of a nulliparous woman on holiday near term, who presented to a small rural facility with two days of decreased fetal movements. Booked at a tertiary facility, she had no apparent medical complications of pregnancy. CTG findings of surprising severity precipitated the need for urgent delivery on site. Placental histopathology confirmed a rare placental condition of unknown aetiology with a high rate of fetal demise.

Mansfield is a small rural town in north-east Victoria. It has a large influx of visitors on weekends, mainly for recreational and adventure tourism. The local hospital delivers an average of 90 babies annually. The obstetric unit has an operative delivery capacity that has been maintained because the nearest referral hospital, at Wangaratta, is 90 minutes by road. The Melbourne tertiary hospitals are three hours by road. Midwifery, medical and theatre staff participate regularly in continuing professional development (including RANZCOG’s Fetal Surveillance Education Program and simulation training) and the team approach is strengthened by a shared model of antenatal care. The only blood available for emergency cases is two units of O-negative and the town and hospital have no pathology laboratory. On Australia Day, 2014, the Mansfield District Hospital A&E and wards were busy. Theatre staff had performed an emergency caesarean section at 5am that morning. In the mid-morning,a 42-year-old nulliparous (G5P0) woman presented to A&E concerned about two days of decreased fetal movements. She was at 37+2 weeks in her only pregnancy to reach viability, and was booked for delivery at a tertiary facility in Melbourne. The A&E nurse triaged her to a midwife who applied a CTG and took her history. Her four previous miscarriages had been investigated at a tertiary recurrent miscarriage clinic, with two equivocal findings, a weakly positive (1:320) ANA titre and a factor XII of 49 (ref 50-150). Duloxetine 60mg bd had been taken throughout the pregnancy owing to a past history of severe depression.

On examination, the patient was clinically well. She was afebrile, normotensive not hyper-reflexic, had no peripheral oedema and clear urinalysis. The fundus was a 34 week size, (clinically small for dates), the presentation was cephalic and there were no palpable contractions. The CTG showed three prolonged deep decelerations, two following weak (unfelt and not palpable) Braxton-Hicks contractions (see Figure 1). A decision was made to proceed to emergency caesarean section and consent obtained. While theatre staff were arriving, antenatal notes faxed from the Mercy Hospital in Melbourne revealed a normal pregnancy until that time. It was noted that there was no bleeding or bruising during IV insertion.

In theatre, deep decelerations continued during spinal insertion (see Figure 1). Delivery occurred two hours after presentation, with the liquor having been noted to be clear and the maternal surface of the placenta unusually and almost uniformly white in appearance (see Figure 2). Apgars were 6 (at one minute) and 8 (at five minutes) and the male baby’s birth weight was 2580g (13th percentile).

Bleeding/clotting during the procedure was normal and the overall operative loss was 500ml. The baby was noted clinically to be under-nourished and, when put to the breast, fed poorly. His blood sugar level dropped to 1.4 after four hours. It was corrected with complementary feeding every three hours up to 90ml/kg/day. He subsequently fed well on the breast and on discharge, on day six, had gained 46g. As is customary in the country for Australia Day, he appeared on the front page of the local paper beside the (much larger) baby delivered earlier that morning. He has subsequently thrived (personal communication).

The placenta was re-examined and photographed postoperatively (see Figure 2). It was firm to the touch, with a predominantly yellow-white maternal surface (80 per cent of surface). Subsequent pathological and histological analysis showed ‘massive perivillous fibrin deposition (MPVFD) with secondary infarction’ (see Figures 3 and 4).

MPVFD is a rare, but serious condition and, unlike the common ischaemic placental pathologies, usually presents in women who are clinically well, making its onset likely to go undiagnosed. The term is used interchangeably in the literature with ‘maternal floor infarction’.1,2 The striking macroscopic appearance conforms exactly with the histological appearance, the densest fibrin deposition being in the basal (maternal surface) layer. 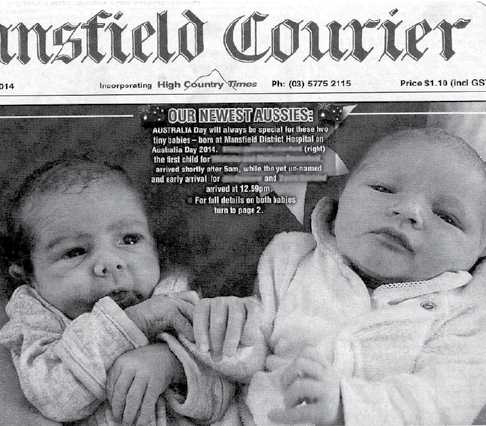 A moment of fame, the two babies born on Australia Day were front-page news in the town. Copyright Mansfield Courier (North East Newspapers): reproduced with permission. 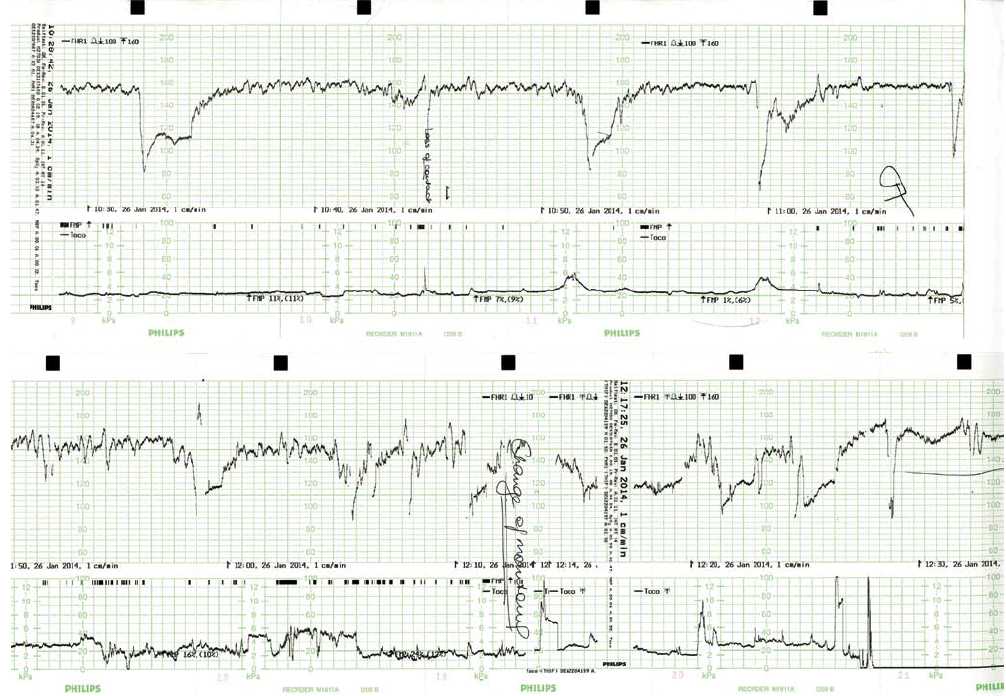 Figure 1. Maternal CTG on presentation and during spinal anaesthetic insertion. 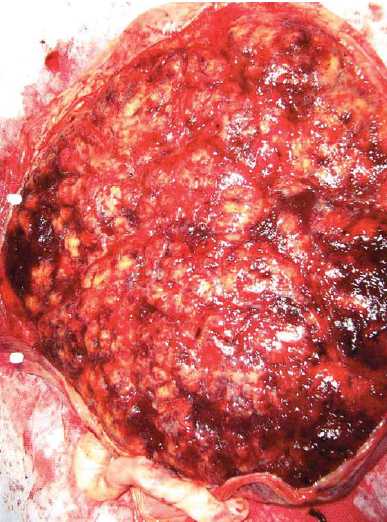 MPVFD results in high rates of interuterine growth restriction (IUGR), perinatal morbidity and mortality and recurrence. The literature agrees that the aetiology is currently unknown, and multifactorial. In a recent comprehensive pathological review, Ona et al2 postulate: ‘The microscopic features of MPVFD are highly suggestive of either direct damage to the syncytio-trophoblast and/or disturbances in the balance of dually derived intervillous procoagulant/anticoagulant factors necessary to maintain the fluid state of the blood in the maternal space.’ Possible causes of syncytio-trophoblast injury include hypoxic, toxic, infective, allo-immune and auto-immune pathologies and, with respect to clotting disorders, the anti-phospholipid syndrome has been confirmed in a number of cases.3 A retrospective controlled study of the serum of ten MPVFD patients4 has shown that a subset of patients with MPVFD have immunological markers consistent with maternal anti-fetal rejection. The term ‘fibrinoid’ is sometimes used, rather than fibrin as immunohistochemical analysis shows the deposition matrix appears to contain fibrin from both the maternal coagulation cascade and an extra-cellular fibrinoid substance derived from the trophoblast2, making the condition’s complex pathogenesis even more intriguing. It is thus likely the condition has numerous possible causes involving either/or syncytio-trophoblastic damage or coagulation disturbance in the intervillous space, each or both leading to the final common pathway of fibrinoid deposition.

The largest retrospective histological analysis, (47000 deliveries between 1991 and 1998) in northern Dublin5, was enabled by the fact that in Rotunda Hospital, the placenta is examined histologically and slides kept in all cases with an abnormal antenatal course or outcome. It found 13 cases (11 mothers), an incidence of 0.028 per cent. The fetal mortality rate was 31 per cent, delivery was pre-term in 33 per cent and all fetuses showed IUGR. Only one of the 13 was delivered by lower segment caesarean section, implying that only one was detected clinically or was detected as distressed prior to delivery (CTGs were not reviewed). Re-examination in 2002 of the placental slides with an electron microscope showed the condition to involve sclerosis of the villi by ‘true fibrin’. This led the authors to question the term maternal floor infarction, as the condition involved sclerosis of the chorionic villi as the primary process, rather than infarction. The argument that the use of the term infarction is inaccurate is supported by the more recent review of the pathological process, quoted above.2 All the fetal postmortems in the Dublin series showed definite histological evidence of hypoxia. In this series, the condition also had a high recurrence rate (18 per cent). The study acknowledges the possibility that another population may show different characteristics with respect to MPVFD. 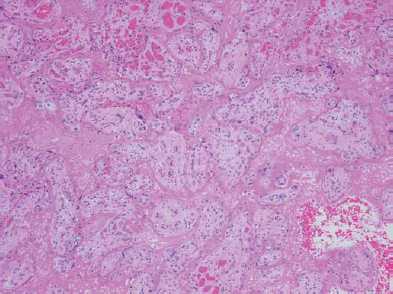 The clinical prenatal correlations of MPVFD are difficult to study, but the ultrasound triad of IUGR, low AFI and a dense hypoechogenic placenta would correlate with declining placental and fetal renal function, and the fact that dense fibrin depositions appear anechoic or hypo-echoic on ultrasound. This has led some researchers to emphasise the condition’s preventable nature, particularly where possible predisposing factors such as recurrence or recurrent miscarriage are present.6

Despite these possible clues receiving commentary in the early 1980s, the large Dublin series confirms that during the 1990s, the condition remained rarely recognised antenatally, which is hardly surprising considering its rarity. The Mansfield case is interesting as an example of being able to correlate a clearly abnormal GTG trace with this rare placental pathology. Five consistent ante- and postnatal factors correlate in this case: the mother’s (life-saving) observation of decreased movements; a severely compromised CTG; a placenta which was macroscopically over 80 per cent compromised; histological confirmation of the pathology; and the delivery of a poorly nourished baby whose clinical course confirmed diminished glycogen stores.

Small rural hospitals whose booked obstetric case load is ‘low risk’, may still need to have the ability to perform emergency caesarean section safely, especially if they are a long way from the nearest referral hospital. Occasionally, operative delivery will also prove life saving to visitors to the district, as it was in this case, or as in another recent case at the same hospital where a classical caesarean section was performed at 29 weeks for a patient with an abruption. In both of these cases, a good outcome was enabled by the presence of medical, nursing and theatre staff capable of dealing with operative obstetric emergencies.

This case highlights the need to urgently investigate a mother’s report of decreased fetal movements and for high levels of vigilance in patients with a history of recurrent miscarriage. While the mother felt in later written communication that the life of her baby was saved at the hospital, it was her own action in reporting this change which was the most crucial step in a timely and successful outcome. She subsequently sent a significant donation to the maternity unit, raised by her family in Melbourne.