Imaging safely, particularly in pregnancy – what to consider.

A woman who is pregnant, is herself no more sensitive to radiation than a woman who is not pregnant. The risk to the fetus from ionising radiation depends on:

Short-term risk to the fetus

The short-term risk is different for a fetus compared with a child or adult because it is rapidly growing. The risks include death, slowing of normal growth, abnormal growth and being intellectually or emotionally underdeveloped. The fetus is most vulnerable to radiation-induced congenital malformations during the period of organogenesis, that is weeks three to eight after conception. From weeks eight to 15 the fetus has the highest risk of radiation-induced neurodevelopmental abnormalities.

The International Commission on Radiation Protection (ICRP) has stated that these deterministic risks are not expected to occur if the exposure is <100mGy of radiation.1 Table 1 provides the expected dose for a fetus with different examinations. Even the highest dose examinations are well below 100mGy. Multiple examinations or multiphase scans are of more concern.

Long-term risk to the fetus

Table 1 shows the additional risk of developing cancer over and above the background risk (1:500 children develop cancer [risk from birth to 14 years] with no exposure to radiation as a fetus). Even if the mother had the highest dose examination the additional risk of cancer might increase three fold, in other words, the absolute risk is still low. If a high dose examination is needed for the mother and the risk of not having it is significant then it is appropriate to perform it. 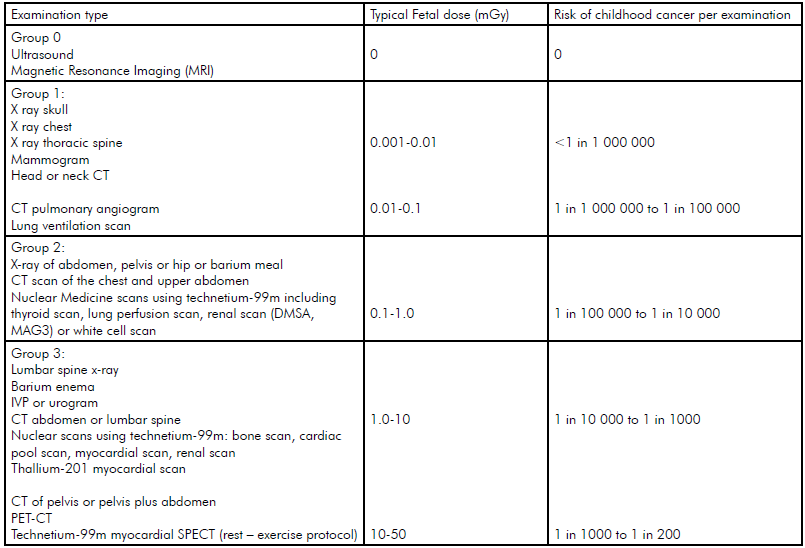 Table 1. Typical fetal doses and risks of childhood cancer for common radiology. Note: Natural Childhood risk of cancer is 1 in 500. Advice from the UK Health Protection Agency, the Royal College of Radiologists and the College of Radiographers.

The fundamental principle in imaging any patient is to keep the radiation dose to nil, or as low as reasonably achievable (ALARA). Many clinical questions can be answered with ultrasound or magnetic resonance imaging (MRI), neither of which use ionising radiation.

There is no evidence that greyscale ultrasound has any adverse effects.3 4 The thermal effect of pulsed Doppler ultrasound is of concern in embryos and fetuses and the British Medical Ultrasound Society has rigorous recommendations about the safety (T1 thermal and M1 mechanical) indices on machines.5 For this reason, pulsed Doppler imaging should be used prudently generally in pregnancy and especially in early pregnancy.

MRI radiofrequency fields generate heat, but there is no evidence of adverse effects in pregnancy, although study samples are small.6 It is unknown if higher magnet strengths (>1.5 Tesla) and prolonged imaging times may have biological effects at sensitive stages of development so it is recommended to perform fetal MRI after 18 weeks gestation whenever possible and only when the clinical benefits outweigh the potential risks.7

It is crucial that any woman referred for imaging is asked if she could be pregnant and this is particularly important in nuclear imaging or if the abdomen or pelvis will be exposed to radiation. If a woman is not sexually active it is safe to proceed with these tests. If a woman is sexually active and her period is not overdue it is considered safe to proceed with lower dose procedures (see Groups 1–3 in Table 1).8

If a woman is sexually active and is referred for a procedure that involves more than 10mGy to the uterus it is extremely important to be sure she is not pregnant and, unless it is an emergency, the examination should be delayed until the first ten days of the next menstrual cycle or until her Beta human chorionic gonadotropin (BHGC) is confirmed to be negative before proceeding. If the woman is pregnant then the potential risk of not having the test needs to be balanced against the potential risk to the fetus.

This will require close collaboration between the referring clinician and the radiologist. As mentioned, radiation risks are most significant during organogenesis: the first trimester. The central nervous system (CNS) is highly sensitive to radiation from eight to 15 weeks post-conception and doses of 100mGy may result in a decreased IQ. The CNS only becomes less sensitive to radiation after 25 weeks gestation.9 10

Very occasionally, a patient has an abdominal/pelvic computed tomography (CT) scan before realising she is pregnant. As organogenesis starts three-to-five weeks post-conception, the risk of malformation is not thought to be increased and the main risk is death of the conceptus and then only if the dose is more than 100mGy.11 12 Even if the dose is less than 100mGy, it is prudent to have a medical physicist calculate the estimated dose. Unless the embryo is older than three weeks it is likely the mother can be reassured that the effect on her baby will have been minimal.

If a test using ionising radiation is essential in pregnancy then, wherever possible, dose reduction techniques – such as lowering the miliamperes or increasing the pitch with spiral CT – are important to minimise the dose to the fetus. Diagnostic studies remote from the fetus, for example, limb or chest, can be done safely at any stage of pregnancy (assuming the equipment is in proper working order). Shielding the abdomen and pelvis should be used if these areas are not being imaged. Mammography is similarly considered safe at all stages of pregnancy.13

Is there a pulmonary embolus?

The question of how to exclude a pulmonary embolus (PE) in a pregnant patient is a highly complex one and there is no complete agreement on the best imaging pathway.14 15 16 17 18 19 It is generally agreed that a Doppler ultrasound of the legs is the first step.20 21 22 If positive, the mother can be treated for the venous thrombosis/presumed PE. If negative and a chest X ray is clear, then the difficult question is whether to do a ventilation-perfusion (VQ) scan or CT pulmonary angiogram (CTPA). There is no clear consensus on this. A VQ scan will give a higher radiation dose to the fetus (see Table 212) although the difference is less marked in the third trimester. A CTPA scan has a higher dose to the mother and this is of particular concern in younger women in view of the stochastic risk to the breasts, which are more radiation sensitive. In addition a CTPA scan in pregnancy is more likely to be inadequate (six to 36 per cent), owing to the hyperdynamic circulation and limited breath holding. Repeating a CTPA scan should be only done with caution for the reasons already mentioned. There are no known mutagenic or teratogenic effects from intravenous iodinated contrast media.23

Other important factors to consider are the local availability of nuclear medicine studies, the age of the equipment in the medical imaging department, the rate of technically inadequate studies in the local department and, perhaps most importantly, the degree of clinical suspicion (anecdotally only two-to-four per cent of CTPAs performed are positive for a pulmonary embolus). The decision of which imaging pathway to take is therefore best made after close consultation with the local radiologist. Some departments recommend a VQ scan first, others a CTPA scan. The imaging pathway from the Western Australian Government’s Diagnostic Imaging Pathways25 suggests a CTPA first in the first and second trimesters and VQ scan first in the third trimester. MR angiograms are in their infancy and at this stage are available and have not been established as a definitive test.26 27

MRI is the modality of choice for staging cancer in pregnant patients although using gadolinium is not recommended as the long-term risk of gadolinium to the fetus is not yet known.28 29 If a woman is breastfeeding, the radiopharmaceutical from a nuclear medicine study will be distributed throughout her body and some will enter the breastmilk. To avoid exposing the infant to radiation, is it best to stop the breastfeeding for a short period after the examination. Again, close communication with the nuclear medicine specialist will determine if this is necessary and if so for how long.

The decision to refer a pregnant woman to radiology should be made after considering the risks of the test to both mother and fetus versus the risks of not doing the test. The potential of the test to alter management is central and consultation with a radiologist can be helpful in determining the best course of action for the patient and in ensuring that any radiation dose is as low as reasonably achievable.