Infant and youth deaths and the role of the Coroner – an inside perspective from New Zealand.

Some of the most troubling cases that New Zealand Coroners encounter in their daily working lives are deaths of infants and children. These cases are particularly sensitive due to the understandably high levels of emotion and grief involved at the same time as coronial processes and the beginnings of investigations must start to take place. Furthermore, there is often also a strong public interest in the deaths, owing to the vulnerability of infants and children.

The Coroner’s role is to help prevent deaths and promote justice through the investigation of the causes and circumstances of sudden or unexplained deaths, or deaths in other special circumstances. Coroners also have an important role to play in the prevention of death, with the duty to make recommendations or comments where necessary that may prevent future deaths in similar circumstances. Deaths without known cause or for which no doctor’s certificate is given must be reported to the Coroner. Similarly, deaths occurring during medical treatment, or while the woman concerned was giving birth must be reported. Coroners will make a decision as to whether to accept jurisdiction upon looking at the circumstances of the case and after having taken account of any concerns expressed by medical professionals or family members involved.

The jurisdiction of Coroners is not confined by the narrow definitional scope of perinatal death. In fact, most Coroners’ cases fall outside the ambit of perinatal deaths, which is defined as deaths occurring from 20 weeks gestation, or a birth weight of at least 400g, until 28 days old. Between 1 July 2007 and 30 June 2013, New Zealand’s Coroners dealt with 216 perinatal deaths, which included deaths resulting from natural causes, Sudden Unexpected Death in Infancy (SUDI) and deaths from other external causes.

Under the Coroners Act 2006, Coroners do not have jurisdiction over stillbirths. The most common cause of infant death that does come before Coroners, SUDI, usually falls within the period of one month to one year after birth. Coroners’ jurisdiction is not constrained by any age differentiation, as infancy merges into childhood which then merges in turn into youth. Therefore, generally the scope of youth deaths will cover from birth to full legal age (generally being 18 years old). This means that the causes of deaths for youths that come before the Coroner can range from SUDI to suicide, as well as a large number of other natural and external causes.

Perinatal deaths made up about 22 per cent of those cases before Coroners of children aged five and under. Information from Coronial records (see Table 1 and Figure 1) shows the breakdown of causes of death in persons aged five years old and under (including perinatal deaths) for the period 1 July 2007 and 30 June 2013. 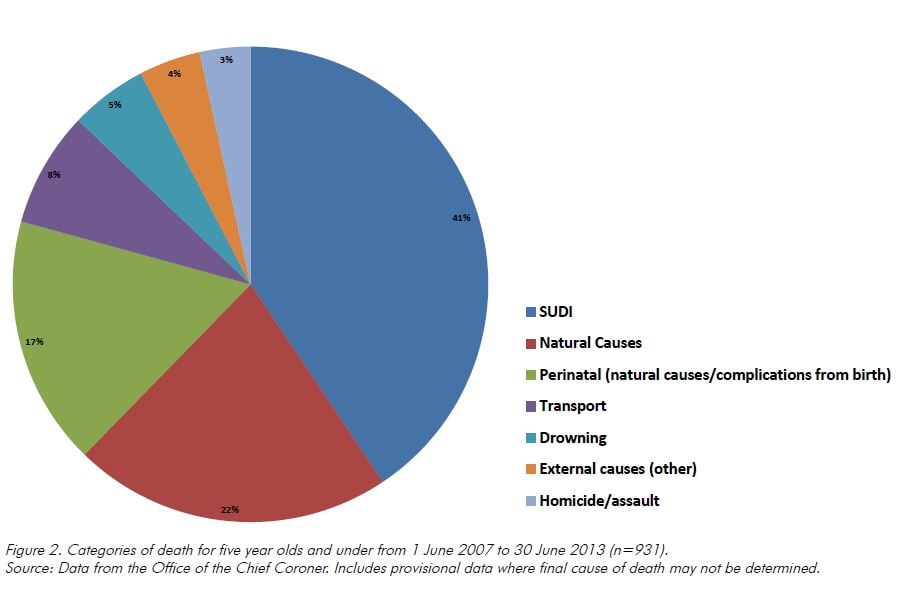 Along with many other comparable jurisdictions, there has been a dramatic drop in the death rate in New Zealand in the category of SUDI deaths. It would appear that the ‘back to sleep’ initiatives of people such as Prof Ed Mitchell, Auckland University, Safekids and others have been a substantial background factor.

Unfortunately, SUDI deaths in New Zealand have been very much a phenomenon among Maori babies, and of the approximately 60 or so deaths that come to attention each year, many occur in a co-sleeping situation. Between 1 July 2007 and 30 June 2013, Coroners dealt with close to 380 deaths of infants where there was no ascertained cause of death and a finding of SUDI was made. About 65 per cent of these involved unsafe sleeping arrangements or co-sleeping situations. Coroners have made a number of recommendations in this area. These have primarily been directed at health agencies, and those services providing information and support to parents with young infants. In recent years preventing parents from bed sharing has been met with resistance from both cultural aspects and also because it promotes breastfeeding (which is considered protective for SUDI). More detail on the many recommendations made by Coroners in this area can be found on the Coroners’ Court’s online database of recommendations found at: www.nzlii.org/nz/cases/NZCorC/ .

As stated above, a Coroner’s primary function is to ascertain the true circumstances of death and, where appropriate, to make recommendations or comments. While Coroners conduct investigations, gather evidence and present the facts, it is largely left to the experts to reach an analysis from those facts. Much effort has been put into investigating the potential role of cardiac inherited diseases in SUDI deaths, with the active encouragement of Dr Jon Skinner of Auckland Starship Hospital, and the support of ADHB LabPlus in Auckland with the Auckland Forensic Pathologists. Currently, with the assistance of a Health Research Council grant, there is an intensive nationwide case-control study of SUDI deaths under the direction of Prof Mitchell. The Office of the Chief Coroner cooperates with the study in order to contribute to a much more in-depth investigation of the surrounding circumstances of SUDI deaths.

There has been a number of emotionally charged coronial investigations in this area. The most difficult cases typically occur either after a termination where the fetus displays signs of life, or a natural or induced live birth where the baby is in a perilous state and dies shortly afterwards. Unsurprisingly, this can be a particularly fraught situation as a Coroner’s necessary involvement (whether it be in the form of making enquiries or directing a postmortem) may be perceived as an unwelcome interference at such a difficult time. Although Coroners have the jurisdiction to order a postmortem in these types of case, if it is established that a death was in fact a stillbirth the Coroner ceases to be involved.

Where the death does not fit within the definition of stillbirth, there will sometimes be a rather intensive inquiry or investigation in order to determine if the fetus did show any independent signs of life. The recent case of Coroner Matenga’s into the death of baby Adam Barlow provides a stark example of the complexities of this type of situation. Adam Barlow was a term baby who was born by emergency caesarean section in October 2009. He had been born floppy and unresponsive; however, aggressive attempts were made to resuscitate him. He died shortly after birth owing to intrapartum asphyxia. He was pronounced as a stillbirth by the paediatrician in attendance.

In December 2009, Adam’s parents felt that the midwifery care the mother had received contributed to the death of their son and they requested a coronial inquiry to be opened. Despite the paediatrician’s conclusion at the time that Adam was a stillbirth, the Coroner received evidence that Adam had been assessed by nurses as having a faint heartbeat when born. This is a sign of life and therefore Adam could not be classed as a stillborn child. The Coroner concluded that Adam’s death should have been reported to the Coroner as at the time of his birth he was undergoing resuscitation (a medical procedure under section 13(1)(c)(i) of the Coroners Act 2006). Therefore, in February 2010, the Coroner determined that he had jurisdiction to open an inquiry and consider the circumstances of baby Adam’s death.

The category of perinatal deaths forms only a small part of the Coroner’s wider responsibilities. Coroners play an important and necessary role in investigating the causes and circumstances of death, and the prevention of future deaths in similar circumstances. In the case of infant and youth deaths, the Coroner must discharge these duties while also traversing jurisdictional issues and being sensitive to the views of families at a time of tremendous grief and loss.