At birth, all newborns must transition from fetal to neonatal life, where the previously liquid-filled lungs must be aerated so they can take over from the placenta as the site of gas exchange. While umbilical cord clamping (UCC) is routinely performed at birth, the impact of abruptly removing the placental circulation during this transition is usually not considered. However, there is increasing evidence that UCC is not an innocuous act. In particular, the timing of UCC in relation to breathing onset may be crucial to optimise the neonatal transition and, for some infants, prevent significant morbidity and mortality.

What is the difference between the fetal and neonatal circulation?

During fetal life, blood returning from the body enters the right ventricle, but instead of being pumped through the liquid-filled lungs, this blood is directed, via the ductus arteriosus, to the placenta for oxygenation. Oxygenated blood returning from the placenta is shunted through the ductus venosus and foramen ovale, bypassing the right ventricle and lungs, to the left ventricle to be pumped around the body.

In the newborn, breathing onset triggers a major re-organisation of the circulation. Lung aeration at birth substantially reduces pulmonary vascular resistance (PVR), which greatly increases pulmonary blood flow (PBF) by redirecting right ventricular output to the lungs rather than the placenta. Oxygenated blood from the lungs is then delivered to the left ventricle. In this way, the lungs take over from the placenta as both the site of gas exchange and the source of blood volume for cardiac output.

What is the impact of cord clamping during this transition?

After birth, the haemodynamic effects of UCC depend on whether the lungs are aerated. At most births, the neonate quickly establishes breathing, allowing redirection of blood through the lungs to be oxygenated and delivered to the left ventricle.1 At this point, removing the placenta by UCC does not impact the infant’s circulation as elevated PBF can immediately replace blood flow from the placenta as the source of blood volume for cardiac output.2

However, prior to lung aeration, PVR remains high and so PBF remains low. Thus, If UCC occurs before lung aeration, cardiac output rapidly decreases (by around 60%) as blood supply to the left heart from the placenta is not replaced by an increase in PBF.3 4 5 Additionally, removing the low-resistance placental circulation abruptly increases systemic vascular resistance and blood pressure.1,2 Cardiac output can only be restored by aerating the lungs so that PBF can increase.6

Do we see the effects of UCC on the neonatal transition in clinical practice?

What about babies that need resuscitation?

Studies assessing neonatal outcomes of immediate versus delayed UCC excluded babies requiring resuscitation, as current guidelines recommend immediate resuscitation away from the mother. These infants are usually hypoxic and so have redirected their cardiac output to protect vital organs, including the brain. As immediate UCC dramatically reduces cardiac output, impairing this protective mechanism increases the infant’s susceptibility to hypoxic-ischaemic injury.13 Thus, infants requiring resuscitation may benefit most from delaying UCC until lung aeration is established – either spontaneously or assisted. However, this requires neonatal resuscitation to occur with the umbilical cord intact.

What is physiological-based cord clamping?

Physiological-based cord clamping uses the infant’s physiology to identify optimal timing of UCC (i.e. when spontaneous or assisted ventilation is established). For infants requiring resuscitation, this means providing respiratory support with the umbilical cord intact. Current clinical studies at Monash Medical Centre, The Royal Women’s Hospital and in the Netherlands have established equipment and processes to move neonatal resuscitation to the bedside, keeping the umbilical cord intact until adequate ventilation is achieved (Figure 1).14 15 Preliminary results demonstrate feasibility, safety and improved stabilisation in the neonate’s heart rate and blood pressure.16 17 18 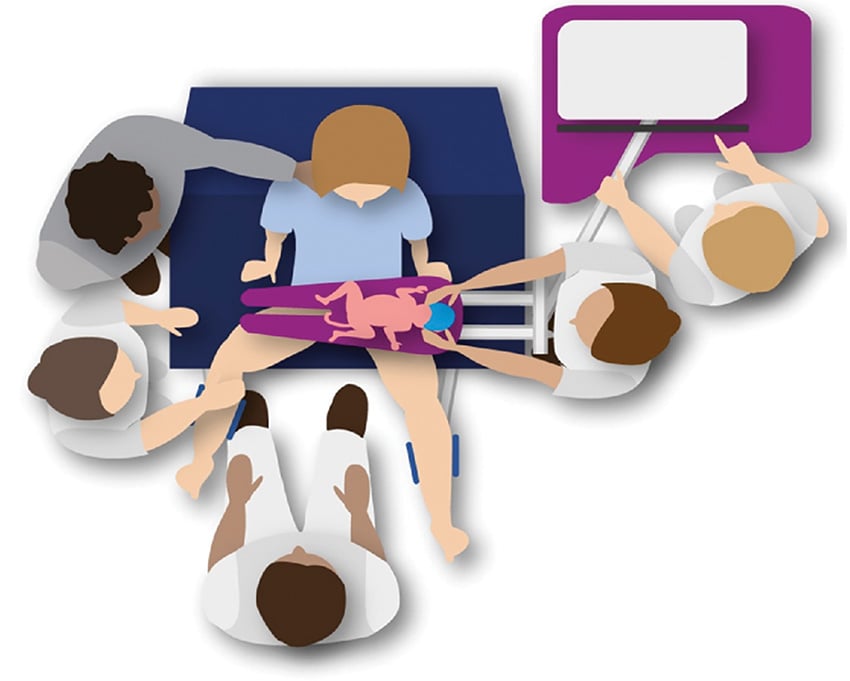 Where did immediate cord clamping come from?

Immediate UCC was adopted as a component of ‘active’ management of third stage, along with controlled cord traction and early uterotonic administration. While active management significantly reduces postpartum haemorrhage (PPH), uterotonic administration is the primary effective component.19 Indeed, routine immediate UCC does not reduce PPH, including at caesarean section, and is no longer included in third stage management guidelines.20 21 Currently, the main indication for immediate UCC is to provide neonatal resuscitation.

What about placental transfusion?

Placental transfusion refers to net movement of blood from the placenta to the infant after birth. It is unclear what triggers this change from the previously balanced fetal-placental circulation. Placental transfusion is not explained by uterine contractions, gravity, neonatal spontaneous breathing or assisted ventilation in animal studies.22 23 One theory is that compression of the neonate during vaginal delivery causes blood to move into the placenta which then re-equilibrates after birth. Regardless of the mechanism, delayed UCC significantly increases infant birth weight, haemoglobin and iron stores with reduced incidence of iron deficiency anaemia persisting up to six months of age.24 This is at the expense of increased serum bilirubin, though with conflicting data regarding need for phototherapy.25

What about cord milking?

Umbilical cord milking has been proposed to accelerate placental transfusion at birth, although few methods are effective.26 However, repetitive occlusion and release of the umbilical cord causes large fluctuations in carotid artery pressure and significantly increase the risk of IVH.27 28

What should we do now?

The World Health Organization recommends delaying UCC for at least 60 seconds in both term and preterm infants not requiring resuscitation. Cord milking is not recommended. Simple measures such as vigorous stimulation of the infant are important as most babies breathe spontaneously with these measures. Currently, babies needing resuscitation require prompt transfer to a Resuscitaire®, thus necessitating early UCC. However, pilot data suggests resuscitation with the umbilical cord intact is feasible and safe and ongoing clinical trials may change the way we provide resuscitation to infants not breathing at birth.