It is time to lock away your inner surgeon and spare a thought for conservative management of prolapse.

Pelvic organ prolapse (POP) is any descent of the anterior, posterior or apical vaginal compartments. Roughly a third of women aged 20–59 have some degree of vaginal wall prolapse.¹ Women have an 11 per cent lifetime risk of undergoing surgery for POP or urinary incontinence² and the failure rate of such surgeries is high.³

When discussing symptoms, it is necessary to distinguish between ‘physical bother’ and ‘mental bother’4, and to explore the expectations of women. Physical bother includes pelvic heaviness; vaginal bulging, incomplete emptying of bowel or bladder; assisted defecation; and interference with sexual intercourse. Mental bother refers to the patient’s mental concern that something is wrong in the absence of physical symptoms.

The 12-year follow up of the ProLong study5 illustrated that POP is a common finding in asymptomatic women, with stage 2 or more POP identified in 56 per cent of participants. Only 24 per cent of these would be considered a ‘significant’ prolapse (at or beyond the hymenal remnant). This correlates with the findings of others.6,7 Women suffering from only mental bother may find this information reassuring and not require further treatment.

A concern often raised is that POP will worsen with age and cause symptoms in the future. However, there is evidence to the contrary. Dietz challenged conventional thinking in an analysis of 971 datasets that illustrated a limited association between age and progression of prolapse.8 The weak association between age and worsening POP was reversed after menopause and POP was at least as likely to improve as deteriorate after menopause. This negates the argument of proceeding to surgery earlier, as POP does not inevitably worsen with age.

Clinicians should reassure women and explain the natural progression of vaginal changes relating to pregnancy, childbirth and ageing and not offer women treatment in the presence of a clinically diagnosed but asymptomatic POP. Options for conservative management include lifestyle modifications, pelvic floor muscle training (PFMT) and pessaries.

Delancey demonstrated the role of pelvic floor muscles in supporting pelvic organs. It would theoretically make sense that increasing the strength, endurance and coordination of the pelvic floor muscles would improve support structures in the presence of POP. PFMT improves the musculature through: firstly, strength training, increasing muscle volume and elevating the levator plate; and, secondly, timed contraction of the musculature to counteract an anticipated increase in intra-abdominal pressure to reduce the subsequent pelvic organ descent.

A timed, effective contraction of the pelvic floor muscles can reduce the occurrence of leakage in stress urinary incontinence (USI).9 Anecdotally, it is expected to have a similar positive effect on POP.

During PFMT, therapists perform a thorough examination, including assessment of the patient’s ability to contract pelvic muscles in isolation and the strength with which these contractions occur. Subsequent sessions are tailored to the patient’s specific needs. The bulk of PFMT will be performed independently and, therefore, the success of the treatment depends primarily on the patient’s commitment.

The POPPY trial10 compared an individualised PFMT program to a lifestyle advice leaflet. The trial’s primary endpoint was self-reported POP symptoms at 12 months. Women in the PFMT group showed a significantly greater improvement in symptoms at six and 12 months. These findings held, irrespective of prolapse stage, age or attitude towards surgery. Clinical improvement in POP quantification (POP-Q) stage was measured as a secondary endpoint. The PFMT group’s prolapse stage was improved and women were more likely to have a less severe grade of prolapse after six months, but these findings did not reach significance.

The Cochrane review11 of PFMT identified four trials comparing PFMT to no treatment for POP. Three of these reported on POP symptoms and a fourth only on severity of prolapse. Despite differing symptom questionnaires, all three trials showed a significant improvement in prolapse symptoms. As a secondary outcome, the clinical stage of prolapse was also improved in all three trials that reported on prolapse severity.

These findings support the use of PFMT as a treatment for women with POP. However, the results described are short-term outcomes only and there is no single regime that has been shown to be superior. Also, the minimum term required to achieve muscle hypertrophy is 15 weeks of specific directed muscle training.12 It has been shown that, even with significant improvement in symptoms, women will over time give up on their exercise regime.13

A pessary is a minimally invasive mechanical device designed to passively support the prolapsing vaginal walls. Ancient Egyptians were the first pessary users and describe POP in their scriptures. ‘Pessary’ also appears in Greek and Latin literature. Hippocrates described using half a pomegranate inserted into the vagina for POP. Pompeii yielded a bronze, cone-shaped pessary, which was presumably fastened around a woman’s waist to prevent dislodgement.14

The first recorded female gynaecologist, Trotula, developed a rounded ball pessary in 1050 AD, consisting of rolled up strips of linen inserted into the vagina. In 1559, Stromayr improved the ball pessary by dipping it in wax and covering it in oil. Ambrose Plate designed the first ring pessary in the 16th century using a combination of waxed cork and hammered brass. Hodge patented the first lever pessary using newly discovered vulcanised rubber in the 1860s. The hard rubber was replaced by polystyrene plastics in the 1950s, and more recently by silicone.14

The benefit of a pessary is immediate relief of symptoms once the correct size and type of pessary has been fitted. Indications for use include primary treatment of POP, diagnosis and pre-operative evaluation and temporary treatment of POP.15

Pessaries are divided into two groups: support and space-filling. Modern-day pessaries are manufactured from medical-grade silicone – more durable, with virtually no risk of allergic reactions.15,16 Ring pessaries are a reasonable first-line option, successfully supporting a number of defects including cystocele, enterocoele and uterine or vault prolapse.15,16 Wu et al demonstrated that the majority of patients can be fitted with a ring pessary.17 Following successful fitting of a ring pessary, patients can be managed in the community by their general practitioner, reducing the inconvenience of return visits to an outpatient clinic for pessary care (see Figure 1).

The Gelhorn is a second-line option for when ring pessaries do not sufficiently reduce a prolapse or the woman is unable to retain the ring pessary. Because of a suction effect created when the Gelhorn is inserted, these pessaries remain in place when ring pessaries have been expelled.16 This also means they are less likely to be managed in the community setting and necessitates replacement in the outpatient clinic. Many other pessaries are available, but used less frequently (see Figure 2).

A pessary should fit comfortably and the woman should be unaware of its presence; able to void and defecate without difficulty. Ideally, patients should undertake activities such as standing, walking, bending and bearing down in clinic to ensure the pessary will remain in-situ.18 Consider using oestrogen cream in the presence of vaginal atrophy and ensure an appropriate follow-up guideline is available. 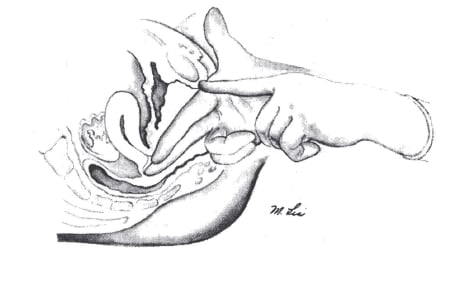 Figure 1. A guide to fitting a ring pessary: insert fingers deep into the posterior fornix; make note of where the hand comes into contact with the pubic bone; and compare to pessary.

Most POP symptoms are relieved by a correctly fitted pessary. Clemons illustrated a 92 per cent satisfaction rate at two months following pessary insertion.19 Symptoms of bulging are relieved in at least 70 per cent of cases and pressure symptoms will improve in approximately 40 per cent of cases.20 If a pessary is considered successful a month after fitting, the majority of women will continue using the pessary for symptom control at five years.²¹

Factors predictive of an unsuccessful fitting include a vaginal length less than 6cm, a wide introitus more than four finger breadths, the presence of a rectocoele, previous vaginal surgery and co-existing USI.22

Side effects of pessaries include unmasking occult USI. Clemons19 reported a 22 per cent risk of occult USI in women with stage 3 and 4 prolapse, but rates of 36–72 per cent have been reported. Other side effects include expulsion, pain and vaginal ulceration.16 The latter should be treated by removing the pessary and applying vaginal oestrogen cream until the ulceration has healed. More serious complications, for example fistula and sepsis, remain rare.18 Abdool²² compared symptoms of women treated with a pessary to women who underwent surgery at one year after treatment. Both groups showed statistically significant improvements in pre-treatment symptoms and the rates of improvement were similar in both groups. The surgical group reported a higher frequency of sexual intercourse, although this was not significant once controlled for age. The mean age of the pessary group was significantly older than the mean age of the surgical group yet they showed similar improvements in symptoms.

A cross-sectional study of the Women’s Health Initiative (WHI) trial participants quotes the risk of having a uterine prolapse, cystocele or rectocoele to be 30–50 per cent higher in women with a BMI over 25 compared to women with a BMI of less than 25.24 It has previously been shown that a ten per cent weight loss is as successful in treating USI as other non-surgical treatments and reduces incontinent episodes by up to 50 per cent.25,26 The question beckons whether a similar weight loss would herald an improvement in POP symptoms. 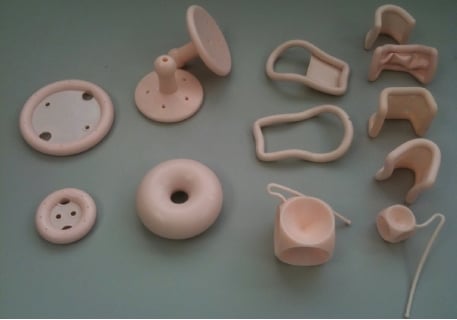 Figure 2. Some of the many types of pessary.

A cause/effect relationship exists between prolapse and constipation.28,29,30 It is unclear whether constant straining with constipation causes POP, or whether POP causes constipation.³¹ A diet deficient in dietary fibre is the most common cause for constipation.³² The recommended daily dietary intake of fibre is 20–25g³³, but most western diets contain only 5–10g per day. Lubowski showed that excessive straining for prolonged periods of time causes worsening neuropathy and pelvic floor dysfunction.30

Shariati et al³¹ demonstrated that a gradual increase in dietary fibre intake to 28g per day significantly decreased straining with bowel movements, which may decrease some risk factors for POP. The group also found an improvement in the symptom reported questionnaires of patients who suffer from a rectocoele, but also those who have POP signs other than rectocoele. Those patients who did have a rectocoele showed more clinical improvement as the study period progressed. The recommendation is for patients with a symptomatic rectocoele be trialled on a course of fibre supplementation and then referred for surgery if their symptoms are not felt to be sufficiently improving.

POP is an important public-health issue. Careful assessment is essential, with emphasis on the woman’s symptoms, concerns and expectations. Conservative management of POP is an acceptable and effective option for a number of women we see. Further research into conservative management is encouraged and the primary outcome measure should be symptomatic relief, with anatomic improvement a secondary measure.