The role of imaging in the diagnostic work up of acute pelvic pain.

The initial diagnostic work up of the non-pregnant gynaecological patient with acute abdominal pain includes the taking of a thorough history, a full clinical examination, laboratory tests and imaging.

Clinicians often request scans with one or more diagnoses in  mind based on clinical findings. The role of imaging is to further delineate this differential, guiding management that may range from conservative to medical to surgical.

Ultrasound is usually the modality of choice as it is generally readily available, inexpensive and does not expose the patient to radiation.1 In some cases, plain x-ray or cross-sectional imaging such as computed tomography (CT) or magnetic resonance imaging (MRI) may also provide further information, or help to delineate ultrasound findings.

Cyst accidents refer to the rupture or haemorrhage of physiological cysts. These two conditions are generally benign and self-limiting, and their diagnosis can help to rule out other causes of acute pain and, therefore, avoid unnecessary surgery or further investigation.

Ovarian cysts are common findings on ultrasound scan. Transabdominal (TA) scans can help to characterise large cysts, while transvaginal (TV) probes allow the sonographer to get closer to the ovaries and therefore provide more detail, particularly in regard to delineating a cyst’s relationship to the ovary and/or Fallopian tube.2

Physiological cysts are typically anechoic with thin, smooth walls and posterior acoustic enhancement.3 Cyst rupture may be characterised by the presence of anechoic free pelvic fluid with or without a simple cyst. With haemorrhagic cyst rupture fluid is more complex, appearing echogenic, with mobile debris.

The appearances of haemorrhagic cysts vary depending on their acuity. A fresh haemorrhage will demonstrate low level, uniform echoes that over time organise and demonstrate septations and/or a retracted echogenic clot.4 5

As ultrasound is a dynamic technique, probe tenderness may localise pain to pathology.

Ovarian cysts (particularly large cysts) are commonly seen in cases of ovarian torsion and it is important to attempt to rule this out in the presence of acute pain. This is discussed further below. 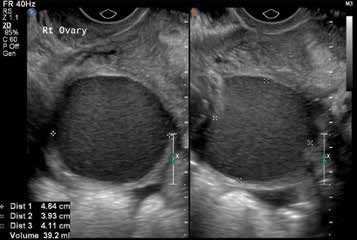 Ovarian torsion is a gynaecological emergency that requires prompt surgical treatment. It is notoriously difficult to diagnose, with symptoms and signs varying markedly between patients.7

Ovarian torsion on greyscale ultrasound is associated with enlarged ovaries that may be hyper- or hypoechoic, with enlarged, peripherally displaced follicles, owing to increased interstitial pressure and impaired lymphatic and venous drainage8 (see Figure 2). This increase in pressure also causes the release of transudate, which is seen as anechoic pelvic free fluid. Ovarian torsion is more common in the presence of ovarian cysts, particularly those greater than 5cm in diameter.9

A twisted vascular pedicle is diagnostic when present. This is seen as a round, anechoic structure with multiple concentric echoic stripes.10

Colour-flow Doppler is useful (see Figure 2). Absent arterial and/or venous flow is strongly suggestive of torsion, particularly when associated with some or all of the above findings. Flow may also be seen to be present, but abnormal when compared to the contralateral ovary.11 Cases of intermittent torsion are common and ovarian torsion cannot be ruled out even when normal flow is documented. 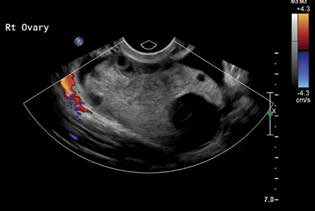 Pelvic inflammatory disease (PID) is a clinical diagnosis and may be associated with a normal pelvic ultrasound scan.12 PID may be supported by visualisation of hydrosalpinges (fluid filled structures adjacent to the uterus), free fluid or enlarged ovaries.13

Tubo-ovarian abscesses (TOA) are seen on ultrasound as multiloculated complex masses with internal debris, septations, irregular thick walls and increased vascularity. They are often bilateral and tender to probe pressure. The ovaries and Fallopian tubes are often difficult to distinguish separately, with the normal tissue boundaries between the two structures becoming indiscernible, owing to purulent material, oedema and inflammation.14

Ultrasound may demonstrate a pyosalpinx as a thickened, distended tube, and a ‘cogwheel sign’ may be noted15 16 (see Figure 3). This describes the appearance of a serpinginous tubular structure filled with echogenic fluid. The cogwheel appearance is owing to prominent endosalpingeal folds. By contrast, a hydrosalpinx is filled with anechoic (in other words, simple) fluid. 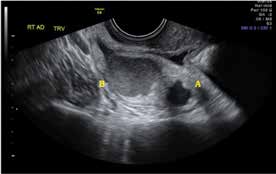 Fibroids are common in reproductive age women and may occasionally cause acute pain, owing to degeneration or torsion, particularly if pedunculated. Ultrasound is the initial radiological modality of choice. Fibroids appear on imaging as well defined hypoechoic solid lesions arising from or within the myometrium. On colour Doppler, they are relatively avascular when compared to the surrounding myometrium.17

Degeneration or torsion is suggested if the pain is reproducible by probe pressure over the fibroid. Degenerating fibroids have a more complex heterogenous appearance. Anechoic or hypoechoic cystic spaces within the fibroid are suggestive of haemorrhagic/carneous and cystic degeneration.18 Calcification is also a feature.

Large fibroids rarely can cause bowel obstruction or hydronephrosis secondary to mass effect.19 The role of MRI is to further define and more accurately characterise fibroids, particularly those in difficult locations.20

Appendicitis generally presents with right iliac fossa pain. Specific adnexal tenderness may be present if the appendix is orientated so that its tip is in the pelvis.21 Likewise, reactive pelvic or peritoneal inflammation may also cause adnexal tenderness.

On ultrasound, the appendix is variably seen. In appendicitis, it is most often seen on high-frequency linear transducer TA imaging, particularly using the graded compression technique.22 Criteria for diagnosis is a distended blind ending tubular structure >6mm in diameter (see Figure 4). There is no peristalsis and it is generally non-compressible.23  The patient is often tender to focal transducer pressure. An appendicolyth, which obstructs the lumen causing inflammation and pain, may be seen as a well-circumscribed echogenic structure with posterior acoustic shadowing (as they are often calcified).24 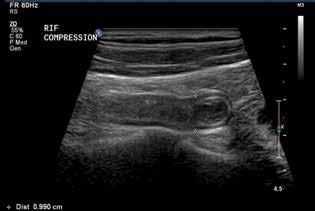 If the appendix perforates, purulent material can track into the pelvis, appearing as a complex mass separate from the ovary, although it may be difficult to delineate this on ultrasound. Transvaginal scanning to identify the ovary as separate to this inflammatory mass is beneficial.25  Soft features, if the appendix is not visualised, include echogenic intraperitoneal fat and enlarged iliocolic or mesenteric lymph nodes26.

CT is superior to ultrasound in the diagnosis of acute appendicitis with higher sensitivity and specificity.27 In patients presenting with atypical appendicitis, such as women with pelvic/lower abdominal pain, ultrasound is often the preferred modality as it is cheaper, radiation free and allows characterisation of pelvic organs.28

In an older gynaecological patient (usually >40 years) diverticulitis is another differential. These women typically present with left-sided pain. The pain may initially be experienced as pelvic pain, particularly if located in the sigmoid colon, hence referral to gynaecology.29 Simple diverticulitis is a clinical diagnosis and not seen on ultrasound. CT may demonstrate the presence of a diverticula and thickening of the sigmoid colon, with inflammatory fat stranding surrounding a diverticulum.30

Complicated diverticulitis on CT is seen as a pericolic collection, with marked surrounding inflammation and free locules of gas.31 In severe cases, surrounding structures such as the visceral peritoneum and ovaries may also become inflamed. Abscesses associated with diverticulitis may track into the pelvis and are differentiated from a TOA due to the visualisation of the ovary separate to the collection.

Mesenteric adenitis is a diagnosis most commonly found in children, but may present in adolescents as right iliac fossa pain and therefore be referred initially to gynaecology. Ultrasound or CT demonstrates multiple (more than three) enlarged ileocolic lymph nodes with echogenic fat on ultrasound or fat stranding on CT. A normal appendix and absence of other pathology in the presence of nodal enlargement and pain is often diagnostic.32

This article has described the various images associated with common gynaecological and non-gynaecological causes of acute pelvic pain. Knowledge of these appearances can help the gynaecologist perform and interpret scans and, in conjunction with history, examination and laboratory testing, aid in accurate diagnosis and treatment of our population.