Acute colonic pseudo-obstruction, or Ogilvie’s syndrome (OS), is a rare condition first described by Sir William Ogilvie in 1948 and characterised by massive colonic distension in the absence of mechanical obstruction.1 The overall incidence of OS is low (100 per 100 000 admissions), but outcomes can be life changing.2 OS is rapidly progressive and, if left undiagnosed, can lead to poor outcomes such as bowel ischaemia or perforation followed by sepsis, which carries a mortality rate of 44 per cent in perforated and 8 per cent in nonperforated group.3 4

The condition usually arises in patients with underlying predisposing factors, such as severe illness, electrolyte imbalance, use of narcotics, and surgery. It is rarely seen in young women. The most common predisposing factor in this age group is pregnancy, especially post lower segment caesarean section (LSCS). OS has also been reported after normal vaginal delivery.5 6

With increasing LSCS rates in Australia, from 19 per cent in 19937 to 33 per cent in 2013,8 the incidence of post-operative complications is also rising. OS can affect one in 1500 deliveries, with significant morbidity.9 Following an unusually high number of cases of OS in postpartum patients reported to the Consultative Council on Obstetric and Paediatric Mortality and Morbidity (CCOPMM) within the last year, Safer Care Victoria posted an alert in early July 2019 urging clinicians to be vigilant for the signs of this rare condition. In this article, the pathophysiology, epidemiology and treatment options are discussed in association with pregnancy and postpartum period.

The pathophysiology of OS is poorly understood and is often multifactorial. Current theory dictates that OS results from an imbalance in autonomic innervation to the colon.10 11 Various theories have emerged as to the relative overrepresentation of OS in obstetric patients. Some authors have suggested it results from compression of the parasympathetic plexus by the gravid uterus, others that mechanical obstruction of the recto-sigmoid colon occurs as the uterus contracts back into the pelvis. Resting sympathetic tone is increased in the third trimester of normal pregnancy and progesterone, glucagon and prostaglandins, all associated with altered colonic tone, circulate at high levels around the time of delivery.12 The transition point in OS usually occurs at the splenic flexure, an area where there is a transition of both parasympathetic and sympathetic innervation.13

While OS has been reported after normal vaginal delivery, caesarean section is the single most important risk factor in an obstetric population as 92 per cent of cases reported since 2002 occurred after caesarean section.14 In particular, emergency caesarean delivery carries the greatest risk.

We have long recognised the inhibitory effects of opiates on gut motility. Given opiate analgesia has been implicated in the pathogenesis of postoperative ileus and bowel dysfunction, it seems likely that opiates contribute to postoperative rates of OS.15 Use of anticholinergic medications and calcium channel blockers have also been suggested as risk factors.16

Clinical presentation can include abdominal distension (89 per cent), abdominal pain (60 per cent) and vomiting (27 per cent). Constipation is an infrequent feature (15 per cent) and is not required for diagnosis and, conversely, diarrhoea was present in a small number of cases. Bowel sounds are present in almost 90 per cent of patients.17 Fever, peritonitis and leukocytosis are more common in individuals with perforation or ischemia, but can occur in the absence of these conditions. A perforation and spillage of bowel contents can lead to life-threatening sepsis.

Presentation may be as early as six hours post-delivery with the majority between days 1–5.18 OS should be considered in any woman presenting with progressive abdominal distension up to 12 days postpartum.

Plain film imaging demonstrates colonic distension, especially of the caecum and ascending colon. Free air may be present if perforation has occurred, (Figure 1). 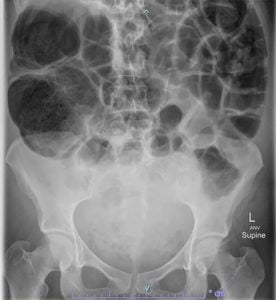 Conservative management is recommended for patients without evidence of perforation or ischaemia and a caecal diameter less than 12 cm.23 24 25 Early consultation with a senior colleague and surgical specialist is highly recommended. This approach mainly involves a trial of bowel rest, nasogastric tube insertion for symptomatic relief, hydration and correction of electrolyte imbalance, early mobilisation, cessation of contributory medications (opiates, calcium channel blockers, anticholinergics) and treatment of underlying infection. Lactulose should be ceased as this can worsen colonic distension. It is reasonable to continue conservative management for a period of 48–72 hours with frequent clinical review and serial plain radiographs every 12–24 hours.26 27 28

Early initiation of the Enhanced Recovery After Surgery (ERAS) Program has also shown that a marked reduction in opioid use, both as an inpatient and outpatient, is associated with overall improvement in pain scores post caesarean.29

Either pharmacological or colorectal decompression is considered if there is no response to 24–48 hours of conservative management or if caecal diameter reaches more than 12 cm without signs of peritonism and mechanical obstruction has been ruled out. Neostigmine is the only pharmacological treatment for OS. It is an acetylcholinesterase inhibitor that mimics the parasympathetic nervous system and causes colonic decompression.30 Given its cholinergic side effects, including bronchospasm and bradycardia, caution should be taken in patients with asthma and cardiac conduction diseases. A dose of 2 mg is delivered by slow intravenous (IV) injection over five minutes. IV administration should be in a closely monitored environment where continuous cardiac monitoring is possible and atropine should be drawn up and readily available.31 In cases where there is initial partial response or recurrence after initial response, a repeat dose may be appropriate, although no consensus has been reached on the optimal timing of repeat dosing.

Subcutaneous administration (0.5 mg twice daily) has recently shown to have a similar success rate of 93 per cent when compared to IV, with no reported adverse events and mitigates the need for continuous telemetry and high-dependency units (HDU).32 Given its relatively short half-life, and its one-off bolus dosing regime, neostigmine is unlikely to affect breastfeeding.33

As neostigmine requires HDU monitoring, colonoscopic decompression appears to be a reasonable alternative and, in some centres, may be more readily available depending upon the skillset of the surgical team. Colonoscopic decompression has proven successful in approximately 88 per cent of cases, but is associated with a perforation risk of 2 per cent.34

There are few anecdotal case reports of successful treatment of OS with erythromycin, a macrolide antibiotic known to stimulate gastric and small bowel motor activity by binding to the motilin receptor and inducing smooth muscle contraction through a nifedipine-sensitive mechanism. Its short half-life and the rapid onset of tachyphylaxis restricts its broad application in treatment of OS. There is also insufficient data to suggest erythromycin routine use in adults.35 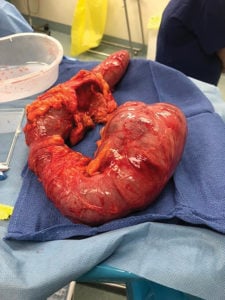 Surgical intervention is recommended where OS is complicated by ischaemia/perforation or in cases refractory to prior treatment over the course of 2–3 days36 37 38 (Figure 2).

We have designed an algorithm to facilitate an earlier recognition of this rare postpartum condition and further management (Figure 3).

OS is a rare postpartum complication with a high morbidity secondary to bowel ischaemia, perforation and sepsis. The ERAS program appears promising in improving the surgical outcome in patients with elective caesarean delivery by reducing both inpatient and outpatient use of opioids. Timely recognition of the syndrome, cessation of opioids and lactulose, early consultation with the acute general surgical team, and prompt intervention is necessary to improve outcomes in young postpartum population. 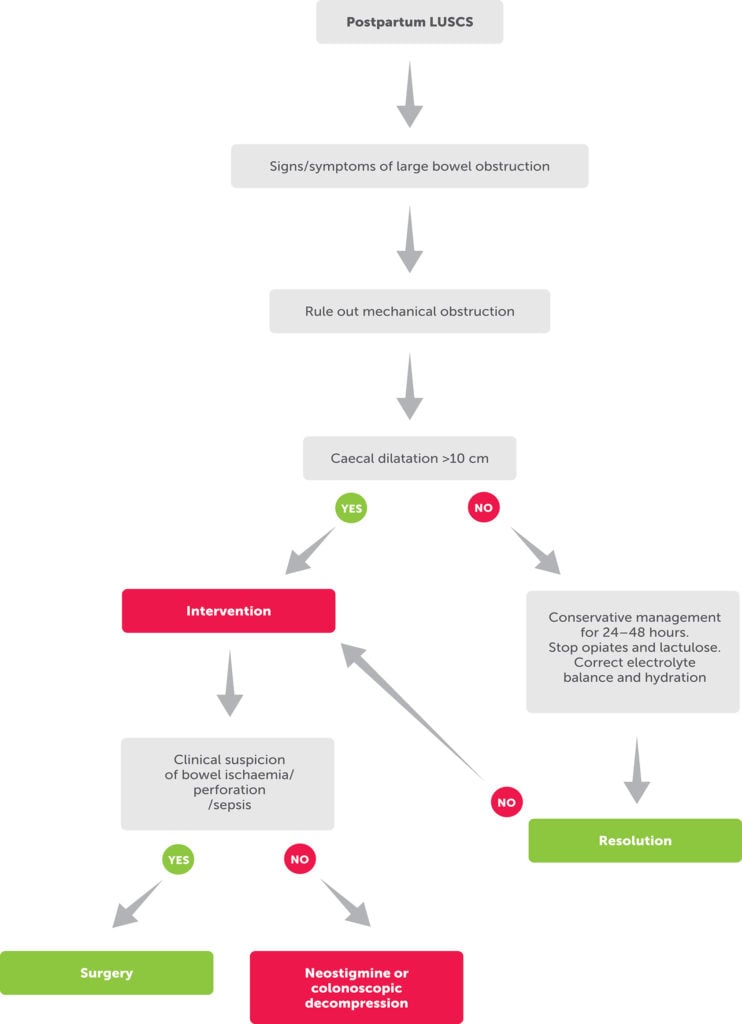