Should O&Gs give nutrition advice to their patients? Certainly, patients expect to get dietary advice from doctors, along with help to set realistic weight goals and to obtain exercise recommendations.1

The Australian Medical Association’s (AMA) Position Statement on Obesity suggests that doctors should give nutrition advice.2 It states that medical practitioners have a particular role to play in prevention and early intervention strategies. In particular, the AMA statement suggests that dietary education should be a standard component of all antenatal care and advocates that nutritional literacy needs to be increased during and after pregnancy.

Practising members and Fellows of RANZCOG deal not only with pregnant patients, but also women diagnosed with gestational diabetes, polycystic ovary syndrome (PCOS), infertility and recurring miscarriage. All of these women may benefit from discussion of nutrition.However, RANZCOG recommends referral to dieticians or other ‘appropriately trained professionals’ when we are faced with patients with nutrition requirements.3 Referral to a dietician is also suggested by many patient advocate groups and guideline developers.4 5 Are Australian medical practitioners, including O&Gs, not considered ‘appropriately trained professionals’ in the context of nutrition? Could it be construed that O&Gs who give nutrition advice are practising outside their scope of practice and potentially face investigation and discipline from Medical Boards/AHPRA?

The three pillars of evidence-based practice are the integration of a doctor’s expertise with a patient’s values and preferences, and the judicious use of the best-available evidence. The aim of this article is to address the question of whether O&Gs have the training and knowledge (expertise) to give nutrition advice; and what is the ‘best available evidence’ in regards to nutrition?

Do O&Gs have the expertise to give nutrition advice?

RANZCOG (C-Gen 19 2.1 a.1)6 states that a Fellow should have various attributes, including the ability to provide ‘independent management of the medical and clinical conditions within both the common and selected scope of practice’. Surely this applies to all management options, including nutrition advice, for patients with PCOS, gestational diabetes and obesity (in as much as obesity is associated with obstetric and gynaecologic conditions).

Through the intensive study of biochemistry, physiology, pathology and the pathophysiology of disease, all doctors obtain a solid foundation in nutrition and its effects on the human body. After some years in practice, doctors gain enormous experience dealing with various disease states and the contribution of diet to prevention and treatment.

In addition, doctors’ knowledge of nutrition is influenced by personal study of textbooks and literature searches, scientific meetings and from college or society statements and guidelines, and during continuing medical education programs.

As a consequence, it would appear that doctors are uniquely qualified to give nutrition information to patients. Is an O&G specialist any less capable of providing basic nutritional information to his or her patients than before specialisation?

The prevailing view of the establishment is reflected in the NHMRC Australian Dietary Guidelines (ADG2013).7 Several Australian organisations recommend following the ADG2013, including the Royal Australian College of General Practitioners, the Dietitians Association of Australia, Diabetes Australia, diabetic educators, endocrinologists and cardiologists. The guidelines are written for the population in general and are not meant to give guidance for those with problems such as gestational diabetes and PCOS.8

The academic team who searched the literature for ‘best evidence’ for the ADG2013 clearly recognised that the preponderance of nutrition research is from observational studies rather than level one and two studies.9 Observation studies, as we know, do not confirm causation. It is difficult to attribute the occurrence of a chronic disease to any single food or nutrient item and, consequently, any observed relationship between a food or nutrient item and chronic disease must be interpreted with care and replicated in multiple studies.10 Despite this, the ADG2013 clearly advocates low intake of fat, in particular saturated fats, and advocates multiple servings of carbohydrates per day.

While it appears that there is a degree of consensus on what is the best evidence, support for national dietary guidelines, including ADG2013, is far from unanimous. Increasingly, there are articles questioning long-held beliefs, in particular in relation to the macronutrient (protein, fat, carbohydrate) percentages in the diet. There is major dissent about whether our diet should be composed of lower or higher carbohydrate, and lower or higher fat content, especially saturated fats.

In 2015, the British Medical Journal commissioned and published a feature article relating to the development of the US dietary guidelines.11 The author questioned the scientific basis of the guidelines and highlighted multiple examples of omissions and inadequate search of the literature by the guideline committee. This provocative article attracted considerable commentary and resulted in a US Senate Enquiry into guideline development, impartiality of the committee and the robustness of evidence used to inform the guidelines.12

Recently, groups of concerned doctors and other health professionals in the USA,13 UK14 and Canada,15 have petitioned their respective governments to urgently amend their national dietary guidelines to reflect up-to-date evidence, and where the evidence is weak, to expedite appropriate research.

The task of determining what is the best available nutrition evidence has been complicated by claims that clinical research is less than perfect,16 17 18 and that evidence-based medicine has been hijacked19 and is in crisis.20 There are several books written by a variety of authors, including cardiologists, nephrologists, neurologists, generalists and science research reporters, with in-depth analyses of the problems with present dietary guidelines. There is a tendency to assume these authors are not using evidence-based medicine and that their aim is merely to generate revenue.21 This attitude seems unwarranted given the low level of evidence supporting the ADG2013.22

Moreover, in a further challenge to the present dietary guidelines paradigm, the Medical Director from the Joslin Diabetes Centre, Boston, proposes that it is time for a dietary revolution and he envisages ‘the end of the high-carbohydrates era for diabetes prevention and management’.24 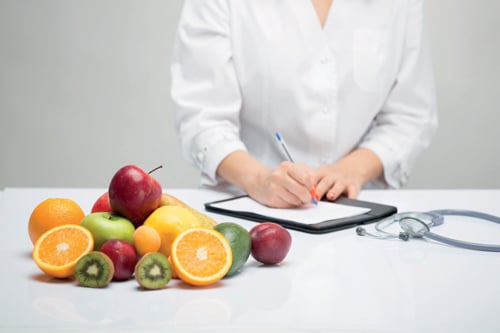 Should O&Gs be any different to general practitioners in their ability to offer nutrition advice to patients?
© Shahin Alkhazov, Shutterstock, 518583781.

Also, Feinman et al have called for dietary carbohydrate restriction to be the first approach in diabetes management.25 They give 12 points of evidence for the use of low carbohydrate diets. From an Australian doctor’s point of view, nutrition research should be considered a complex ‘work
in progress’.

The medical profession and nutrition advice

Our patients expect us to include dietary advice in the management of their health.26 However, it appears that the medical profession has delegated nutrition advice to dieticians, nutritionists and diabetic educators. Given the importance of nutrition to health, the profession should strive to reclaim and protect the central role of doctors in discussing and advising patients regarding nutrition in their overall care. Medical schools and the various specialty colleges have a responsibility to increase emphasis on nutrition knowledge from the biochemistry, physiology and pathology sciences, in undergraduate and postgraduate education, including at annual scientific meetings. This should include exploring the knowledge from, and analysis of, nutrition research, the quality and practicality of alternative views, and an understanding of the complex web of vested interests wishing to influence nutrition policy.

What are we as O&Gs to do? O&Gs who delegate their role regarding dietary advice for their patients are disregarding the fact that nutrition is recognised as a major modifiable factor for the prevention and management of patients with obesity, PCOS and gestational diabetes. Nutrition advice should be a fundamental component of care for our patients.

Some O&Gs will be comfortable with referral to dieticians or personally recommending adherence to the ADG2013. The ‘eat for health during pregnancy’27 colour brochure is easy to follow and can be printed for patients. This guideline promotes a diet of low-fat and high-carbohydrate food. While this may be acceptable for non-obese patients, the promotion of high carbohydrate intake for gestational diabetes and women with insulin resistance is contentious, as referred to above.

For those O&Gs who are persuaded by the failure of national dietary guidelines to halt the progress of obesity and diabetes, the knowledge that large and expensive trials have failed to show significant advantage for the low-fat diets, and the strength of recent evidence, it is inappropriate to continue to refer to dieticians and diabetic educators who adhere to the ADG2013. Indeed, a recent study in England shows inconsistent nutrition advice from dieticians.28 An in-depth analysis of this article is worth reading.29 Advice to follow a low-carbohydrate, healthy-fat, nutrient-dense, real-food diet is at least an acceptable strategy to advise our patients.

The right of doctors, including O&Gs, to give nutrition advice to patients must be advocated and protected. I feel it is incumbent on RANZCOG to clearly state that it is within their scope of practice for O&Gs to give nutrition advice to their patients. In addition, it should be considered acceptable for information regarding nutrition to be given that may be outside ADG2013, but is supported by more recent evidence.

Good nutrition is important for general health and the prevention or amelioration of obesity and many chronic diseases.  The medical profession should reclaim its central role in all aspects of patient care and must regard nutrition advice as a central component of care. This is what our patients expect.

O&Gs have the training, experience and expertise to consider giving basic nutrition advice to their patients. O&Gs should adhere to the triad of ‘evidence-based practice’ by using their expertise, the values and preferences of their patients and the judicious use of nutrition evidence. At present, deciding what is the ‘best-available evidence’ from the clinical research in nutrition is contentious. The evidence, such as it is, should be limited to assisting the clinical decision-making, rather than overriding it.