I am an advanced trainee with RANZCOG; now part way through my fifth year of training. I was lucky enough to have my first baby in June of this year. My decision in regards to whether to try for a vaginal birth or to opt for an elective caesarean was a difficult one, and I changed my mind numerous times during the course of my pregnancy.

Firstly, I should say that I am a healthy woman in her mid-30s who had a low-risk pregnancy with no complications other than a baby who was large for gestational age (LGA) over serial ultrasound scans.

I was initially set on the idea of an elective caesarean. I am naturally risk averse and liked the element of control that an elective caesarean lends. I had spent the last two years doing tertiary obstetrics and had been exposed to many a labour horror story. I remember being around 26 weeks, sitting in handover and hearing about a woman who had been transferred to our hospital postpartum after having a Kiellands forceps delivery, fourth-degree tear and a baby with intracerebral haemorrhages in the NICU on ventilation. I looked at my colleagues in horror as they attempted to allay my fears with comforting looks and mutterings of ‘That will never happen to you.’ I knew all too well it could. Labour can be a bitch and she does not discriminate.

To add to my aversion at the prospect of labour, I was doing a urogynaecology term during my mid-pregnancy. Seeing woman after woman with urinary incontinence and/ or pelvic organ prolapse did not enhance my faith in the idea of a vaginal delivery. I quite like my sphincters intact; all of them. I don’t want my levator avulsed and the prospect of having a procidentia in later life certainly does not appeal.

Despite all this, by the time the third trimester came around and I was waddling to and from the birth suite, something changed. I started to think I would attempt a vaginal birth. I knew all the things that could go wrong, especially with a baby who is LGA, but I also knew that for the majority of women, things go well or only minor complications occur. I was reluctant to commit myself to the recovery and pain involved with having a laparotomy, as well as possible complications if I were to need abdominal surgery in the future. I had a discussion with my obstetrician whom I trust completely. I told her that I wanted to try for a vaginal birth, but that I wasn’t interested in any heroics. If she thought things were heading towards an emergency caesarean, I wanted that call to be made sooner rather later, before the risk of complications increased. I had three big fears in regards to vaginal birth:

I knew we couldn’t guarantee avoiding these, but I felt that if we had a low threshold to revert to caesarean delivery, the risk would be minimised.

As it happens, I had what was later described by a friend of mine as ‘the Ferrari of labours’ – luxurious and fast! I was induced at 38+5 for an LGA fetus. I had six hours of syntocinon, an epidural after three hours and, after only 17 minutes of pushing, I had a vaginal delivery with a beautiful baby boy with Apgars of 9 and 9 and only a first degree tear to show for it all (other than the aforementioned beautiful baby boy)!

The decision as to whether to attempt labour or have an elective caesarean section is an extremely personal one and is undoubtedly influenced by our level of knowledge of the risks and benefits of each mode of delivery as well as by our experiences and personal biases. 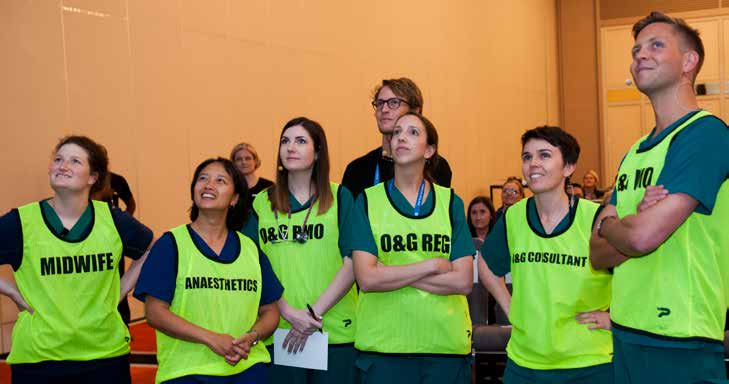 Collaborative care takes on new meaning when a doctor becomes the patient. (Photo taken during the Sim Wars session at the RANZCOG 2016 ASM.)

There is obviously no wrong answer to the question of ‘caesarean section or vaginal delivery?’ as long each woman is adequately informed of the risks and benefits of each in her particular situation. Prof Dietz and Dr Woodrow wrote an article in the Consent issue of this magazine in which they discussed that we, as obstetricians, have a duty to disclose the risks of vaginal birth with pregnant women just as we would discuss the risk of caesarean section during the consent process. This is an approach I strongly support. Each woman has her own threshold for the degree of risk with which she feels comfortable, as well as her own ideas about what is important during the birthing process. The most important thing we can do as obstetricians to assist a woman in this decision-making process is to educate her about the real risks of both options and support her in her decision as much as possible.

Without the knowledge that both caesarean delivery and vaginal birth can be dangerous, my decision would have been easy, but based on false assumptions. There were obvious risks to the courseof action I took. There was no way to guarantee that I wouldn’t have significant soft tissue damage, that I wouldn’t have ended up with a complicated second-stage caesarean and who knows, I may still end up with a pelvic organ prolapse in the future. The important factor here is that I knew all these complications were possible when I made my decision about the way I wanted to deliver my baby and I therefore took, and continue to take, ownership of those potential complications.

Another important aspect of my antenatal and intrapartum care was the element of control I felt I had. Knowing my obstetrician and having discussed with her my fears and the way I wanted to proceed if things were not going well helped me to feel safe during the entire process. Not all patients will have the capacity nor the inclination to go through the possible scenarios that may occur during labour and what the management options would be, but the idea of open communication was vital for me as I’m sure it is for all women.

Open and honest communication should always be something we strive to achieve with our patients, but since going through labour myself and understanding what a difference it makes to the experience, I will make even more of an effort to ensure that women and their loved ones understand what is happening during their labour, are involved in the decision-making process and, importantly, have their fears heard.

They say knowledge is power and I certainly felt more empowered in this decision than many women do. Perhaps it is time to empower all our patients to ensure they have as much input into the very personal decision of the mode of delivery of their babies as they do over other areas of their healthcare.