There is nothing new about vaginal hysterectomy (VH) with morcellation. It was widely practiced in Europe in the late 1800s because it was safer than laparotomy.1 However, no one taught me how to morcellate a uterus at VH, so I had to develop the technique myself over the decades. My VH technique – or more correctly, that of the late AG Bond – I have already published in this magazine2 and presented on Climate3 and should be read in conjunction with this account. Box 1 is an extract of a pathology report on a recent, typical case of morcellation with VH. The patient could have gone home the next day had she not been living in a rural area. Fibroids and/or adenomyosis are the commonest causes of the need to morcellate.

Box 1. Extract of a pathology report on a recent, typical case of morcellation with VH.

As in the case in question, the usual indication to morcellate a uterus at VH is inability or difficulty reaching the third (and last) uterine pedicle (broad, ovarian and round ligaments and fallopian tube) due to uterine size. Morcellation should not be considered until both uterine arteries (second pedicle) are ligated and divided. If this latter stage cannot be completed, an approach from above is the safest course of action.

With the assistant pulling the cervix to the patient’s right, an incision is made in the uterine body to the left of the midline through to the back of the uterus and down to the vagina (Figure 1). The scalpel blade should be visible while in use – blind cutting is to be avoided. Next, with the assistant (or scrub nurse) pulling the cervix to the patient’s left, a symmetrical incision is made through the uterus to the right of the midline. It is a bonus if this enables bisection of the uterus, because one side can be pushed up enabling easy access to the last pedicle. Failing bisection, accessible uterus can then be grabbed with Morrison’s forceps (Figure 2) or, if a fibroid is exposed, a vaginal myoma screw (Figure 3) and the fibroid can then be enucleated. This enables excision of further uterine tissue and is repeated until the uterus is bisected and managed as above or the final uterine pedicle becomes accessible. 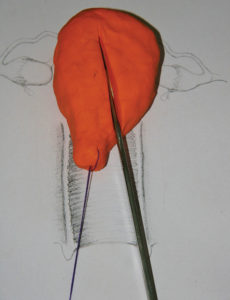 Figure 1. With the assistant pulling the cervix to the patient’s right, make an incision to the uterine body to the left of the midline through to the back of the uterus and down to the vagina. 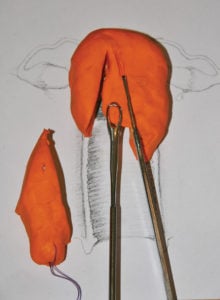 Figure 2. The cervix has been removed and the remaining uterus is pulled down with Morrison’s forceps, enabling further excision towards the fundus. 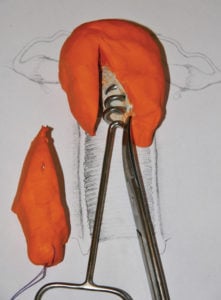 Figure 3. If a fibroid is exposed, a vaginal myoma screw can be used to enucleate the fibroid.