In an ongoing verbal autopsy survey, conducted in the Milne Bay Province of Papua New Guinea, maternal mortality cases are being investigated to find out why women suffer fatal delays in receiving appropriate obstetric care.

Papua New Guinea (PNG) has some of the worst maternal mortality (MM) statistics in the world and the lifetime risk of dying in pregnancy for a PNG mother is one in 20. That’s hard to imagine when you consider the same risk if you’re a mother in Australia is one in 10 000. In a province that has 12 300 births a year, only one in six mothers will have a supervised delivery at a rural health facility.

A survey of all MM cases in Milne Bay Province found that, of the 31 cases examined, five women were having their first baby while three were having their sixth child. Their age group was normally distributed between 18 and 35 years and none had had previous complications in pregnancy. Women having their first baby were choosing to deliver in a health facility, but subsequent deliveries were more likely to be village births. Previous uncomplicated pregnancies no doubt give women confidence to deliver in the village in subsequent pregnancies. Haemorrhage was by far the most common cause of maternal death. Out of the 20 mothers that died from haemorrhage, 11 suffered postpartum haemorrhage (PPH), six had retained placentas and three had antepartum haemorrhages (placenta praevia). Other causes of MM were sepsis, ectopic pregnancy, toxaemia, CVA, pneumonia and TB.

The three-phases-of-delay model was chosen to classify factors associated with maternal deaths. This model defines socioeconomic/cultural factors, accessibility of facilities and quality of care as key indicators affecting utilisation and outcome.

You will note the sums don’t add up; this is because some women experienced delays in all three phases.

Which delays were critical to the outcome?

Occasionally, there was more than one delay that could be seen to play a critical role and then both phases were counted as critical. In summary then:

In one-third of cases where phase 1 factors were critical, the progress of events was so rapid that opportunity for further intervention was limited. Something might have been done for these mothers if they had already been admitted for confinement in a waiting house and could have their delivery supervised by a skilled health worker. Mothers who passed away within a short time on arriving at a HC were probably already too unwell to resuscitate and the difficulties of getting IV lines into a mother in shock made the opportunity for resuscitation in a HC almost impossible.

Whether a mother dies in the village was the only factor that comes close to significance (p=0.08) with respect to male dominance:

The key indicators were whether the husband made the decisions in two of the above responses and/or there was evidence of occasional wife beating. Using male dominance to equal a score of more than two, or evidence of beating, there were 18 village deliveries and 11 mothers died in the village. Eight of the 11 mothers were in a male-dominated relationship.

While the difference between eight from 16 and three from 15 seems like it should be important, it does not quite reach significance here, but it indicates a trend (if the same proportions were maintained, a total number of 45 cases would be needed to reach significance). Association does not prove causality. There appears to be an association with male dominance, but this association is likely to be with an overall cultural background and not just male domination.

If men are part of the equation for PNG’s dismal maternal mortality figures then they must also be part of the solution. Men have traditionally been excluded from antenatal clinics and this must change. Well-informed husbands, with basic knowledge of the birthing process and danger signs around time of delivery, could adopt a more proactive role. Men’s health groups conducted in conjunction with each antenatal clinic must emphasise the importance of planning a supervised delivery and promote family planning and the ideal PNG family of two or three children, instead of five or six.

The other contributing factor was the cultural practice of village nurses waiting for the mother to expel the placenta without assistance or until the mother asks for assistance. This request confers an expensive customary payback later, as the woman’s family are obligated to compensate anybody who had to touch her blood or private parts. The perceived seriousness of the complication was another cause of long delays in the village. Perhaps surprisingly, there was no significant association between the husband’s or mother’s level of education and the phase 1 delay to seek help. Similarly, the availability of money (economic status) had no significant influence on delay to seek help, although intuitively one might expect the lack of it would be a big disincentive to seek help. Most mothers (and husbands) in fact rely on the generosity of others and local business people to provide assistance (stretcher carriers, dinghy with outboard motor and fuel) when they have a difficult delivery, and they usually get it.

Although 22 of 31 questionnaires report at least one level of dissatisfaction with their health centre and 13 had two or more negative responses, there was no correlation between perception of healthcare and whether phase 3 factors were likely to have an impact on the delay in the village (p=0.6).

The phase 3 delay in effect was from the time of arrival to maternal death in all cases and ranged from 30 minutes to six days. From personal testimonials and patient admission records, lack of basic drugs and supplies, lack of suitably trained staff and poor management of obstetric emergencies were the identifiable causes. Sixteen women made it to a health facility and then died.

Lyneth was a 32-year-old P4 G5 who delivered a live male infant in Lomitawa village on 3 February 2009. Lomitawa village is a two-hour flat walk followed by a three-hour strenuous climb from Sehulea HC. Her four previous village deliveries were all normal. She was technically an unbooked mother, but she had attended two or three antenatal clinics when they were conducted near her village. She was given an expected date of delivery (EDD) and asked to come to the HC for delivery. Lyneth walked to the health centre two days before her EDD. On arrival she was told by a health worker that her dates were wrong and she wasn’t ready to deliver, so she walked back to the village. Two days later, Lyneth went into labour at 4am. The baby was delivered normally at around 10am and was placed beside the mother with the cord still attached to the placenta. The placenta failed to be delivered and Lyneth started to bleed. The three sisters-in-law in attendance sat her up to allow the placenta to come out and rubbed her fundus, but they did not try controlled cord traction as this involves them viewing the exposed perineum and touching the mother’s blood. For in-laws to actively pull on the cord requires a directive from the mother according to local custom, but Lyneth said nothing throughout the birthing process. She was given traditional herbs used to stop bleeding, but there was no change. After Lyneth had been bleeding for three hours, the birth attendants told the husband, Nepin who was waiting outside, that Lyneth was still bleeding. Nepin realised that Lyneth had a problem. Nepin first went to Lyneth’s relatives to explain what was happening and ask for help. They live about an hour’s walk away from Lomitawa village. As they were busy working in the garden, they told him to make a stretcher and take Lyneth to the HC, but they couldn’t help at that time. Nepin hurried back to Lomitawa village to make the stretcher, but was met on the way by a messenger saying that Lyneth had passed away. The baby’s cord was cut after the mother died. About six hours had passed since delivery. 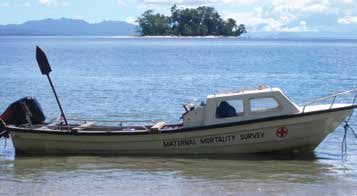 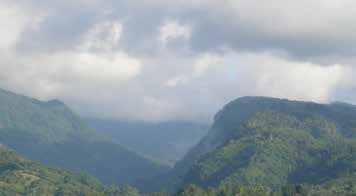 The view from outside Lyneth’s nearest health centre, Sehulea. Lyneth’s village is up on the ridge hidden in the clouds in the background.

One obvious question arose from this survey: why do women attend antenatal clinics, but when it comes time to deliver they prefer to deliver in the village? Reasons given by mothers for delivering at home clustered around five major concerns. They are confused over their estimated date of delivery and do not like to present too early due to their homemaking responsibilities. The cost of delivery in a health centre is 5–10 kina ($2–4.50), which is simply too much for most village mothers. Village women feel shy at presenting in an impoverished state and not having baby’s clothes. They find it hard to communicate to health staff and find them unfriendly in many instances. Most health facilities have poor washing and toilet facilities and lack decent waiting houses and, as such, are not mother-friendly places for confinement.

Antenatal clinics are conducted in health facilities and also in villages by health staff on patrol. It is convenient for mothers to attend a village antenatal clinic, but not to walk long distances to a HC for delivery. As one Walibe Island mother beautifully pointed out:

It is simply more convenient to have a village delivery, except when a problem is encountered, as is the case with all homebirths. Encouraging mothers to have a supervised delivery and encouraging staff to adopt mother-friendly attitudes will require a radical rethink on how we offer antenatal services to mothers in the rural setting.

The Sehulea HC, where Lyneth should have had her baby.

Most Milne Bay Province women who die in childbirth die from preventable causes. They may choose to deliver in the village for reasons of convenience or they may get ‘trapped’ in the village unexpectedly, because of early onset of labour, and then suffer delay factors that are strongly associated with PNG’s gender imbalanced society. In addition, poor utilisation rates of the existing health facilities, poorly equipped and maintained health centres, health staff who lack clinical skills to deal with obstetric emergencies, and the inability of the provincial hospital to respond to obstetric emergencies in a meaningful way are major factors contributing to the high mortality rate in Milne Bay Province. Innovative solutions such as demand-side financing and offering baby bundles at time of delivery may change the delivery choices of mothers and should be trialled in selected areas. Making oral misoprostol available to mothers who are approaching delivery and live far from a health facility will save lives. Regular training of health staff in dealing with obstetric emergencies and placement of midwives in ‘hot spots’ while also improving direct communication to a referral obstetrician can make a difference. Finally, family planning and family completion services need to be freely available.

If we can change the delivery preferences of mothers in Milne Bay Province and, at the same time, improve midwifery skills of health staff and delivery conditions at health centres, it would mark the turnaround of the forever outgoing tide of the health system in Milne Bay Province, if not PNG. PNG has an enormous task ahead if it is to lower its MM and achieve the UN Millennium Development Goal 5 (improve maternal health) by 2015 and time is fast running out. All women and some men would agree.

The current MM study in Milne Bay Province will continue until 2015.