‘Dr Jared, Dr Jared. You are needed in maternity.’ For a few seconds, I am confused. Where am I and who is that calling me? I then remember ‘Oh, Jahun!’ It is the MSF Watchman that has come to my bedroom door and is gently knocking to let me know that I am needed. I go to get out of bed, once again forgetting about the mosquito net, and have to do a dance to unceremoniously untangle myself from it. I quickly put on my scrubs, boots and head out to the gate. I can see the driver and the anaesthetist, who has just arrived from the UK, already in the car, engine running. Oh, it is never a good sign when they call us both, I think.

It has already been a busy day in Jahun Hospital. Located in Jigawa State in northern Nigeria, the Jahun Project is a collaboration between MSF and the Nigerian Ministry of Health. Since 2008, MSF has operated Jahun General Hospital’s maternity unit. This includes a vesicovaginal fistula ward for fistulae repairs, a NICU for babies born at the hospital, as well as two theatres, an ICU, and delivery and postnatal wards. Currently, the hospital delivers more than 6000 women a year with a very high acuity, as the majority of women arrive at the hospital extremely late and unwell. Many women still attempt home births with local birth attendants or seek advice and treatment from traditional medicine people, so presenting to the hospital is often the last resort.

Nigeria is ranked as one of the 20 worst places in the world to give birth, with a country-wide maternal mortality rate of 820 per 100,000 people. However, there is a large disparity across the country, with local figures in northern Nigeria demonstrating a staggering stillbirth rate of 15 per cent. The maternal mortality rate is well over 5000 per 100,000 women, which is potentially one of the highest maternal mortality rates in the world. Thankfully, through the collaboration and the work of the MSF outreach midwives and the hospital’s growing reputation, this is changing, with more women presenting for antenatal care and earlier in their labour.

With it being malaria season, the hospital has been quite busy and often seems chaotic. Already today I have delivered a vaginal birth of triplets and supervised six vaginal breech deliveries, and we have lost count of the number of twins. At least ten women have presented with symptoms of anaemia from malaria or postpartum haemorrhages (PPH), often with haemoglobins of less than 30. I have performed eight caesareans sections, with two ending in hysterectomies, and repaired three ruptured uteri. Sadly, we have also had a death today: a woman who presented with a PPH and was already in disseminated intravascular coagulation (DIC). The local staff are quite used to expats seeming quite shocked on their first day, and jokily greet new staff with ‘Welcome to Jahun Paradise!’ I wonder what else Jahun Paradise has in store for us tonight.

On arriving at the hospital, the anaesthetist and I are directed to the pre-delivery ward. As we enter, I am instantly drawn to the readings on a monitor attached to the patient in bed two. She is the only patient not sharing a bed tonight; most other beds have three patients. The blood pressure shows 194/114 and even more concerning is the oxygen saturation of 80 per cent, despite the oxygen concentrator set to max. ‘Jijiga?’ I ask the midwife sitting at the desk. She nods her head. ‘Not again,’ I sigh. Jijiga is the local Hausa word meaning ‘to shake’ and what everyone calls eclampsia. Jahun has an extremely high rate of eclampsia, with often four or more patients presenting with jijiga each day. This mother is aged 21, para 3 and delivered one day ago at home. She now presents after three seizures with likely pulmonary oedema and cardiac failure. Her haemoglobin is 35, a spot test for malaria positive, and she is using every accessory muscle just to keep her saturations at 80 per cent. The staff are trying to help her stay sitting up as this has raised her saturations, but she is quickly tiring. I scan her abdomen to ensure there are no retained products or other confounding problems and, while I do not normally venture out of the pelvis with my ultrasound probe, even with no training I can see the pleural and cardiac effusions and poor contractility of the heart. She is in trouble, big trouble. 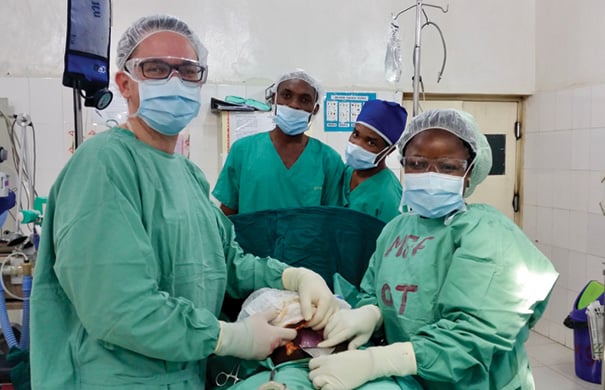 The theatre team, made up of a local nurse anaesthetist, two scrub nurses and expat obstetrician.

This follows on from three other cases this week of severe eclampsia that have resulted in maternal deaths. All mothers were aged less than 20. Patients often present in advanced stages of the disease due to having limited transport options, having to wait for their husband to give permission or escort them to hospital, or trying traditional medication first. The other cases had also developed pulmonary oedema and renal failure, which resulted in electrolyte disturbances and then cardiac arrest. All the cases so far had taken traditional medications, which may actually worsen the outcome as these teas and herbs appear toxic on their own. For this mother, under the guidance of the anaesthetist, we started frusemide and an infusion of glyceryl trinitrate and moved her to the ICU. I rang the medical coordinator to keep him abreast. ‘I think we may have another maternal death from eclampsia and potentially traditional meds,’ I informed him. ‘Not again,’ he sighed. This was becoming all too common.

A rare moment in pre-delivery where beds don’t
have three patients each.

I have now been on placement with MSF in Nigeria for a month. Since medical school days, I have always wanted to work for MSF, but the real journey started about two years ago. I was attending the FIGO World Conference in Vancouver and MSF had a booth at the trade show. There, I chatted to an obstetrician who was one of MSF’s medical advisors and was very surprised to discover she worked in Sydney with other advisors on women’s and child health. She discussed the application process and opportunities to work with MSF.

After completing my RANZCOG Fellowship, I submitted my resume and an essay on my motivation to work for MSF. I was then invited to Sydney for an interview regarding aspects of working for MSF and in humanitarian medicine. Passing the interview, I attended a week-long training course in Sydney, which covered many topics of working for MSF and in developing countries. Finally, I was matched with Jahun, and my employer in Australia was very supportive. I soon found myself back in Sydney for a predeparture briefing and then flew out to Abuja, the capital of Nigeria, full of nerves and excitement.

Back to that night: I missed the ward round the following morning as I was caught up in theatre. The next time I made it to ICU was for the evening ward round. As we changed into our ICU shoes and lab coats, I noticed the patient in bed five was breastfeeding her baby and she looked familiar. The patient had an oxygen mask on with a high respiratory rate, but seemed to be talking in short sentences to her neighbour. Looking more closely, I was surprised to find it was the patient from the night before. She was not only alive, but appeared to be improving rapidly. I think the anaesthetist noticed my surprise and joy, and whispered, ‘The jijiga did not win this time.’ As I went over to see her, I also recognised the patient she was talking to in the next bed. ‘Is she the uterine rupture who presented with a haemoglobin of 21 and DIC?’ I asked. ‘Yep,’ the anaesthetists smirked and teased, ‘and she looks better than you, hey?’ I had to agree with that, glad too that it was now my night off, and I could rest.

Working for MSF and in Jahun has been challenging and difficult, with even a few tears shed, but I can easily say it has been the most satisfying six weeks of my career so far. Yes, you can only do so much, as many of the issues are due to complex social determinants of health, but if you are up for a challenge, want to use your general skills, learn to rely on your examination findings, and see and treat conditions you have only read about, MSF may be the answer. In Australia, you may feel really appreciated when a patient tries to give you a bottle of fine wine or champagne, but wait till a patient tries to give you their food ration for the day as a thank you. It is often all they have, and it means they would go without food. You then realise and appreciate what you and MSF means to these patients. I have also received a lot from working in Nigeria; friendships, skills, knowledge and the satisfaction of knowing I am making a real difference in these people’s lives. For many of these patients, it is only MSF and their staff that stands between them and death. We often joke about Jahun Hospital being a paradise, but for the patients it really is their northern Nigerian desert paradise.

Having been home for about a week, the question I am most often asked is ‘Will you go back? Will you work for MSF again?’ My answer is simple, ‘I already have my next placement booked.’ 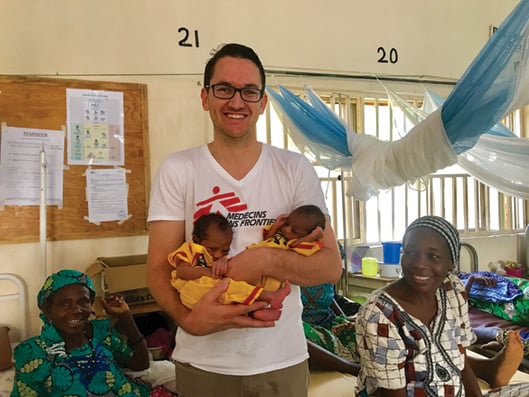 Médecins Sans Frontières Australia is currently looking for O&Gs to deliver medical assistance to the people who need it most. You must be able to commit to a minimum placement of six weeks and be a resident of Australia or New Zealand. Find out more at www.msf.org.au/join-our-team/work-overseas.