Ms MH, a 22-year-old para 1 was referred to the urogynaecology clinic with a history of six months of stress urinary incontinence and a symptomatic vaginal lump increasing with Valsalva. She also reported six months of postcoital and intermenstrual bleeding.

She was a current smoker and had a BMI of 43, but was otherwise fit and well with one previous termination of pregnancy in 2011 and had a Mirena in for the last four years. Her first Pap test was nine months ago and was normal. She had a previous forceps delivery.

On speculum examination, there was appearance of one large, fleshy, dark-red endocervical ‘polyp’ that bled with contact. Bimanual examination revealed a small anteverted uterus with a broad-based polypoid soft mass extending out of the cervix. There was a significant amount of contact bleeding, which stopped with pressure. No adnexal masses or pelvic sidewall swelling was palpable. A biopsy was taken from the polyp as it looked too big to be removed in clinic and slightly unusual. Miss MH was waitlisted for a hysteroscopy, dilatation, curettage and polypectomy to be done in theatre.

Histology surprisingly reported embryonal rhabdomyosarcoma (RMS). Ms MH was referred to the gynaecology-oncology multidisciplinary team meeting. MRI pelvis revealed a 6cm-large heterogeneous multicystic mass in the vagina and cervix with invasion of the left paravaginal region and extension to the left pelvic sidewall with no lymphadenopathy. Miss MH underwent laparotomy, modified radical hysterectomy, bilateral salpingectomy and transposition of the right ovary. Histology confirmed Stage 1 cervical embryonal RMS, botyroid type limited to polyp with complete excision. She has currently completed round two of chemotherapy (vincristine, actinomycin, cyclophosphamide [VAC]) with curative intent. The number of cycles is still to be confirmed by the medical oncology team. 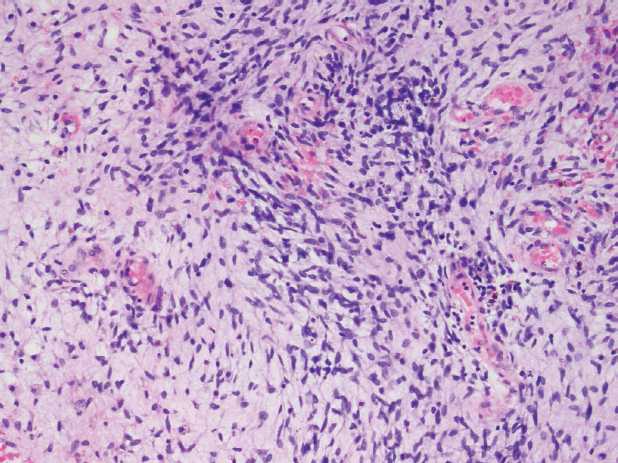 RMS is the most common soft tissue tumour of childhood and represents about half of all soft tissue sarcomas in childhood and three to four per cent of all cancers.1 However, it is extremely rare in adulthood, accounting for less than five per cent of all soft tissue sarcomas and less than one per cent of all cancers. About 20 per cent of embryonal rhabdomyosarcomas in children arise in the genitourinary tract and, of these, only 0.5 per cent of primary RMS is found on the cervix. Primary cervical RMS in adults is even rarer.2 According to the International Classification of Rhabdomyosarcoma3, there are four major histological subtypes: embryonal, associated with more favourable prognosis; botyroid, associated with intermediate prognosis; alveolar, with relatively poorer prognosis; and anaplastic RMS.

Establishing the diagnosis can be challenging both histologically and clinically, which can result in delayed diagnosis and a missed opportunity for early intervention. Currently there is no standard agreed treatment for adult patients with cervical RMS; although most patients are treated with a combination of surgery and chemotherapy, and treatment is largely based on studies in children and adolescents.4 Literature review revealed only a handful of case reports regarding embryonal RMS in adults and two case series, each comprising respectively only 11 and 25 patients over a period of more than 30 years.5 There has only been one case report of cervical embryonal RMS in Australasia, which occurred in pregnancy.6 The vast majority of treatment in cases of cervical RMS in adults has involved surgery, either cone biopsy or radical or total hysterectomy, followed by adjuvant chemotherapy. Patients with favourable prognostic factors, such as localised disease, single polyp and embryonal histologic subtype, and without deep invasion appeared to be treated successfully with minimally invasive surgery.

Unfortunately, overall data shows that adults diagnosed with any type of RMS had a significantly worse overall five-year survival compared to children (27 per cent versus 61 per cent), especially evident for localised disease (47 per cent versus 82 per cent).7 Tumours in adults were more likely to be at unfavourable sites or less favourable histology. These results may reflect inadequacy of primary treatment in adults and favour adults undergoing the same treatment principles as RMS in children. However, data are lacking with regards to specifics, for example, optimal radiation dose or the best way to integrate surgery, chemotherapy and radiotherapy. 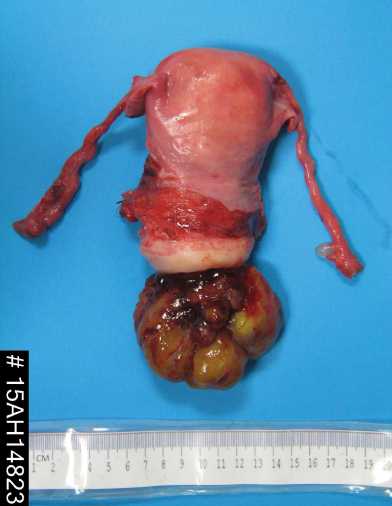 Ms MH presents a rare and interesting diagnosis, which was delayed by several months owing to the patient’s clinical presentation to her GP and her reason for referral to clinic. Fortunately, she had early stage disease that was able to be completely surgically excised. Optimal treatment required multidisciplinary team input as well as review of current available literature regarding the condition, given the rarity of this condition at this site and in this age group. This highlights the importance of clinical skills, such as history and examination, in determining diagnosis as well as the importance of writing this case report to contribute to existing literature to determine optimal treatment of embryonal RMS in adults.

The author thanks Dr Kathryn Payne (ADHB) and Dr Irene Low (CMDHB) for the figures provided.