For the broader O&G Magazine readership, balanced answers to those curly-yet-common questions in obstetrics and gynaecology.

Heavy menstrual bleeding (HMB) is one of the most common gynaecological symptoms for which women seek medical care.1 2 One in 20 women suffer from HMB.3 4 Several endometrial techniques are available for treatment, provided that intracavity abnormalities are absent. Modern endometrial ablation devices are effective in the treatment of HMB with high patient satisfaction rates.5

What is the difference between different generations of endometrial ablation devices?

Endometrial ablation (EA) refers to a series of blind techniques originating in the 19th century, which used various sources to achieve thermal destruction of the endometrium. The late 20th century brought an important paradigm shift when a rod lens hysteroscope was used together with an energy source permitting EA under direct visualisation. However, the early hysteroscopic resectoscopic techniques required training owing to their complexity and more user-friendly techniques with reported improved safety are now available.6

How does NovaSure ablation work?

The NovaSure system comprises of a disposable ablation device, a radiofrequency generator (RF), a suction line desiccant and a carbon dioxide canister.7 The ablation device is a conformable, bipolar electrode array housed within a protective sheath and mounted on an expandable frame (Figure 1). It also contains an intrauterine measuring system that determines the uterine cavity width (cornua–cornua distance). When the ablation device is seated correctly within the cavity, the sheath is withdrawn into the endocervical canal to protect the endocervix from thermal injury.8 Using the uterine width and length, the RF controller calculates the appropriate power output to ensure complete ablation of the endometrium. During ablation, the tissue impedance is continuously monitored and the procedure terminates once a level of 50 ohms is achieved. Actual treatment may vary up to 120 seconds to accommodate different uterine dimensions and endometrial thickness. Carbon dioxide is delivered into the uterine cavity at a safe flow rate and pressure through the central lumen of the ablation device. When 50mmHg is achieved for four seconds, uterine integrity is confirmed. If this intrauterine pressure is not achieved due to a perforation or a leak through the cervix, the procedure cannot be performed.9 A vacuum pump in the RF controller brings the endometrial lining into contact with the electrode array and simultaneously removes byproducts of ablation from the uterine cavity. Compared to other ablation techniques, NovaSure procedure has the shortest treatment time, requires no uterine pretreatment and can be performed at any time during the menstrual cycle.10 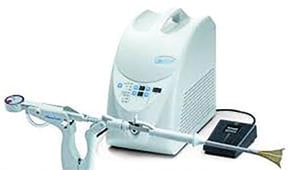 What are the success rates?

Satisfaction rates for NovaSure ablation are high, ranging from 77–96 per cent, amenorrhoea occurs in 14–70 per cent and quality of life (including pleasure and discomfort) scores from women with HMB are substantially improved.11 12 13 Treatment failure is defined as; hysterectomy for any benign indication, repeat ablation within 36 months of the procedure, synechiolysis or treatment with gonadotrophin-releasing hormone for post-ablation pain or bleeding.

What are the short- and long-term complications?

Endometrial ablation is not considered a form of contraception. Pregnancy has been reported to occur in 0.7 per cent of women who have undergone a tubal ligation.18 Pregnancy has been reported as early as five weeks and as late as 12 years postoperatively. The chances of pregnancy occurring after endometrial ablation and tubal ligation is estimated to be at 0.002 per cent or one in 50,000. Pregnancy has also been reported in amenorrhoeic women.19 There is no significant increase over the baseline miscarriage rate; however, the risk of ectopic pregnancy is approximately 2 per cent.20

When energy is applied to the endometrium, tissue necrosis and inflammation can result in uterine contracture and intrauterine scarring. This has been demonstrated with both resectoscopic endometrial ablation and the newer devices, such as NovaSure ablation.21 Persistent endometrium after endometrial ablation is common as evidenced by clinical, imaging, and histologic studies. Randomised clinical studies have shown that amenorrhoea rates are generally less than 50 per cent, suggesting persistent endometrial glands after endometrial ablation. Contracture and scarring at the fundus can lead to obstructed degrees of menses. This can manifest as haematometra within the body of the uterine cavity (central haematometra) or at the cornual region. In cases of post-ablation tubal sterilisation syndrome, symptom relief has been reported after removal of the tubes.22 Central haematometra is most likely to occur when the cervical canal is damaged at the time of endometrial ablation and has an incidence of 1–3 per cent.23 Central haematometra can usually be treated with cervical dilatation; however, in some cases, hysteroscopic adhesiolysis may be required.

What if she has symptoms?

Evaluating the uterine cavity and cancer risk after NovaSure ablation

The risk of endometrial cancer increases by approximately 2–3-fold between ages 50 and 70 years; it is possible that women who have undergone endometrial ablation in the last two decades are now entering the age group at risk for endometrial cancer.20 These patients should be evaluated with caution when abnormal uterine bleeding occurs and a diagnosis of endometrial cancer should be taken into consideration. Patients with bleeding after an endometrial ablation create a diagnostic dilemma because the basic tools for evaluation may fail to yield substantial results. In addition, the anatomical distortion can alter features at ultrasonography, making a noninvasive diagnosis challenging.26 However, a systematic review found that even though endometrial sampling and investigation of abnormal uterine bleeding may be difficult to perform, it remains feasible.27 In only two cases (11.8 per cent) a preoperative diagnosis of endometrial biopsy was not successful at presentation because of cervical stenosis and intrauterine adhesions.28 Therefore, in most cases, preoperative diagnosis of endometrial cancer or hyperplasia is possible. This is contrary to concerns that diagnosis may be delayed or difficult to achieve. If unable to perform pipelle because of cervical stenosis, hysteroscopy should be attempted given that evidence shows that it is feasible. Using a smaller hysteroscope, such as a 3mm scope, with vaginal estrogen for a few weeks prior to procedure (for postmenopausal patients with vaginal atrophy) and 400mμg buccal misoprostol 30 minutes pre-operatively has been found to be helpful at our endosurgery unit.

In the 13 years since the NovaSure procedure was approved by the FDA, significant data has been generated that provides a good safety profile, low re-intervention rates and high patient satisfaction rates.