‘Mucinous tumors of ovary are among the most difficult ovarian neoplasms for surgical pathologists to interpret.’ Hart WR.1

Mucinous tumours of the ovary comprise an estimated 10–15 per cent of all primary ovarian epithelial tumours. These tumours are characterised by mucinous differentiation of the lining epithelium, and encompass a spectrum from benign cystadenomas and cystadenofibromas to carcinomas. There is geographic variation in incidence, with mucinous tumours comparatively more common in Asian than in Western populations.2 Significant changes in classification and diagnostic criteria have occurred over the last 20 years. There remain controversies over aspects of classification and outcome.

The category of borderline tumour was introduced in 1971, to identify a subset of tumours with histological features intermediate between benign and malignant tumours. These tumours
display epithelial proliferation that exceeds that seen in their benign counterparts, but lack the destructive growth of invasive carcinomas. This subgroup is associated with a significantly better outcome than invasive carcinomas. Synonymous terms include mucinous tumour of low malignant potential, cystadenoma of borderline malignancy and atypical proliferative tumour. The term ‘borderline tumour’ has been adopted by the WHO.3 The majority (about 85–90 per cent) of mucinous borderline tumours (MBT) are lined by epithelium showing intestinal differentiation, usually in the form of goblet cells; however, there is often a spectrum of cell types present. The remainder are lined by epithelial cells resembling endocervical (Mullerian) epithelium. These two subgroups appear distinct, with differing epidemiological and clinical features.

MBT of intestinal-type occur predominantly in reproductive-age women with a mean of 45 years; however, the age range is wide (between nine and 88 years).1;2 They are almost always unilateral, with only five per cent occurring bilaterally. MBT are typically the largest of all ovarian tumours, and can measure up to 30cm in dimension (see Figure 1). Gross appearances cannot reliably distinguish benign, borderline and malignant tumours. Typically, the cut surface shows multiple cysts filled with mucin, often with a gelatinous appearance (see Figure 2). 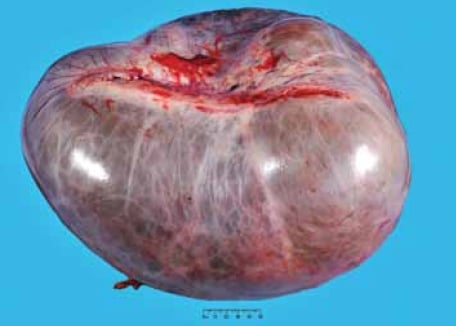 Mucinous tumours are presumed to develop sequentially from benign cystadenomas to borderline tumours and finally carcinomas, similar to an adenoma-carcinoma sequence seen in the bowel. Intermediary stages are borderline tumours with intraepithelial carcinoma (MBT with IC) and borderline tumours with microinvasion or microinvasive carcinoma (MBT with MI). Evidence for this hypothesis comes from morphological appearance and molecular studies. Borderline and malignant tumours are histologically heterogeneous, with a spectrum ranging from benign to proliferative and malignant, suggesting progression. K-ras mutations have been identified in mucinous tumours and are distinct from mutations seen in other types of ovarian tumours.6 K-Ras mutations have been identified more frequently in malignant, as opposed to borderline or benign, tumours. Identical mutations have been reported in benign, borderline and malignant areas of the same tumour.7,8 This mutation is a presumed early event in tumorigenesis. 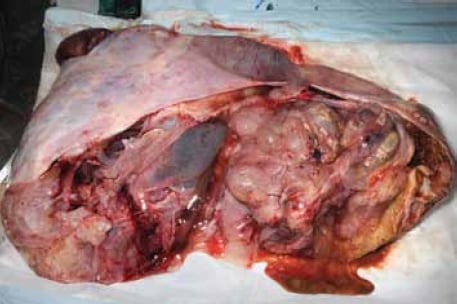 MBTs are typically composed of multiple cysts lined by epithelium that ranges from benign to proliferative with stratification, areas of tufting and papillary growth (see Figures 5 and 6). Cells show mild to moderate atypia and mitotic activity. The lower and upper ends of the spectrum are not well defined. At the lower end, benign and borderline tumours are distinguished by the degree of epithelial proliferation or atypia. ‘Minor’ foci of proliferation are acceptable in a benign tumour, with proliferation exceeding ten per cent used by many, but not all, as an arbitrary quantitative cut off.9 Tumours with proliferation below the ten per cent threshold are designated mucinous cystadenomas with focal proliferation or focal atypia. The significance of lesser degrees of proliferation is uncertain with few studies addressing this question.10

MBT at the top end of the spectrum may show either intraepithelial carcinoma or small foci of invasion (microinvasion or microinvasive carcinoma).

Microinvasion is reported in up to nine per cent of mucinous borderline tumours of intestinal-type.1 Invasive foci may consist of single cells, small clusters, glands or foci of confluent or cribriform growth within the stroma (see Figure 6). The generally acceptable maximum permissible size of each focus is 10mm2 in area, or 3mm in maximum dimension. Some investigators have used different maximum dimensions (2mm and 5mm).11,12 If invasion exceeds this, the tumour is classified as a carcinoma. The maximum size of individual foci has not been validated, nor has the number of permissible individual foci been specified.10 Foci of microinvasion should be distinguished from stromal mucin extravascation following cyst rupture. Fragmented, non-invasive epithelium may be associated with these mucin granulomata.

Figure 3. Mucinous tumours may arise in association with teratomas. This cyst is lined in part by mucinous epithelium (left), and by keratinizing stratified squamous epithelium (right). 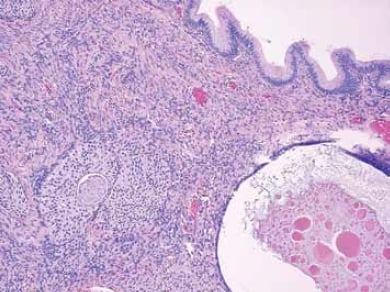 Figure 4. Mucinous tumours may co-exist with Brenner tumours. Nests of transitional-type cells typical of a Brenner tumour are seen in the ovarian stroma beneath a cyst lined by simple mucinous epithelium. 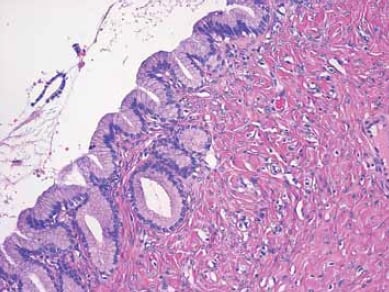 Figure 5. This cyst is lined by benign epithelium consisting of a single layer of cells showing mucinous differentiation. 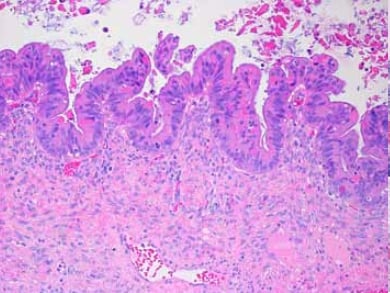 Borderline tumours of all types generally have an extremely good prognosis. Analysis of more recent studies with detailed histopathological review showed an overall risk of recurrence of two per cent (1.2 per cent, 1.9 per cent and 5.1 per cent in MBT without adverse histological features, MBT with IC, and MBT with MI, respectively).13 Recurrence is strongly associated with stage, and no women with stage IA tumours recurred, even where adverse histological features were present. Women who recurred all had stage IC tumours, with recurrence rates of 4.2 per cent, 16.7 per cent, and 25 per cent, respectively, in the three tumour subgroups. While overall numbers are small, tumour-related deaths were observed. An age-related risk was also identified, with all recurrences occurring in women aged <45 years.13 This age-related risk has not been widely studied.

Correct classification of mucinous tumours requires thorough sampling and exclusion of metastases. Tumours are typically large and histologically heterogeneous, necessitating extensive sampling. Current recommendations are that at last one section per centimetre of tumour be processed, with additional sampling reaching two sections per centimetre in tumours measuring over 10cm, or with complex cystic or solid areas, or those that show intraepithelial carcinoma, microinvasion or tumour perforation.14 This level of sampling was not reached in many earlier studies of outcome where aggressive behaviour in MBT was reported.

The vast majority of mucinous carcinomas, and some tumours with a borderline appearance, are now recognised as metastatic from extra-genital sites, particularly gastrointestinal tract. Tumours arising in the pancreas and biliary tract may be especially bland and histologically indistinguishable from mucinous borderline tumours. Presentation with an ovarian mass may precede diagnosis of the primary tumour. With the rare exception of teratoma-associated mucinous tumours, pseudomyxoma peritonei (mucinous ascites and/or mucinous peritoneal nodules) is invariably due to an extra-ovarian neoplasm, usually appendiceal, with secondary involvement of the ovary.4 When metastatic tumours are excluded, primary mucinous carcinomas are very uncommon. Immunohistochemistry may assist in interpretation of likely site of tumour origin, however there is considerable overlap in immunoprofile and clinical correlation is always required. Features favouring metastasis include bilaterality, size <10cm, surface involvement by tumour or the presence of surface mucin, an infiltrative pattern of invasion, nodular growth pattern, signet ring cells or single cell invasion, vascular invasion, ovarian hilar involvement, pseudomyxoma ovarii and pseudomyxoma peritonei. Dirty necrosis is often associated with metastatic colonic tumours. Knowledge of the patient’s clinical history and radiological findings are essential in assessment.

Our understanding of the pathogenesis and behaviour of mucinous tumours of the ovary has evolved significantly over the last few decades. The excellent prognosis of most MBT has resulted in suggestions that MBT be reclassified as benign. Others believe this term should be retained because it better reflects their intermediate position in tumorigenesis.15 Further, a number of persistent controversies remain unresolved, particularly those involving the clinical significance of histologically adverse features. Current outcome data are based on small patient numbers. Stratifying borderline tumours into those with and without adverse histological features allows for further studies of outcome in these subgroups. This will enhance our understanding of these problematic tumours and help guide clinical follow-up and long-term recommendations.