One hundred years ago, the Spanish Flu spread throughout the world. Commonly referred to as the black flu due to the bodies becoming so cyanosed, they would turn black upon death. It resulted in the deaths of nearly 60 million people, three times that of World War I.2

In the October of 1919, Marlartic reported in the Lancet on the maternity experience in Paris. Influenza in pregnant married women had resulted in a 46 per cent maternal mortality. In the 73 per cent of women that had pulmonary complications, 17 per cent resulted in premature delivery, with a perinatal mortality rate of 50 per cent. Simply summarised, ‘Woe unto them that are with child’.3

This was the first recognition that influenza complicated by pregnancy carried extra risk for mother and child. 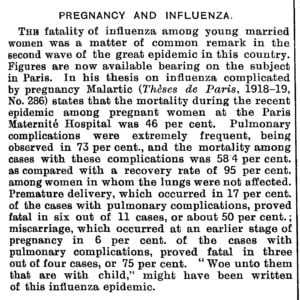 Not so long ago

Ten years ago, in 2009, the H1N1 influenza spread throughout the world, requiring the World Health Organization to announce a maximum, level 6, Global Pandemic Alert.4

Data collected during this period furthered the knowledge that pregnant women were at increased risk of complications from influenza.

Pregnant women were three times more likely to be hospitalised than the general population and they accounted for 5 per cent of deaths, despite only representing 1 per cent of the population.5 Maternal mortality was estimated at 6.9 deaths per 100 000 maternities in New Zealand and Australia during this time.6

Babies of the mothers who were severely affected had an increased risk of fetal growth restriction, spontaneous abortion, preterm delivery and subsequent perinatal mortality.7

Prior to 2009, serious concern for pregnant women with influenza, was only considered if they also had another risk factor such as asthma, smoking, obesity or diabetes. After 2009, it was now recognised that pregnancy alone is a significant risk factor and prompt treatment should be initiated for all.8

New Zealand and Australia continue to see high numbers of pregnant women admitted to ICU with seasonal influenza during the months of May to October each year.

The reason influenza is more severe in pregnancy is likely due to a combination of the immunological shift from a cell-mediated response to an antibody-mediated one and physiological cardiorespiratory changes (such as reduced functional residual capacity), which worsens throughout pregnancy.11

Given the length of the influenza season and that there is risk at all stages of pregnancy, these messages are relevant to every pregnancy.

Safety and effectiveness of vaccination

Most convincing may be the fact that maternal vaccination allows transplacental transfer of IgG, giving the newborn immunological protection for the first six months of life, at a time when they are too young to be immunised.

‘Not only for themselves, but also for their unborn child’. M Knight.13

Unfortunately, vaccination rates in Australia and New Zealand continue to be poor (Table 1).

Influenza vaccination is free to all pregnant women in New Zealand and Australia, but the usual barriers to healthcare still exist (lack of awareness, information, time, language barriers or lack of adequate counselling).

In 2016, Waitakere Hospital, NZ, a vaccinator was situated in antenatal clinic. This significantly increased immunisation rates demonstrating that pregnant women are excepting of vaccination if given the opportunity. Obstetric departments should campaign to their managers to provide funding for an opportunistic vaccinator to be in antenatal clinic during these months of the year, as prevention is truly the best option.

The cost-benefit has been estimated to prevent one to two hospitalisations per 1000 women vaccinated during the second or third trimester.14

Safety and benefit of the use of antiviral treatment

Hospitalised pregnant women who receive a neuraminidase inhibitor within the first two days of onset of symptoms had 84 per cent reduction in ICU admission and were one fifth as likely to die than women who were treated later or not at all.15

Hand hygiene and cough etiquette should be reiterated. Breastfeeding should be encouraged given the immunological benefits passed on from the mother in her milk.

Box 4. Antivirals for influenza in pregnancy.

Let us not be idle. We now live in a time where women are more frequently accessing medical advice from online social sources than from a health professional. We need to go to women with the health messages they need.