Advancement in endoscopic equipment has facilitated the treatment of intrauterine pathology in both the inpatient and outpatient setting.1 These instruments allow removal of lesions under direct vision, superseding traditional techniques such as blind removal with curettage and polyp forceps. Pathology such as endometrial polyps, sub-mucous fibroids, intrauterine adhesions and septa can all be resected in this way. Increasingly, hysteroscopy is reported in the investigation and management of women with complications related to retained products of conception. Direct visualisation and excision has safety advantages in these women who are at high risk of Asherman syndrome.2

Intrauterine lesions may cause symptoms such as menstrual abnormalities, subfertility or miscarriage. Excision in those who are symptomatic may result in clinical improvement and is recommended in some to allow histological diagnosis, for example, endometrial polyps in postmenopausal women.3 4 5

The American Association of Gynecologic Laparoscopists (AAGL) advocates the removal of endometrial polyps under direct vision as gold standard and advises against blind removal with polyp forceps where possible.6 Blind removal has been shown to have a high rate of incomplete resection (up to 59 per cent) and uterine perforation particularly where blind curettage is used.7 Likewise, successful adhesiolysis of intrauterine adhesions and septa under direct hysteroscopic vision can be performed with a needle, hysteroscopic scissors, electrosurgery or mechanical morcellators.8 Consequently, many consider blind curettage obsolete.9

These are all used with operative scopes, which generally have a larger outer diameter than diagnostic hysteroscopes.

In order to appreciate the advantages and disadvantages of the available hysteroscopic tools, it is worth first mentioning the distension media used.

Gas (carbon dioxide) distention can rarely be complicated by carbon dioxide embolism. Compared to fluid, it gives inadequate views in the presence of blood and, therefore, is largely limited to diagnostic hysteroscopy.10 Given the ‘see and treat’ approach of ambulatory gynaecology, this further calls into question its use in present-day practice.

There are two commonly used fluid media: normal saline and 1.5 per cent glycine. Normal saline is the most universally used media. Although systemic absorption in large amounts may cause fluid overload, it does not result in electrolyte imbalance because it is an isotonic electrolyte-rich solution. A large maximum deficit of 2500ml is deemed appropriate, making it suitable for longer operative procedures.11

In addition to the risk of pulmonary oedema from fluid overload, electrolytefree solutions (for example, 1.5 per cent glycine, three per cent sorbitol, five per cent mannitol) have the additional risk of hyponatraemia and the potentially fatal consequences of the resulting cerebral oedema.12 Interestingly, these consequences are more likely in premenopausal women. In part, this effect can be reduced with preoperative GnRH agonists, which affect the sodium potassium pump.13

Given the potential risk of fluid absorption, monitoring fluid deficit is imperative. For diagnostic and short procedures, manual calculation is acceptable. Longer procedures, such as hysteroscopic myomectomy, have a higher risk of fluid absorption and ideally an automated delivery system should be used.14 These systems are able to maintain a constant intrauterine pressure, measure fluid flowing in and out of the cavity and calculate the fluid deficit.15 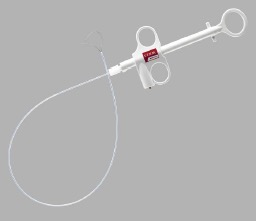 Hysteroscopic scissors and graspers are used down an operative hysteroscope and allow cold cut excision and removal of the lesion. These instruments are cheap and reusable, only requiring a five French operating channel to employ. Disadvantages include incomplete resection of polyp stalk (although recurrence rates are low at 0–4.5 per cent) and limitations related to polyp size.16

Polyp snares are generally used with operative hysteroscopes to resect polyps with or without electric current, cutting and coagulating or lassoing the polyp at the base. The polyps can be removed with the snare device, but often require polyp forceps for removal.

The Lin snare system (nickel-titanium alloy) is used with a specialised small diagnostic flexible hysteroscope. Although this technique avoids the use of electric current, analgesia or cervical dilatation, difficulty in retrieving the specimen for histological diagnosis is described.17 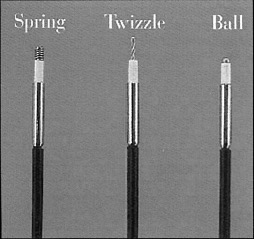 A resectoscope comprises a hysteroscope with an operative sheath down which specifically designed electrical loops are passed. Using a trigger handle, they resect tissue in a cutting fashion with either monopolar or bipolar electrosurgery. The strips of resected tissue are then removed from the cavity, usually with polyp forceps.

Mini resectoscopes, such as the PRINCESS™, have a small outer diameter of 7mm and have been demonstrated to be well tolerated and successful at removing endometrial polyps in the office setting.18 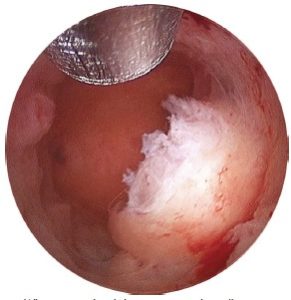 What is visualised during a procedure. (Image:
Holologic.)

Difficulties with resectoscopes can be encountered. The use of electrosurgery heats up the distention fluid producing bubbles, which can obscure the view. The build-up of resection chips requires the passage of polyp forceps into the cavity for removal. Consequently, multiple passes of the hysteroscope are required to complete the procedure, increasing the risk of uterine perforation. In addition, the use of electrosurgery comes with the risk of thermal injury to the endometrium and, rarely, the uterus or adjacent tissues. In women with subfertility, this is obviously of concern.

Electrical resection needles, such as Gynecare Versapoint system™ and BipoTrode™, use bipolar electricity. The current passes from the tip of the device back to its own outer sleeve, cutting tissue in contact with the tip which forms part of the return circuit. Generally, graspers or polyp forceps are required to retrieve the specimen, which can require cervical dilatation.

The hysteroscopic morcellator was introduced in 2005 and there are several devices available (BIGATTI Shaver®, MyoSure®, TRUCLEAR™).19 The morcellator is inserted through a specifically designed hysteroscope. It consists of two rigid tubes, an outer sheath with an operative window and an inner blade. The inner blade oscillates when activated by a foot pedal cutting and aspirating the pathology simultaneously. The tissue is collected via the fluid delivery system, which filters the specimen into a bag. Maintaining tissue contact with the intrauterine pathology keeps procedure time to a minimum.20 The specialised hysteroscopes operate with fluid management systems (discussed earlier) and, because the blade is mechanical use, normal saline as the distension media.21

There is a lack of quality data on the efficacy of mechanical morcellators; however, recent studies show promising results. A small Australian study describes the successful use of hysteroscopic morcellators to manage endometrial polyps in the outpatient setting. The resections were done under local anaesthetic using the MyoSure device. A complete resection rate of 95.2 per cent was achieved with no complications. The procedures were quick (mean time 39 seconds) and had high patient satisfaction (92.5 per cent).22 In the UK, the National Institute for Health and Care Excellence (NICE) reviewed available efficacy outcomes for the morcellation of fibroids. Comparison to conventional resection showed equitable symptom relief at three months, reduced operating time (mean 11 versus 17 minutes) and no significant difference in fluid deficit.23 Safety review of the morcellator estimated an adverse event rate of less than 0.1 per cent the majority of which were minor. Although complications occur these rates are lower than with conventional electrosurgical resection.24 25

Given current concerns regarding laparoscopic morcellation, it is worth noting that the FDA categorises hysteroscopic morcellation separately with a different risk profile.26 The implementation of any new technology into clinical practice should be done within the process of clinical governance.27

Morcellation with MyoSure is being performed throughout New Zealand (within 12 of 20 district health boards) and Australia (more than 50 hospital accounts). As yet, few centres are offering this in the outpatient setting despite evidence of patient acceptability. 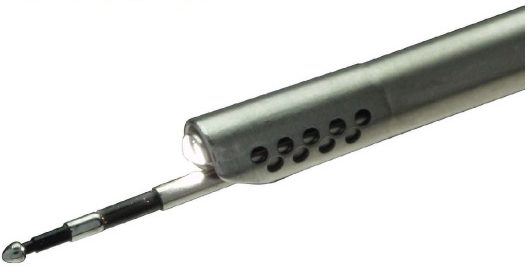 A randomised controlled trial (RCT) has compared mechanical morcellation with the electrical resection needle (Gynecare Versapoint™).28 When performed by an experienced operator in the outpatient setting, polyp removal with the morcellator took less time (five minutes 28 seconds versus ten minutes 12 seconds), was more likely to achieve complete polyp removal (98 per cent versus 83 per cent) and was less painful than electrical resection.29 These findings were despite the morcellator hysteroscopes having a larger outer diameter.

An RCT of trainees learning resection with a morcellator versus a resectoscope demonstrated a difference in mean operating time (10.6 minutes versus 17.0 minutes) and fewer scope insertions (one versus seven, respectively). Subjectively, trainees found the morcellator easier to use.30

To our knowledge, there are no trials that have compared the efficiency and efficacy of different morcellators. However, a study comparing the cutting time of fibroid tissue using the TRUCLEAR and MyoSure systems demonstrated a shorter cutting time with MyoSure system.31

When introducing new techniques, the learning curve must be considered and compared to that of the traditional techniques they are replacing. In the previously mentioned RCT, trainees were more likely to complete morcellation independently. As a result, the authors concluded that the morcellator was a safe and effective alternative to the traditional resectoscope in inexperienced hands.32 These newer devices allow skills in new procedures to be acquired in a safe and effective manner, despite the reduction in surgical caseload.

What is the appropriate setting for learning these techniques? The authors believe that competency in diagnostic hysteroscopy be obtained before advancing to operative procedures. How many procedures are required to gain competency? In the above RCT, trainees had performed fewer than 20 procedures entering the trial (most fewer than ten) yet 97 per cent independently performed resection with the morcellator.33

With the widespread adoption of newer methods, the question remains whether conventional resection techniques will become obsolete. In some units, this is already becoming the case for endometrial resection, which has been replaced with new-generation ablation devices.

We have been unable to find evidence evaluating the cost effectiveness of the different resection techniques. All can be effectively performed in an ambulatory clinic setting with or without local anaesthetic. The cost of the equipment varies according to the operative scope and devices used (reusable or disposable). The cost of disposables can be prohibitive for some centres and, arguably, entirely reusable equipment is more cost effective and available.

For the small polyp and other minor intrauterine pathology, the authors advocate simple scissor and grasper techniques. For larger polyps, particularly those with a broad base, and for small fibroids, the ability to remove these in the outpatient setting we believe justifies the cost of disposable equipment, in comparison to that of an inpatient procedure.

There are various devices now available for safe removal of pathology under direct hysteroscopic vision. Equipment should be chosen according to the type of lesion and operator skill, considering both patient acceptability and cost. Training should aim to encompass both the simple and more advanced techniques, which with new devices should be well within the remit of a generalist gynaecologist. This will optimise the opportunity for patients to benefit from a ‘see and treat’ approach, ideally within the outpatient setting.