The Hyperglycaemia and Adverse Pregnancy Outcomes (HAPO) results were published in 2008. Since then, much debate has ensued internationally regarding the best approach to screen and diagnose hyperglycaemia in pregnancy. Here, we discuss the rationale behind the earlier Australian diagnostic criteria for gestational diabetes (GDM) and highlight the main differences between the 2010 recommendations of the International Association of Diabetes in Pregnancy Study Groups (IADPSG) and the 2014 guidelines of the Australasian Diabetes in Pregnancy Society (ADIPS) for screening and diagnosis of hyperglycaemia in pregnancy.

Historically, the diagnostic criteria for GDM were based on glucose levels on an oral glucose tolerance test (OGTT) that were associated with an increased risk for diabetes in the mother.1 The aim of the HAPO study was to assess glucose levels on an OGTT that were associated with adverse neonatal outcomes.2 In Australia, consensus criteria for the diagnosis of GDM, established in 1991, were designed to standardise the diagnostic approach to GDM, while awaiting further data and international consensus. At the time, individual Australian institutions differed in their assessment of clinical risk factors, glucose loads, test duration and diagnostic thresholds. Using Australian consensus criteria, only one blood glucose level (BGL) needed to be elevated for the diagnosis of GDM, whereas most international guidelines required at least two elevated BGLs to make the diagnosis.

The HAPO study demonstrated a continuous and linear relationship between maternal fasting, one-hour and two-hour BGLs on an OGTT, and increasing frequency of adverse maternal and neonatal outcomes.3 Importantly, there were no obvious glucose thresholds at which the risks of adverse pregnancy outcomes increased. The results of the HAPO study formed the basis for the 2010 IADPSG consensus guidelines, which were endorsed by a number of international bodies, including the World Health Organization (WHO)4 and, in Australia, ADIPS5 and RANZCOG. IADPSG recommended universal testing for hyperglycaemia in pregnancy with a 75g, two-hour OGTT at 24–28 weeks gestation. The 2014 ADIPS diagnostic criteria for hyperglycaemia in pregnancy are summarised in Table 1. 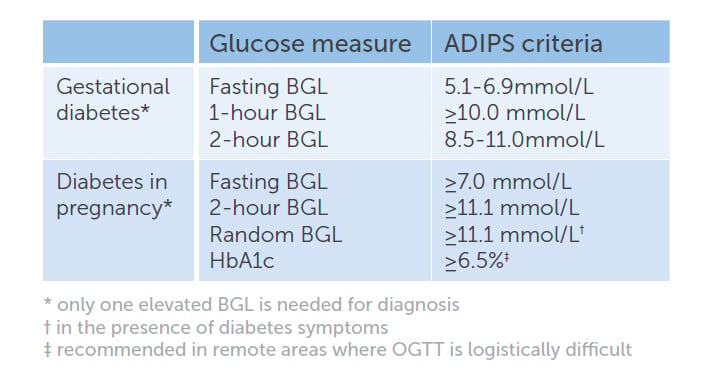 Table 1. ADIPS criteria for the diagnosis of hyperglycaemia first detected in pregnancy.

The majority of the 2014 ADIPS guidelines are consistent with the IADPSG recommendations. ADIPS differs from IADPSG in some of the terminology, as well as in the recommendations for early testing. Women with BGLs in the range for diabetes outside pregnancy are referred to as having ‘diabetes in pregnancy’ (DIP) by ADIPS and WHO, but as having ‘overt diabetes in pregnancy’ by IADPSG. It should be emphasised that DIP is an antepartum diagnosis and is not synonymous with type 2 diabetes. A review of local Australian data revealed that when women with ‘overt diabetes in pregnancy’ attended a follow-up OGTT at 6–8 weeks postpartum, 21 per cent had diabetes; 38 per cent had impaired fasting glucose (IFG) or impaired glucose tolerance (IGT); and 41 per cent had returned to normal glucose tolerance.6 The ongoing presence of diabetes must, therefore, be confirmed postpartum.

ADIPS also differs from IADSPG with regards to early testing in pregnancy. ADIPS recommends that women with risk factors for hyperglycaemia in pregnancy should be tested early in pregnancy (Table 2). ADIPS recommends that the method of early testing in pregnancy should be based on clinical judgment, local healthcare policy and possible risk stratification, but should ideally be an OGTT. IADPSG recommends early testing only in populations with a high prevalence of type 2 diabetes. ADIPS and IADPSG also differ in the diagnostic criteria for early pregnancy. The primary aim for early testing is to exclude previously undiagnosed diabetes, in which case, both groups agree that women with BGLs in the DIP range in early pregnancy should receive prompt treatment for hyperglycaemia. However, what is not clear is whether the 24–28 week diagnostic criteria for GDM are applicable in early pregnancy. This is flagged as an area requiring further research by ADIPS. On the contrary, IADPSG recommend that women with a fasting BGL ≥5.1mmol/L in early pregnancy should be classified as having GDM. This is perhaps one of the most controversial aspects of the IADPSG recommendations. Glucose levels fall during and after the first trimester, so using 24–28 week diagnostic criteria for GDM in early pregnancy may overdiagnose GDM. Zhu et al demonstrated that, of women with a fasting BGL 5.1–5.6mmol/l at their initial antenatal visit and no subsequent treatment, only 37 per cent had GDM at 24–28 weeks gestation.7 Whether or not the treatment of early GDM, diagnosed by the 24–28 week criteria, is beneficial should be answered by the Australian-led, multicentre randomised controlled trial, Treatment of Booking Gestational Diabetes Mellitus (TOBOGM) study. In the meantime, clinical judgment is required. 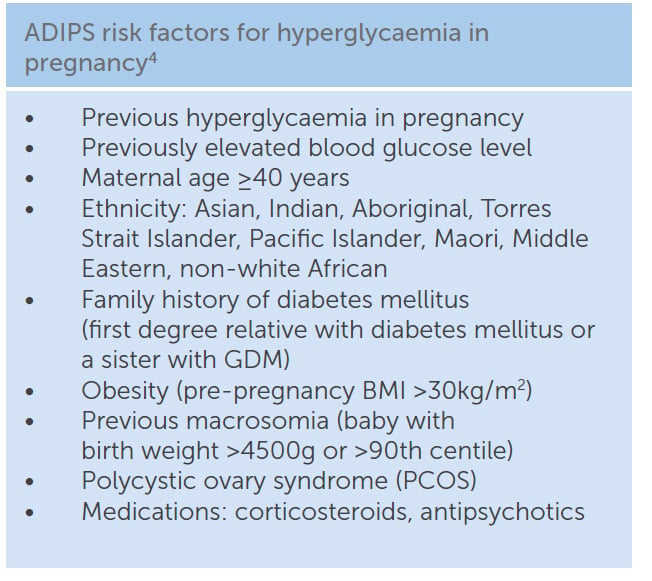 In Australia, it is the BGL criteria that have caused debate. However, the greatest impact on the number of women diagnosed with GDM locally has been from the application of the 75g, two-hour OGTT in all pregnant women, instead of using the 50g, one-hour glucose challenge test (GCT) on a select group of women, which missed up to 25 per cent of GDM cases.8