The interaction of cost, culture and tradition with modern medicine makes the decision where to give birth less than straightforward.

It seems difficult to understand why, in a country with a maternal mortality ratio of well over 400 per 100 000 live births, women would choose a homebirth: often hours from any facility offering medical care should problems occur in the course of labour, delivery or the puerperium. Yet at least 80 per cent of Lao women do so and only about 20 per cent have their birth attended by what are loosely termed ‘skilled health personnel’. Lao women are not stupid and few of them would not know of at least one relative or acquaintance that has either died or nearly died in relation to pregnancy and childbirth. Recent research that I was asked to review and put into a form suitable for publication sheds light on some of the issues.

Reasons for choosing a homebirth

While seldom mentioned as the main reason for choosing a homebirth, cost is a major issue. All hospital services in Laos attract a charge. Healthcare spending is estimated to be about US$11.50 per person per year, of which about 60 per cent is paid by the consumers, 30 per cent by external donors such as non-governmental organisations (NGOs) and ten per cent by the government. Between 50 per cent and 80 per cent of the budgets of major hospitals are provided by user fees and the sale of pharmaceuticals. The fees are, relative to the income of families, substantial. About 80 per cent of the Lao population survives on less than US$2 per day: to put this in perspective, petrol costs about US$1 a litre. Very few families have any significant savings and most, especially among the 75 per cent or more of the population who live in rural or remote areas, live a hand-to-mouth existence: cash expenditures impact immediately on daily living. Not only are all hospital services charged for, but there are also other significant costs, such as transport to and from hospitals for the woman and her support people, the cost of food for her and the support people who must stay in the hospitals to provide care for the woman during hospitalisation and accommodation for those who cannot fit into the hospital rooms. In rural communities, every person is a producer of income in one way or another and their absence from home diminishes the family income substantially, adding greatly to the expense of healthcare.

A very common reason given for choosing homebirth is the need, felt by all Lao, to be surrounded by family and friends at the times of major life events. This is difficult for most women from rural areas, should they choose birth in a healthcare facility, given the distances involved and the very poor state of the roads, together with very poor public transport. For Lao people, with their very strong sense of community, this is a serious consideration. Moreover, if death were to ensue, to die away from home and without family and friends around would be a major source of distress for all concerned, and carry numerous problems related to the disruption of the stable spirit life that Lao spend a great deal of time and energy to develop in the home and among the family members. In a similar vein is the inability of women in hospital to follow traditional practices they feel have benefitted endless generations of their family during and after birth. Some of these include the use of ‘magic water’ or ‘nam mon’ to wash or anoint the woman with during labour, the placing of eggs on the abdomen to facilitate contractions and a copious intake of coconut milk. Traditional birth attendants, with little or no training, help the family care for women in labour at home. Their approach is a mixture of superstition and wishful thinking, as evidenced by one, aged 57, who commented that in cases of difficult delivery he: blew sacred water over the patient to improve contractions, then placed soap in the vagina to facilitate delivery and if this failed sent the woman to a healthcare facility. Access
to known support people during labour and delivery is limited during a hospital birth for both practical and institutional reasons. Practices such as squatting while holding a rope or walking around are more difficult. The traditional drinks, salves and incantations are not valued by many of the ‘skilled’ birth attendants, who have been trained in ‘modern’ birth techniques. Birth with the woman on a high delivery bed, on her back, with her legs spread and sometimes strapped in stirrups to afford good access for the accoucher is uncomfortable and embarrassing. The virtual universal use of episiotomy, often with little or no analgesia, and its repair by relatively inexperienced staff, is considered inappropriate. After a hospital delivery, women have the choice of single rooms with en suite for quite a significant cost or beds in a communal room lacking toilet facilities and with no privacy with up to seven others (and their families) which are also paid for. As hospitals become more crowded, it is common for reception areas and corridors to become makeshift wards, with no privacy at all.

Caesarean section is far less common in Laos than in the West, but it is a major issue that women associate with institutional delivery. The teaching hospital in which my office is situated has a caesarean rate of around ten per cent, but it is rising, and it is over 20 per cent in one other hospital. In the cities there is an increasing minority of ‘educated’ women who demand caesareans without labour, either to preserve the integrity of their lower genital tract, in the belief that the procedure is safer for the baby or to avoid the possibility of a long and painful labour. For rural women, however, caesareans mean more cost, a longer period of recuperation (and associated loss of productivity) and a much higher chance of a further caesarean. Caesarean deliveries are an attractive proposition for doctors, taking away the stress of overseeing a labour and reducing the risk of some sudden and dramatic event requiring immediate intervention. One doctor explained how she had overseen the delivery of an unexpected stillborn infant and ‘would not run that risk again’. It is traditional for Lao families to present money ‘for a meal’ to doctors who perform surgery: the amounts vary, but can be substantial, especially if the doctor is believed to have saved a possible obstetric disaster by a ‘timely’ abdominal delivery. There is some evidence that in neighbouring Thailand this practice is related to an increasing caesarean rate. 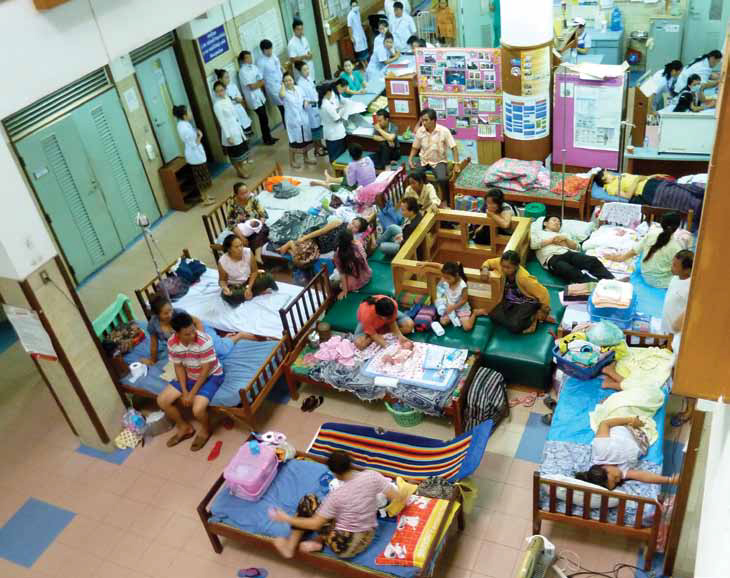 Not a great place to have a baby: antenatal, postnatal and gynaecological patients accommodated in the ward reception area at a central hospital in Laos.

It is traditional that women have a hot bath as soon as possible after delivery and further hot baths and saunas with herbs during the puerperium, but no hospitals are equipped for this. Furthermore, most Lao women believe it is important to ‘rest over fire’ for up to 30 days postpartum to dry up the lochia, restore the pelvic muscles and tissues and regain their physical and emotional strength.

This requires a bed with a grate underneath, where a small fire is maintained. Family and friends visit, and the woman is given a special diet to ensure recovery. This practice is obviously not possible in a heathcare facility. Burying the placenta is also a critical ritual for Lao of most ethnic backgrounds. The burial must occur at the family home as soon after delivery as possible so the spirit of the child will remain intact and return home. This is much more difficult following a hospital birth far from the family home.

A little harder to understand is the attitude that borders on denial: ‘my mother and grandmothers, my husband’s mother and grandmothers all delivered at home and had no problems, so why should I go to a hospital?’ Perhaps, barely stated, is the thought: ‘if I have a problem, maybe it is my fault anyway, for not being as strong as the other women in my family.’ The principal decision-makers in most Lao families, especially in rural areas, are the mothers and grandmothers of both the wife and the husband. They control all aspects of family life and have experience, perceived knowledge and a natural right to be respected because of their seniority in the hierarchical Lao social system. Their decisions are based, not so much on the individual circumstances of one person, but the perceived benefits to the entire extended family.

One approach to bridging the gap between traditional birthing practices and modern medical approaches has been the introduction, in some of the more remote southern provinces, of ‘maternity waiting homes’ called in the Lao setting ‘silk homes’. These are places where women and family members can live in the later weeks of pregnancy, close to modern facilities but with the ability to follow more traditional birthing practices in the absence of complications. The project was initially funded by a grant of ¤2 million from the EU. While there are reports of initial success of the project, a significant number of problems have been identified that have compromised its full implementation. It is far from certain that these can be overcome.

The government is planning to introduce free maternity care and confinement in healthcare facilities in the near future, although it is not yet clear where the money to fund this will come from. However, it is obvious that until many of the social and cultural issues are addressed, homebirth is likely to be favoured by a large proportion of the population into the foreseeable future, despite the manifold dangers. And, for those in the West, perhaps some reflection on the Lao situation will shed light on the reasons many women in the developed world express dissatisfaction with the processes of maternity care, if not the outcome.