Malignancies of the female genital tract in children and adolescents are rare, with consequent potential delays in diagnosis and treatment.1 Care of children and adolescents with gynaecological malignancies is challenging and should involve a multidisciplinary approach including paediatricians, gynaecologic oncologists and/or paediatric surgeons, and other oncologists as needed. Treatment must always aim to preserve reproductive capacity.

Germ cell ovarian tumours tend to grow rapidly, with the most common presentation being abdominal pain and a palpable abdominopelvic mass.5 Approximately 10 per cent of patients present acutely with cyst rupture, haemorrhage or torsion.6 Initial work up should include transabdominal ultrasound scan (USS) and tumour markers. USS typically shows a large ovarian mass that is predominately solid.7 Tumour markers that may be elevated in germ cell tumours include AFP, LDH and bHCG (Table 1). CA-125 (a nonspecific marker for non-mucinous epithelial adenocarcinomas) may be elevated simply due to inflammation or irritation of the peritoneal lining, secondary to the tumour mass. Mixed germ cell tumours (more common with germ cell tumours other than dysgerminoma) may have several elevated tumour markers, depending on their composition. Pure immature teratomas often do not have elevated tumour markers at all, reflecting the immature development of their composite cells. If a dysgerminoma is diagnosed in a prepubertal girl, the work-up should include a karyotype, as dysgerminomas are associated with gonadal dysgenesis and androgen insensitivity syndrome.

The primary treatment of ovarian germ cell tumours is surgery, both to confirm the diagnosis and for definitive treatment. Fertility preservation is almost always possible, due to the exquisite sensitivity of these tumours to chemotherapy. Surgery should include unilateral salpingo-oophorectomy (USO), washings, omental biopsy and careful inspection of the contralateral ovary and all peritoneal surfaces, with debulking of any obvious disease. Alternatively, cystectomy, without spillage, can be performed first if the diagnosis is uncertain, with a plan for intra-operative frozen section. The one exception to USO is with dysgerminoma and a karyotype showing 46XY. In this situation, both ovaries should be removed due to the risk of developing malignancy in the remaining ovary.

In the case of an unexpected finding at laparoscopy, the paramount responsibility of the surgeon is to first do no harm. In this case, an intra-operative phone call to your local gynaecological oncologist for advice is probably the best option to prevent inappropriate surgery (either too much or too little).

Germ cell ovarian malignancies are highly chemosensitive tumours. Three to four cycles of BEP (bleomycin, etoposide, cisplatin) chemotherapy is usually recommended as adjuvant treatment following surgery. The exception is for stage 1A dysgerminomas or stage 1A low-grade immature teratomas, which can usually be managed with clinical follow up alone.8

Ten per cent of ovarian neoplasms in childhood and adolescents are sex cord stromal tumours,9 with juvenile type granulosa cell tumours of the ovary being the most common. A retrospective review found 44 per cent of cases were diagnosed prior to the age of 10 years old.10 Seventy-five per cent of prepubertal girls with juvenile type granulosa cell tumours present with features of precocious puberty, as these are oestrogen-secreting tumours.11 However, the most consistent finding at diagnosis is a history of increased abdominal girth and palpation of an abdominopelvic mass.12 Sertoli-Leydig cell tumours are the next most common sex cord stromal tumours found in children and adolescents. Due to androgen secretion of these tumours, up to 85 per cent will present with virilisation. This may include acne, hirsutism, deepening voice or clitoromegaly.13 Pre-operative imaging usually reveals a mixed solid and cystic ovarian mass.

The tumour marker inhibin B is commonly elevated with granulosa cell tumours; however, the cost (it is not an insured item on the Australian Medicare Benefits Scheme) and delay in obtaining this result makes it impractical for diagnostic purposes. Fortunately, most sex cord stromal tumours are stage 1 at diagnosis, which makes them curable with surgery alone. Surgery, as with germ cell tumours, should be fertility preserving and include USO, washings, omental biopsy and careful inspection of the contralateral ovary and all peritoneal surfaces.

Rhabdomyosarcomas are the most common malignant soft tissue tumours in children and adolescents.14 Rhabdomyosarcomas of the female genital tract can occur in the vagina, vulva, cervix or uterus. The most common histological subtype affecting the female genital tract is sarcoma botryoides; named due to the grape-like appearance of the tumour.15 The vagina is the most frequent site affected, with the median age of diagnosis being 2–3 years old.16 17 The presentation is usually of a polypoid mass extruding from the vagina, or vaginal bleeding/blood-stained vaginal discharge.18 Biopsy is required for histological diagnosis.

Treatment of localised rhabdomyosarcomas of the female genital tract has changed drastically over the past 40 years. Previously, radical surgery including pelvic exenteration was advised. Nowadays, organ-preserving treatment is the norm, due to the use of multiagent chemotherapy with good response rates. Surgical excision is reserved for persistent tumour after treatment.19 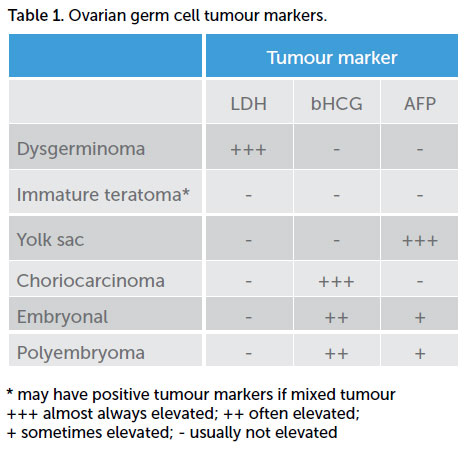 The use of adjuvant radiotherapy has also declined, given that young children are particularly susceptible to the long-term complications of radiotherapy.20 Radiotherapy is usually only given to patients with residual disease after surgery and brachytherapy is preferred over external beam pelvic radiation.21 These conservative treatment options for localised disease have a high chance of cure.22

Diethylstilbestrol (DES), a nonsteroidal oestrogen, was used during pregnancy to prevent miscarriage and preterm delivery from the 1940s until the 1970s.23 Girls who were exposed to DES in utero have a 40-fold increased risk of developing vaginal or cervical clear cell adenocarcinoma. The most common age at diagnosis is late teens or early 20s.24 Given that DES use during pregnancy ceased worldwide in the early 1980s, vaginal or cervical clear cell adenocarcinomas should fortunately no longer be seen in adolescent girls.

Follow up of children and adolescents after a gynaecological malignancy should be for a minimum of five years, and should include a gynaecologic oncologist who, along with other specialists, can offer advice regarding contraception, fertility and the long-term sequelae of cancer treatment.

A diagnosis of malignancy in childhood or adolescence can obviously have a devastating effect on the patient and her family. Psychological support and management of any sequelae of treatment may be needed for an extended period, for both child and parents. However, in general, most malignancies of the female genital tract in children and adolescents have a good prognosis, without loss of fertility, if managed appropriately.