An Obstetric Clinical Committee appointed by the Australian Department of Health has been given the task of reviewing the MBS obstetric item numbers and their associated descriptors. The objective is to support effective care while minimising unexplained variation. A priority is increased support of rural obstetrics, both for specialist and general practitioner obstetricians. Specifically, all practitioners have been told that there is not a specific savings target of the MBS review but rather a desire to place limited resources where they will best support effective care.

The following are items that the Obstetric Clinical Committee has suggested for amendment within the MBS schedule. It is important to appreciate that the committee has very limited scope with respect to remuneration and the focus should be on item descriptors that fit with contemporary best clinical practice. Any recommendation from the committee will go to the MBS Review Task Group and then to the Minister. Fellows and Diplomates will appreciate that any recommendations that both support effective care and reduce costs may be more likely to be accepted than those that are costed at increased expense to the health budget. The committee would welcome input from Fellows and Diplomates with respect to the suggestions below or other matters they believe should be addressed.

Item 16590 is intended to provide for the planning and management of pregnancy where the medical practitioner is intending to manage the labour and birth of a privately admitted patient and 16591 for those who are part of a shared-care arrangement. It appears that there are many billings under 16590 by practitioners who never manage labour and birth. Improved descriptors may reduce this anomaly. There is currently no recognition in the MBS items of availability and telephone consultations, which are so much a part of routine care of a private obstetric patient. Many urban obstetricians invoice for these services with substantial out-of-pocket – commonly using item 16590. MBS data reveals that our rural colleagues have substantially lower out-of-pocket billings, often leading to a significant disparity in net income from pregnancy management between urban and rural areas. Improved remuneration for rural obstetricians would be a positive outcome of the MBS review, but will be difficult to realise in the current fiscal climate. While the committee will argue for increased patient rebate for 16590 (currently $324), this will be unlikely to happen if the overall obstetric budget is costed to increase as a result.

Recognition of mental health disorders has rightly drawn increased emphasis in our training programs. All would be aware that suicide now features prominently among the causes of maternal deaths in both Australia and New Zealand. While not being prescriptive of any specific mental health assessment, it has been suggested that ensuring a mental health assessment has been performed by a practitioner (GP or obstetrician) during pregnancy form part of the 16590 item description.

Many of you will have experienced the frustration of finding that key first visit investigations have been omitted by the requesting practitioner while a number of other tests have been requested for which there is no apparent explanation. It is suggested that a single item, Grouped First Antenatal Visit Investigations, be developed, which would include all the tests identified by the College and National Guidelines as indicated at this time. Of course, other investigations could still be performed as indicated, but a single item will greatly simplify the task for most practitioners.

Complex Management of Labour and Birth

Analysis has revealed considerable variation between states in the balance between 16519 and 16522. While these differences may well have a valid clinical explanation, most would acknowledge that some of the descriptors that qualify for 16522 are somewhat open to interpretation. It has been suggested that more explicit criteria will lead to more consistent use of this item number.

One apparent anomaly of the schedule is where there is an acute presentation with a serious obstetric complication, such as severe pre-eclampsia or a major placental abruption. The attendance can be of very lengthy duration, but may only be remunerated at a level appropriate to a follow-up visit. It has been suggested that there be a time-based item, Long Consultation, in the event that such an attendance is particularly time-consuming.

With increasing pressure to reduce length of stay, many hospitals or jurisdictions fund a domiciliary visit by a midwife in the early puerperium. Such a visit is often greatly appreciated by a new mother, but may be less available to the private patient as there is currently no MBS funding for such a visit. A new item number for such a visit has been suggested.

Many of you will have read over the holiday period of the somewhat controversial title of a debate at the Tasmanian/ Victorian Regional Scientific Meeting held on 26–28 February 2016. Dr Amanda Dennis wrote an excellent reply to the controversy titled ‘New Generation of Doctors Deserve Practical Advice on Professional Life, Pregnancy’ which was published in an abridged format in the Australian. A copy can be found on the College website. The episode has highlighted the importance of increasing the College presence in social media and this will be a College priority over the next months.

The Skilled Occupation List (SOL) is managed by an Australian Government-appointed committee to support skilled migration. Intending immigrants from occupations on the SOL receive additional points when they apply for skilled migration or even some family sponsored migration. Given the great increases in Trainee and new Fellow numbers and future workforce predictions, the College has made a submission recommending removal of our discipline from the SOL. This does not address the issue of workforce distribution, which remains a high priority for the College. There is also an imperative that we ensure that current Trainees receive the best possible procedural training. 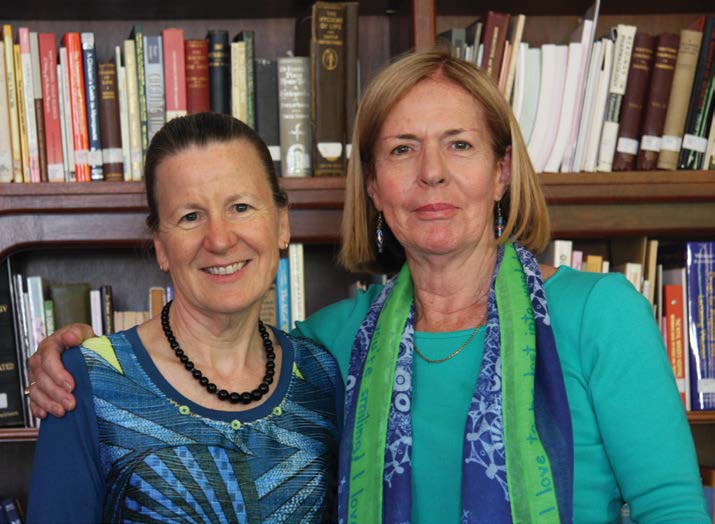 The former and current Editor-in-Chief of ANZJOG, Prof Jan Dickinson and Prof Caroline de Costa, celebrate the passing of the baton in the Frank Forster library, College House, Melbourne.

‘The College has been working with government representatives in both Australia and New Zealand to provide guidelines for pregnant women with respect to the outbreak of Zika virus.’

The College has been working with government representatives in both Australia and New Zealand to provide guidelines for pregnant women with respect to the outbreak of Zika virus. Differences in availability of serological testing will mean that the advice for at-risk pregnancies is quite different in Australia and New Zealand. Information has been issued by the various jurisdictions (links on the College website) as well as a more specific College Communiqué advising on obstetric management where maternal infection is confirmed or probable.

Following the discontinuation of locally produced prostaglandin F2 (PGF2) alpha, hospital pharmacies should now be able to access overseas product with either PGF2 alpha (dinoprost; Enzaprost or 15-methyl-PGF2 alpha (carboprost; Prostinfenem). Usage in Australia will be via the Special Access Scheme (category A). The routes and doses of these two drugs are different and the College Statement on the management of postpartum haemorrhage has been updated to incorporate this information.

The College is indebted to Prof Jan Dickinson’s outstanding service as Editor-in-Chief of ANZJOG and is very pleased to welcome Prof Caroline de Costa to the position.