Reports of adverse outcomes for mothers and/or babies are always upsetting. Recent events in Victoria concerning infant deaths at a regional hospital have attracted significant media attention, resulting in a Department of Health investigation and the reporting of three of the deaths to the State Coroner. The Coroner’s Report found significant errors were made in the care of the babies during labour and birth. She described the handling of care in each case as ‘sub-optimal’, with the misinterpretation of the cardiotocograph (CTG) a feature common to each. While there were other causal factors indicated in the report, including entrenched cultural behaviours and attitudes, the identification of poor CTG knowledge as a common element is significant.

The Fetal Surveillance Education Program (FSEP) was funded in 2004, by the Victorian Managed Insurance Association (VMIA) and the Department of Human Services (DHS), and developed by RANZCOG in collaboration with Southern Health, the Mercy Hospital for Women, the Royal Women’s Hospital and the Victorian branch of the Australian College of Midwives (ACM). The pilot program was developed in response to a review of nearly 400 cases of obstetric medico-legal claims in Victoria, arising between 1993 and 1998, that identified inadequate or inappropriate use of intrapartum fetal surveillance as a major contributor to the claims burden. Since its introduction, the program has continued to grow in demand and gain acceptance as an evidence-based, standardised educational program designed for multidisciplinary teams.

Research is currently being undertaken to determine the efficacy of the FSEP in terms of neonatal mortality and whether the introduction of the program can be attributed to a reduction in adverse outcomes for newborns and mothers. Regardless of any associated impact, however, the FSEP has provided a range of health practitioners, including obstetricians and trainees, with training in CTG interpretation, which has been identified as a critical skill for those caring for women during delivery.

RANZCOG, as a provider of education and training in women’s health, has been a proactive leader in Australia, New Zealand and the Pacific region for many years. Fellows of the College provide many hours of their valuable time to help train and mentor future O&G specialists in numerous ways. For example, in early May, College House welcomed a parade of pregnant women who were on site to assist trainees learning the skills of ultrasound under the expert guidance of volunteer Fellows. In mid-May, an Obstetric Skills Workshop was conducted at the Royal Women’s Hospital in conjunction with a meeting of the Pacific Society of Reproductive Health, which involves a number of College Fellows. This work is all undertaken pro bono and out of a desire to contribute to the provision of excellence in women’s health.

This is hardly news to most of you; however, the broader community are largely unaware of the role of RANZCOG and how many of them have likely directly benefited from the work of the College – through giving birth, being born or being cared for by a specialist O&G or GP obstetrician in the region. Medical colleges have generally steered away from self-promotion, preferring to get on with the job of caring for patients. However, in the increasingly crowded healthcare space, it is becoming apparent that raising awareness of what we do should be a priority if RANZCOG wishes to be the pre-eminent source of information for women.

Regarding the ‘M’ word

FSEP, Obstetric and Surgical Skills Workshops, PROMPT, C-QuIP and the Nuchal Translucency Ultrasound Education and Monitoring Program are just a few of the activities run by RANZCOG, many in collaboration with other professional groups, to upskill and train clinicians working in women’s health. The breadth and depth of knowledge that exists within the College membership is extensive and yet in a quick Google search of ‘women’s health issues’ the College is notable only by its absence (see Figure 1). 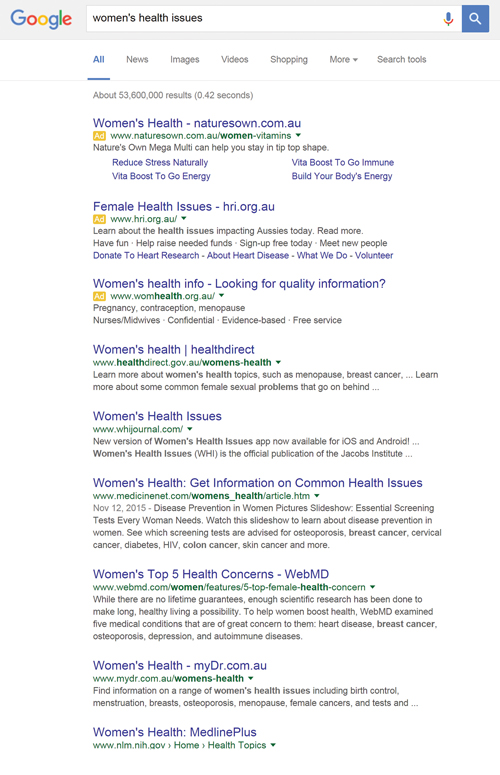 Figure 1. When Googling ‘women’s health issues’, where is the College in these results? The first College webpage search result is the last entry on page seven of the Google search.

This was highlighted to the College Board and Council at a recent presentation regarding social media, with the inclusion of a number of ‘doctor’ websites quite revealing. This led to the suggestion that all doctors should be provided with a mug bearing the legend ‘please do not confuse your Google search with my medical degree’ upon graduation (perhaps you already have one).

As part of RANZCOG’s Strategic Plan for 2015–19, the Board expressed the desire for the College to be the go-to authority on women’s health issues. We are hopeful that recent staff changes, including the recruitment of a Membership and Marketing Director, will assist in this goal, while ensuring that we retain the traditions, history and integrity that Fellows, trainees and members value. Already work has commenced on a new website and the development of a suite of patient information resources that are user-friendly and accessible. We are moving into the ‘twittersphere’ and are introducing apps to make our members’ busy lives easier. It is an evolutionary process, but we are excited about the future growth and ongoing development of RANZCOG as a contemporary education provider and advocate for excellence in women’s health.