On a cold November morning in the year 1817, prostrate in her bed at the royal residence of Claremont House outside London, the 21-year-old Princess Charlotte, daughter of the Prince of Wales and third in line to the throne of England, took her final breaths. She had just endured a labour of more than 50 hours, resulting in the spontaneous vaginal birth of a stillborn son. The subsequent postpartum haemorrhage, no doubt related to the prolonged labour, finally carried her off. Throughout her confinement, royal physicians had been in attendance, but they dithered, unwilling to apply the forceps to the royal personage in order to hasten delivery. Timely application of this instrument, which had been in existence for around 200 years, might have resulted in a live infant and a healthy mother, and subsequent events – the rapid marriage of the brother of the Prince of Wales, the Duke of Kent, and the production of another heir to the throne, in the person of Queen Victoria – might never have occurred. Britain might never have known the Victorian Age. 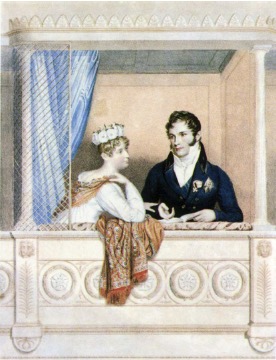 Princess Charlotte Augusta of Wales, who would have been Queen had she not died following childbirth at the age of 21.

Prolonged and obstructed labour have long been recognised as causes of maternal and perinatal mortality and morbidity and, since the Middle Ages at least, instruments have been devised to try to assist expulsion of the fetus from the birth canal. Arab physicians developed hooks and instruments with teeth to seize fetal tissue and deliver it forcefully, sometimes piecemeal. In 1554, Rueffe, a Zurich obstetrician, described a smoother instrument somewhat like later forceps, but with a fixed joint so that both blades needed to be applied simultaneously to the fetal head, rather limiting its usefulness. A single-bladed instrument, the vectis, and other lever type tools, also appeared around this time. Alternatively, if internal version could be performed, the fetus might be turned to a breech and extracted manually, with hooks to the after-coming head if there were difficulties with this. Needless to say, these techniques were often fatal for the infant and frequently injured the mother as well.

In a pre-anaesthetic and pre-antiseptic age, then, when attempts at caesarean birth were universally fatal for women, an instrument that could deliver a live baby from an obstructed labour, and limit damage to the mother, would be an enormous advance. The obstetric forceps in its present form is attributed to the Chamberlen family, French Huguenots escaping persecution whose story in England began with the arrival of Dr William in 1569. William had five children including two sons both called Peter and both doctors, of whom the younger (who I shall refer to as Dr Peter) had a son called (you guessed it!) Peter, who had a son called Hugh who was a doctor, and who had a son called (yes!) Hugh, who also was a medical practitioner. All the Peters and both Hughs, as well as other Chamberlen family members practised obstetrics, and between them they managed to keep the design of their forceps secret for more than one hundred years. They achieved this by arriving at the labouring woman’s house with the forceps concealed in a velvetlined box, sending all possible spectators out of the bedchamber and performing the delivery with the blankets covering their heads and the bedsheets tied about their necks. As women at the time lay on deep feather beds the application of the forceps was indeed a skill that took some acquiring, and one largely achieved by touch rather than sight. 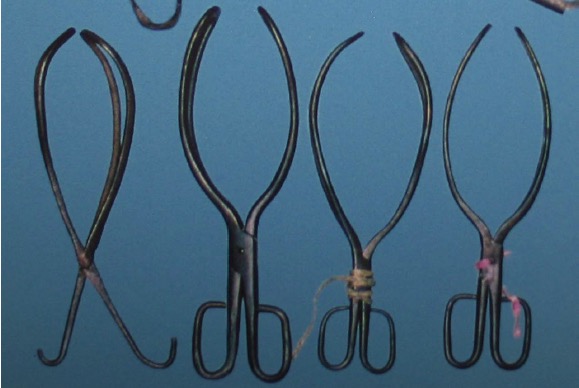 The Chamberlen instruments – this photo is part of a display at College House, Melbourne.

We now know what the original Chamberlen instruments looked like, as in 1813 some of them were found hidden beneath the floor of a house in Essex in which Dr Peter had died some 130 years earlier, and these are now displayed in the Museum of the Royal College of Obstetricians and Gynaecologists in London. They consist of four pairs of forceps, one crudely constructed and probably experimental, and probably the work of the older of the first two Peters, the three others each with some improvement on the first. The concept of two blades separately applied, but fitting together to form a single instrument was present from the beginning, as was the cephalic curve of the blades and the fenestration that reduced the weight of the instrument and hence the pressure on the fetal head. Later, an articulation was developed to lock the blades and, later still, a tape was used to tie them together. The Chamberlen instrument was very successful and family members travelled right across England bringing relief to women in obstructed labour (and, of course, reaping considerable financial benefits).

William Smellie’s straight forceps (c1750). The forceps are made of iron and covered in leather, fragments of which are still visible on the handles and blades.

By the early 18th century the design of the Chamberlen forceps had leaked out, and soon the instrument was in use by obstetricians throughout Britain and on the Continent. In 1733, English obstetrician Edmund Chapman wrote that: ‘…as to the forceps, it is a noble instrument, to which many now living owe their lives.’ Throughout the 1700s there were efforts to improve forceps design in order to lessen damage to mother and baby. The great English obstetrician William Smellie introduced the pelvic curve, making it possible to effect delivery from higher in the pelvis, a notched handle that was easier to grip, and a neater locking device. An example of Smellie’s forceps can be seen in the College collection in Melbourne; the metal is covered with leather, to increase maternal comfort – or more likely reduce discomfort – and Smellie greased the blades with lard as a lubricant. Smellie was nevertheless cautious about interfering with nature in childbirth; he recommended a forceps rate of one in 1000 births. That there was still great caution about forceps use even in the 19th century can be seen by the demise of the unfortunate Charlotte, who spent 24 hours in the second stage of labour without an attempt at operative vaginal delivery.

The 1800s also saw the appearance of numerous variations in design – detachable handles and blades, assorted materials for construction – but the basic concept of the application of interlocking blades followed by traction remained the same. James Simpson of Edinburgh, chloroform pioneer, developed both long and short versions of his personal forceps, for mid-cavity and outlet deliveries, respectively. In France, Tarnier worked on designs for axis traction device that would alter the direction of the pull through the various planes of the pelvis. In 1915, Kielland in Norway reduced the pelvic curve which enabled rotation of the fetal head using the forceps themselves (rather than manual rotation preceding application of the other forms of the instrument that retained the pelvic curve). Kielland also invented a sliding lock to allow correction of asynclitism. By the end of the 19th century forceps both long and short were in wide use; rates of around six per cent in home deliveries and 18 per cent in hospital births are quoted for many European centres.

Up till that time the instrument was used only for prolonged or obstructed labour. In 1920, the US obstetrician De Lee proposed the use of forceps ‘prophylactically’, achieving delivery to spare the mother and infant the effects of long labour. This further led to the idea of proceeding to a forceps delivery when there was fetal distress – diagnosable then only by the use of the Pinard horn to detect fetal bradycardia – a truly revolutionary idea. By the last decades of the 20th century, forceps delivery was widely used for a variety of indications, often along with epidural analgesia and fetal monitoring, the two latter accused by some of being a direct cause of the increased forceps rate.

Edward Parry-Jones’s drawings of forceps are held in the College Collection.

What role, if any, do forceps have in 2015, when we have a national caesarean rate of more than 30 per cent, widespread use of the vacuum extractor, which itself has undergone many modifications and improvements in recent years, and a fundamental belief in obstetric practice that, in the words of London obstetrician Peter Huntingford, ‘…there are now only two routes of birth: easy vaginal delivery, and caesarean section’? Added to this is the fact that those of us trained in the latter decades of the 20th century, when forceps delivery, including mid-cavity, was widely practiced, are now approaching retirement. Adequate training of our younger colleagues, particularly in the safe use of rotational forceps, with fewer cases available and reduced working hours, has become problematic. Training and competence in the use of mid-cavity rotational forceps is likely to become more and more inadequate. Increasingly, I believe, we will see less use of forceps in this situation and increasing use of emergency caesarean section without a prior attempt at operative vaginal delivery.