A 75-year-old woman (G4P3), presented with a 4cm firm mass in the right iliac fossa region that she reported had been present since her hysterotomy for a mid-trimester termination 42 years ago. Her surgical history also included a vaginal hysterectomy for pelvic organ prolapse, and histology of the uterus revealed external endometrial glands and stroma consistent with pelvic endometriosis. 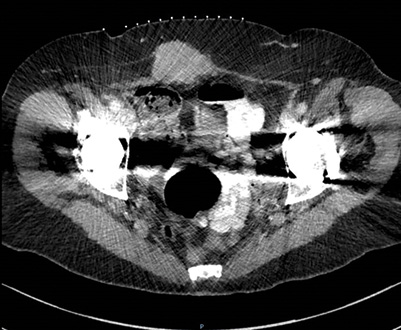 Figure 1. CT scan of abdomen. Enhancing mass arising from the anterior abdominal wall extending into the subcutaneous fat, which has appearances suggestive of a tumour.

A CT scan of her abdomen and pelvis revealed an enhancing mass measuring 5.8cm in transverse diameter by 3.6cm in AP diameter arising from the anterior abdominal wall musculature extending into the subcutaneous fat, which was suggestive of a tumour. (Figure 1)

A core biopsy of the mass confirmed a moderately differentiated adenocarcinoma consistent with a primary from the gynaecological tract; endometriosis was noted within the specimen. To complete the staging process, a CT scan of her chest showed no evidence of metastatic disease. Her CA-125, CEA and CA19-9 were within normal range.

She underwent a wide local excision of the mass, including bilateral salpingo-oopherectomy and omentectomy. A moderately differentiated endometrioid adenocarcinoma in abdominal wall endometriosis was confirmed. Given full resection of this mass and no definitive sign of metastatic disease, adjuvant treatment was not recommended.

A 52-year-old nulliparous woman presented with severe pelvic pain and vaginal bleeding. On examination, a 5cm smooth, firm posterior vaginal wall mass was found. A rigid sigmoidoscopy was performed up to 18cm, which found no rectal masses.

An MRI revealed an ovoid 12x11x9cm midline pelvic mass, displacing the bladder anteriorly and rectosigmoid posteriorly. Her CT scan showed a cystic mass posterior to the bladder with enhancing solid peripheral tissue, which displaced the rectum posteriorly and intimately associated with the distal sigmoid. There was no evidence of metastatic disease. She also had an elevated CEA and CA19-9.

Three months after her initial presentation, a pelvic posterior exenteration and anterior resection of pelvic mass was performed. A hypervascular mass invading the terminal ileal loop, rectum and vaginal vault was seen during the surgery. Histology revealed a malignant mixed Müllerian tumour arising from endometriosis involving loop of colon. She underwent pelvic adjuvant radiation therapy and adjuvant chemotherapy (paclitaxel and carboplatin). She remains free of recurrence and metastases four years after her index surgery with normal tumour markers.

A 58-year-old woman (G3P1) presented with post-menopausal bleeding. She had a BMI of 32 and a background of hypertension that contraindicated use of HRT. Her uterus felt enlarged at 20 weeks in size on examination, no adnexal masses found.

A pelvic ultrasound revealed a 13.2×11.6×7.4cm heterogonous mixed solid/cystic mass seen in the right adnexa with areas of vascularity seen inside the septae (Figure 2). Uterus revealed an endometrial thickness of 0.3cm in fundus and 0.9×1.7×1.7cm heterogeneous lesion posteriorly in the endometrium (Figure 3). An MRI of her abdomen and pelvis showed complex cystic mass measuring 14x13x8cm with a well-defined border arising from the right ovary. This mass contained numerous septations within a well-encapsulated lesion, which contained several solid nodular areas. Her staging CT scan was normal and so were her CA-125 and CEA. 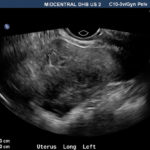 Figure 2. A 0.9×1.7×1.7cm heterogeneous lesion seen posteriorly in the endometrium, suspicious for endometrial tumour or possibly may represent a submucosal fibroid. 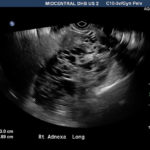 She was scheduled for a total abdominal hysterectomy, bilateral salpingo-oopherectomy, removal of pelvic abdominal mass, lymph node dissection and partial omentectomy. A mass adherent to the anterior surface and mesentery of the recto-sigmoid colon was seen. However, it did not appear to arise from either ovary or fallopian tubes. Histology revealed a grade 1 proliferative endometrioid adenofibroma with focal adenocarcinoma arising from ectopic ovarian tissue.

Adjuvant chemotherapy or radiotherapy was considered, although felt to be unbeneficial given no evidence of metastatic disease and ill-defined tumour origin.

Endometriosis is diagnosed when there is a presence of endometrial glands and stroma outside of the uterine cavity.3 4 5 The majority of endometriosis-associated neoplasms are of ovarian origin and only 25 per cent involve extraovarian sites; mainly the bowel, but rarely, the abdominal wall. 6 7 8 9 10 11

Unfortunately, at present, no clear causal relationship has been identified. One theory is the association between hyperoestrogenism and development of malignancy from endometriosis. The proposed theory involves a shared origin between endometriotic deposits and endometrial tissues, therefore both responding in a similar fashion when exposed to hormonal stimulation.12 13 14

A case series by Modesitt et al included 21 patients with extraovarian cancers arising in endometriosis and reported an association between HRT use and extraovarian cancers, with 62 per cent receiving HRT versus 10 per cent in the other groups.15 Apart from one case involving a nulliparous patient, our other two cases had no past history of excess oestrogen exposure. All of our patients had BMIs between 25 and 30.

Other speculated links between endometriosis and malignancy include the use of carcinogenic products, such as dioxin and polychlorinated biphenyls. Dioxin is a by-product of the chlorine bleaching process used in manufacturing tampons. It is a potent inhibitor of T lymphocyte function and has immunosuppressive properties.16 17 Genetic anomalies such as the loss of heterozygosity of chromosome 5q is reported to play a role in 25 per cent of endometriotic sites affected by carcinoma compared to 6 per cent without.18 19 However, since most endometriosis remains benign, it is worth considering the theory that some endometriotic cells might undergo somatic mutation involving oncogenes or tumour suppressor genes, such as p53, which has been reported to be elevated in cases with malignant transformation.20 21 This is specific to endometriosis co-existing with ovarian clear cell carcinoma.22

More than 50 per cent of extraovarian neoplastic changes of endometriosis occur in the colon, rectovaginal septum and vagina. Of the 40 cases of endometriosis-associated intestinal tumours (EAIT) documented in the literature, 65 per cent involve the rectosigmoid colon, an area of the bowel having the highest incidence of endometriosis.23 24 One of our discussed cases revealed a neoplastic mass adherent to the anterior surface of the rectosigmoid colon deriving its blood supply, while the other involved a mass invading the terminal ileum, rectum and vagina. Malignant transformation of abdominal wall endometriosis is rare in the literature, often presenting at the previous abdominal incision site 6–20 years after initial abdominal surgery.25

The majority of EAIT cases reported in the literature are endometroid carcinoma.29 30 As these often occur in the rectosigmoid colon, it can be difficult to distinguish high-grade endometroid carcinoma from poorly differentiated colonic carcinoma. There are three histologic characteristics that may assist in distinguishing the two. Firstly, the bulk of EAIT occur in the outer walls of the bowel. Secondly, the neoplastic endometroid cells form tubular glands lacking in intracellular mucin. Thirdly, and finally, the use of immunohistochemistry is helpful in determining the origin of tumour and, therefore, distinguishing the two.31 [/note]Slavin RE, Krum R, Dinh TV. Endometriosis-associated intestinal tumours: a clinical and pathological study of 6 cases with a review of the literature. Hum Pathol. 2000;31:456-63.[/note]

Sarcomas and carcinosarcomas, also referred to as mixed Müllerian malignant tumours, are best known as uterine tumours. Their association with endometriosis is rare and, if present, frequently involves the ovaries, but in the extragonadal setting often arises from the vagina or rectovaginal septum.32 33 34 Booth et al describe a homologous carcinosarcomatous mass closely associated with endometriosis in a patient with presenting complaint and history of a previous hysterectomy and bilateral salpingoopherectomy for benign reasons, similar to our patient in case two. This mass, however, was found in the retroperitoneal compartment encasing the left ureter. This is perhaps the most recently documented extragonadal carcinosarcoma arising in endometriosis.35

The first-line treatment for extraovarian endometriosis-associated malignancy is complete surgical resection of the offending pelvic tumour to obtain a histological diagnosis. Staging of the disease can be performed with pelvic and para-aortic lymph node dissections, omentectomy, multiple peritoneal biopsies and, sometimes, bilateral salpingo-oophrectomy.36 37

Depending on the histology and staging, chemotherapy and/or radiation therapy can be considered. However, it is difficult to establish the most appropriate approach to adjuvant treatments due to the rarity of this disease in extragonadal sites.

A review of the scarce literature on this topic reports limited effectiveness for postoperative radiation and chemotherapy in endometriosis-associated neoplasms. Peritoneal and ovarian cancers are chemosensitive, but chemotherapy in those with endometrial cancers has limited efficacy.38 39 40 41 Modesitt’s series of 21 cases described factors associated with survival in women with endometriosis-associated cancers. All patients underwent surgery and 71 per cent received adjuvant chemotherapy; 74 per cent were then disease free after completion of initial adjuvant therapy. Using a multivariant analysis, the type of chemotherapy was not significantly associated with survival.7 No adjuvant chemotherapy was prescribed in two out of our three cases as there was no evidence of metastatic disease. In a review by Dilsilvestro et al, chemotherapy was recommended to all patients who, at the time of surgical exploration, were found to have widespread intraperitoneal disease.42 This often consists of paclitaxel and one of the platinum agents (cisplatinum or caboplatinum).43

The use of radiation therapy was described for malignancy arising in endometriosis when disease is localised to the pelvis.44 In 2003, Booth described a retroperitoneal localised Müllerian carcinosarcoma receiving adjuvant external beam radiation therapy to the pelvis, similar to our patient in case two.45 The patient remained disease free after eight months of follow up. There has not been recent literature on the role of radiotherapy nor has there been literature on the combined use of chemotherapy and radiotherapy.

The diagnosis of malignant transformation of endometriosis, especially in extraovarian sites, is uncommon and not well understood. Such neoplasms should be considered in women presenting with a pelvic mass, even in those with a previous hysterectomy and bilateral salpingooopherectomy. Primary management is by surgical resection. More research in the role of adjuvant treatment is needed.