The ovary has two primary functions: ovulation, and the synthesis and secretion of female sex steroid hormones.1 Ovarian function is controlled by the hypothalamic-pituitary-ovarian (HPO) axis, as outlined in Figure 1. 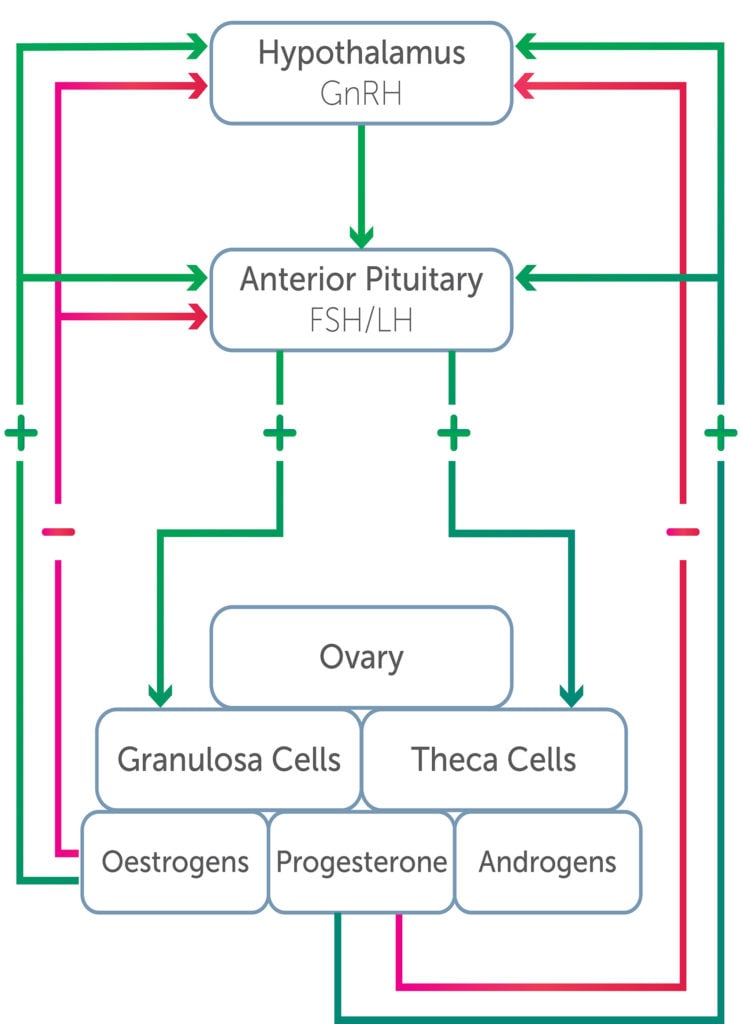 Oestrogens include oestradiol, oestrone and oestriol. Oestradiol is produced by the granulosa cells of the developing follicle and also by the corpus luteum. Oestrogen can also arise from peripheral conversion of androgens to oestrogen in skin and adipose tissue. Its production is stimulated by follicle stimulating hormone (FSH) and lutenising hormone (LH). Once released, it is bound to albumin and sex hormone binding globulin (SHBG), allowing steady release. To act upon a cell, it interacts with a receptor that stimulates protein synthesis and a cellular response. Cells release oestradiol by converting it to estrone and estriol, which are less potent and subsequently removed from the body via urine and bile.2 The mechanisms of action of oestrogens outside of pregnancy and lactation include:3

Progesterone is secreted from both the adrenal glands and the ovary. Pregnenolone is synthesised in the ovarian tissue compartments by entry of cholesterol into the cell through a receptor for LDL.4 It is then converted to 17-α-hydroxyprogesterone and androstenedione (an androgen) in the granulosa cells of the corpus luteum.5

The mechanisms of action of progesterone outside of pregnancy and lactation include:6 7

Dehydroepiandrosterone sulphate (DHEAS), dehydroepiandrosterone (DHEA) and androstenedione are pro-androgens that require conversion to testosterone and dihydrotestosterone to be active at androgen receptors.8 In the female, testosterone, dihydrotestosterone and androstenedione arise from the ovary and adrenals. DHEA and DHEAS are derived from the adrenal glands. LH promotes the secretion of androgens within theca cells of the ovary. Androgens are precursors to oestrone and oestradiol. Polycystic ovarian syndrome (PCOS) is characterised by hyperandrogenism and will be discussed in greater detail. It has been demonstrated that ideal levels of ovarian androgens optimise the process of ovulation, whereas excess levels reduce ovulation and follicle health.9 Hyperandrogenism is a significant cause of menstrual irregularity in female athletes.

The effect of exercise on the ovary

Exercise in obese and overweight women

Moderate exercise has been demonstrated to restore ovulation and improve fertility in overweight and obese women, independent of weight loss.10 A mechanism for this has been purported to be increased insulin sensitivity caused by reduced visceral fat and increased uptake of glucose by skeletal muscle.11 There is less evidence regarding improved ovulation with exercise in women with a healthy weight range.

The HPO axis is exquisitely sensitive to energy deficiency and elevated stress. Functional hypothalamic amenorrhoea is a diagnosis of exclusion and associated with suppressed GnRH pulsatility.12 A systematic review by Hakimi and Cameron, outlined how vigorous exercise reduced fertility in women, except for those who were obese and overweight.13

Endurance athletes complete high volumes of training in order to realise new physical and psychological limits. This constant state of overreaching and recovery walks a fine line, often disrupting the HPO axis in the female athlete. Oligomenorrhoea is common, as is primary and secondary amenorrhoea. The prevalence of secondary amenorrhoea in collegiate female athletes ranges from 2–5% and is as high as 69% in dancers14 and 65% in long distance runners.15

Energy availability refers to the difference in dietary energy intake and all energy expenditure required to support homeostasis, hormonal health, activities of daily living, growth and repair, in addition to that required to train and compete in sporting activities.16 Low energy availability is common in athletes and is associated with disordered eating, eating disorders and energy restriction in an attempt to maintain low body fat percentage. This may be imposed by the sport (such as weight restricted categories in rowing, combat sports and power lifters) or for performance or aesthetic purposes (power to weight ratio in runners, gymnasts, divers).

The term ‘female athlete triad’17 was defined by the IOC as the combination between disordered eating and irregular menstrual cycles eventually leading to reduced bone mineral density (BMD).18 It has been replaced by the term relative energy deficiency in sport (RED-S), created in 201419 to describe the syndrome where an athlete of any gender is operating in a state of relative energy deficiency. This occurs where energy is used for physical performance and sporting output to the detriment of physiological function including metabolic rate, menstruation, bone health, immunity, protein synthesis, cardiovascular health, psychological health, libido and mood. Low levels of leptin, found in athletes with RED-S, are thought to downregulate GnRH in the hypothalamus, thereby reducing LH and FSH secretion and stimulation of the ovary.20

A significant consequence of RED-S is that of reduced BMD. This can result in bone stress injury, which can be season- or career-limiting in athletes. Oestrogen inhibits the activity of osteoclasts that promote bone resorption. Suppression of the HPO axis and subsequent low levels of oestrogen are detrimental to the achievement of peak bone mass. High training loads are often undertaken in the crucial period where BMD is being optimised (that is, up to the age of 25). Exercise is osteogenic and athletes in weight-bearing sports should have BMD 5–15% higher than non-athletes.21 Mitchell et al found the trabecular BMD to be greater at the weight-bearing distal tibia in athletes versus non-athletes, and also found that young amenorrhoeic athletes have lower BMD and an increased prevalence of fracture compared with eumenorrheic athletes and non-athletes.22 Failing to achieve peak BMD and subsequent relatively low BMD is not only a risk to their athletic career but increases long-term osteoporosis and fracture risk.23

Functional hypothalamic amenorrhoea due to RED-S is a diagnosis of exclusion.24 Oligomenorrhoea or amenorrhoea in an athlete is not normal, and is a red flag to investigate imbalance in training load/stress and energy availability, as well as a prompt to screen for other causes of menstrual irregularity.

PCOS is characterised by menstrual irregularities, hyperandrogenism and metabolic abnormalities, including hyperinsulinemia. The prevalence of PCOS in the general population is approximately 6–15%,25 but is thought to be present in approximately 30% of female athletes.26 27 Females with higher circulating androgens are naturally stronger, faster and recover better. Hyperandrogenism associated with PCOS may improve physical performance28 and attenuate the negative metabolic effects of reduced oestrogen.29

Exercise can be used to induce ovulation in obese and overweight women with PCOS.30 This is purported to be a result of increased insulin sensitivity secondary to exercise.

The effect of the ovary on exercise

Just as exercise has been demonstrated to affect ovarian function in ways that have been well described, ovarian function affects exercise. Human physiology and sport science research has largely been conducted on untrained males who are, hormonally, more simple to study. A review of 1382 papers from 2011–2013 comprising over 6 million participants in sports science research showed 39% to be female.31 The major barrier to inclusion in research studies was hypothesised to be the menstrual cycle.32

The menstrual cycle and performance considerations

The literature suggests that oestrogen may promote endurance performance by altering carbohydrate, fat and protein metabolism, with progesterone often appearing to act antagonistically.33

During the follicular phase, where progesterone is at its lowest circulating levels, a female may have the more favourable hormonal profile for athletic performance. While significant research still needs to be undertaken, we know female athletes subjectively feel stronger, leaner, less bloated, have improved thermoregulation and higher plasma volume. When planning strength and conditioning sessions, females may achieve greater strength and hypertrophy gains by training with high frequency in the follicular phase of their menstrual cycle.34 The late follicular phase, characterised by the pre-ovulatory surge in oestrogen and suppressed progesterone concentrations, tends to promote improved performance in a cycling time trial.35

The luteal phase is associated with a prolonged surge of both oestrogen and progesterone and poses challenges for female athletes. Anecdotally, athletes report feeling as though they have less energy, feel bloated, retain fluid and experience pelvic pain and abdominal cramping. During short explosive exercise, oestrogen promotes contraction-stimulated glucose uptake into type I muscle fibres, which should be beneficial for performance in higher intensity aerobic exercise, but in the late luteal phase, progesterone antagonises this action.36

The high-performance sporting world is currently examining ways to periodise training and nutrition for female athletes to maximise performance around the menstrual cycle. Areas of interest include:

There is an association between hormonal levels and injury risk, particularly of the anterior cruciate ligament (ACL). Laboratory studies have shown that exposure of the ACL to oestrogen results in a dose-dependent reduction in fibroblast and collagen synthesis and that this effect is attenuated by the addition of progesterone.37 38 It has been postulated that Relaxin may have the same effect on the ACL in non-pregnant women as it does in pelvic ligaments in pregnancy.39 A quantitative meta-analysis concluded there is most likely increased ligamentous laxity around ovulation compared to the follicular phase.40 The luteal phase is the safest phase. Recent studies suggest oral contraceptives may offer up to a 20% reduction in the risk of injury, although the strength of the evidence is low.41

There are mixed conclusions around the use of the combined oral contraceptive pill (COCP) in athletes, but at the moment, the resounding message from sports physicians is that where an athlete has a disrupted menstrual cycle due to RED-S, the COCP will only mask this. Rather than prescribing the COCP to manage menstrual dysfunction in this population, efforts should be made to restore energy balance in the short term, with both performance and long-term health in mind.

The COCP reduces the following symptoms associated with menstruation, which may therefore assist with sporting performance: dysmenorrhoea, bloating and iron deficiency secondary to heavy menstrual bleeding.44

As previously discussed, there is a modest ligamentous injury protection risk provided by the COCP.45 A database of 165 748 patients and the incidence of ACL tear and concluded ‘OCPs have a protective effect on ACL tear, especially in the 15–19 age group’.46

Despite the theoretical metabolic and substrate usage improvement associated with oestrogen,47 and the proposed effect of the COCP on circulating growth hormone,48 the COCP has been shown to have no impact on skeletal muscle strength and no published data exists regarding the interaction between the COCP and muscle hypertrophy.2 We are yet to prove a significant difference across COCP and non-COCP users across a menstrual cycle for VO2 max, heart rate, stroke volume or cardiac output at maximal exertion.49 There is a possible decrease in VO2 max and increase in body mass for athletes on the COCP,50 although this increase in body mass and fat-free mass was not significant in the small randomised control trial by Romance et al.51 There is a possible decrease in muscle soreness after exercise and a blunted response to muscle damage.52

Limited research has been undertaken on the use of progesterone-only contraception and its influence on exercise. A study by Armstrong et al (2005)53 showed similar adaptations to heat and physical training in female athletes on the COCP and depot medroxyprogesterone acetate (DMPA). Loss of BMD using long term DMPA is a concern in young women (with already low levels of circulating oestrogen) especially where other risk factors for reduced BMD exist, such as RED-S.54

Sport Australia and the Australian Institute of Sport are currently looking to expand their research and connections in this area. Recently, a multisport workshop was held between athletes, coaches, health practitioners and physiologists, specifically looking at female athlete health and performance in regards to the menstrual cycle and hormonal contraceptive use. The project is looking to facilitate education and research as well as develop a network of preferred providers: sports physicians, gynaecologists and endocrinologists.