Emergency peripartum hysterectomy (EPH) is defined as a hysterectomy performed immediately following, or within 24 hours of, delivery. The reported incidence in developed countries ranges from 0.2 to five per 1000 deliveries.1 2

The most common causative factors are:

Over the past 20 years, the risk-factor profile for EPH has changed. There has been a shift in risk-factor profile, with atony and uterine rupture no longer the most common causes, those now being superseded by abnormal placentation, which is mainly related to prior caesarean section.7 8

Placenta praevia is associated with an approximately five per cent risk of hysterectomy, usually in association with placenta accreta. Frequency of abnormal placentation increases with number of previous caesarian births and advanced maternal age. Caesarean delivery and previous uterine surgery appear to be key risk factors for EPH. Knight et al quotes risk of EPH lowest in women undergoing a first delivery that was vaginal (1:30 000); and highest in women with two or more prior caesarean births (1:220).10 Silver et al quotes a risk of EPH of one per cent following first, second or third caesareans; two to four per cent following fourth or fifth procedures; and nine per cent for six or more caesareans.11

The main indication for EPH is massive obstetric haemorrhage that is unresponsive to conservative measures. Postpartum haemorrhage (PPH) is defined as blood loss greater than 500 mL at vaginal delivery and 1000 mL at caesarean.15 Rapid management of PPH is an essential skill that all obstetric teams require to reduce risk of an EPH.

It is important that placental location is carefully evaluated antenatally in women with a history of prior caesarean birth. Those with a suspected adherent placenta on ultrasound scan should be referred for further imaging, such as MRI.

Procedure should be undertaken without delay for cases of:17

Direct aortic compression can be used as a temporary measure to allow time for resuscitation to catch up and appropriate senior surgical support to be available.

The decision to perform an EPH should be made by a senior clinician and preferably after discussion with a second senior consultant.18 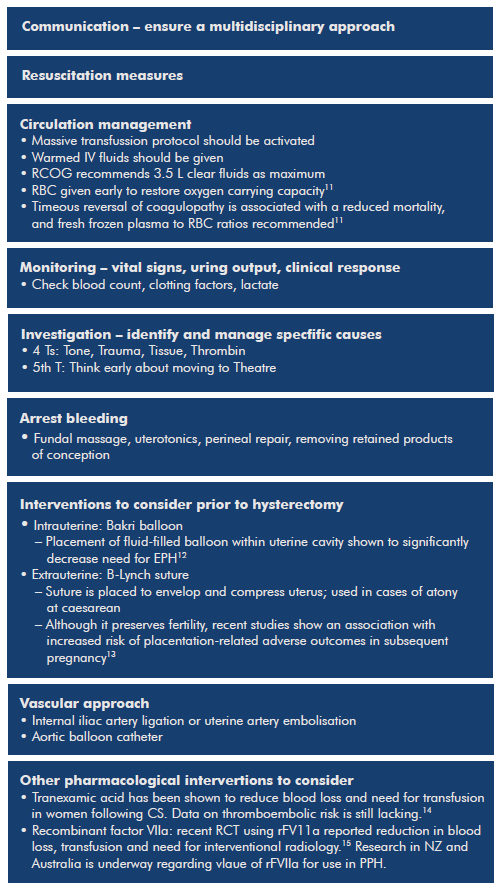 Undertaking an EPH is more complicated than a standard hysterectomy for the following reasons:

EPH has multiple consequences, affecting women physically and emotionally, as well as affecting the economy. The mortality and morbidity associated with EPH can be due to either the surgical procedure itself, or from the effect of the primary massive obstetric haemorrhage.

Worldwide mortality rates have been reported ranging from two to 15 per cent, with higher rates in developing countries.21 22 23 24

Research is scarce regarding EPH as is it a rare event. Most literature surrounding the topic are case studies or 10–20 year reports on incidence, epidemiology and management. Interestingly, in 2014, De Miguel et al published a report of 23 EPHs analysing the pathology of the placental site. They found that one-third of EPHs performed during a 10-year period were associated with placental site anomalies originating in the implantation site intermediate trophoblast.26

Massive obstetric haemorrhage requiring emergency peripartum hysterectomy is an uncommon, but serious, complication of childbirth, carrying significant morbidity and mortality. Prevention, rapid identification and active management of bleeding at, or following, delivery is essential to reduce the need to perform this procedure. With abnormal placentation increasingly becoming the major risk factor for emergency peripartum hysterectomy, it is important to address the increasing caesarean section rate.