Both internationally and throughout Australasia, sepsis is consistently one of the leading causes of maternal morbidity and mortality. Although pregnancy-related sepsis accounted for only 5 per cent of direct deaths in recent New Zealand and UK Maternal Mortality reports,1 2 sepsis is a significant and important contributor to maternal morbidity. The New Zealand Maternal Morbidity Working Group (MMWG) recently collated notifications of women admitted to a high dependency or critical care area at any point during pregnancy and in the 42 days post pregnancy, over a two-year period. Sepsis was the third leading cause of admission to a higher care area, after postpartum haemorrhage and hypertensive diseases of pregnancy, at 14 per cent and 15.1 per cent in their 20183 and 20194 reports respectively.

Unlike many emergencies in obstetric practice, sepsis has a more subtle presentation and may not invoke the same sense of urgency in clinical staff as a cord prolapse, acute haemorrhage or placental abruption. However, sepsis can be life threatening, as this clinical vignette from the 2014 UK MBBRACE-UK report5 highlights:

Severe acute maternal morbidity has been defined by Mantel et al as being ‘a very ill woman who would have died had it not been that luck or good care was on her side’.6 With falling maternal mortality rates, maternal morbidity is becoming an increasingly important indicator in maternity care and can be used to elucidate where improvements in maternity care systems can be made. The New Zealand MMWG undertook in-depth external multidisciplinary panel reviews of 32 of their 67 sepsis-related notifications of pregnant or recently pregnant women cared for in a high dependency or critical care area for their 2018 report.7 Reviews were structured on a modified version of Vincent and Amalberti’s LONDON framework of contributory factors.8 The six most common themes contributing to the severity of morbidity in these sepsis case reviews are listed in Box 1.

In response to these findings, the New Zealand MMWG and Health Quality and Safety Commission (the Commission) recommended:

To address the poor recognition of severity of sepsis, delay in its treatment and inadequate communication between staff, the New Zealand MMWG, together with the Commission, developed and tested a standardised maternity recognition and response system. This matches a national vital signs chart calibrated to maternity-specific physiology with a locally developed escalation and response pathway. The pathway mandates a response by an appropriately qualified responder within a timeframe appropriate to the degree of physiological derangement. Human factors research10 11  has been incorporated in the chart’s design to maximise ease of detection of abnormalities and to promote action if required. Further information on the New Zealand MEWS is available at www.hqsc.govt.nz/mews.

The New Zealand MEWS is a hybrid scoring system. Each of the eight vital signs contributing to a total score that mandates a response; an extremely abnormal single physiological parameter (pink or blue) can mandate a higher level of response than the associated score. Using this combined recognition and response system, both sepsis and other acute illness in maternity can be detected early in an objective manner, provide a set pathway for response and early appropriate management, which ultimately should reduce the severity of acute maternal morbidity.

Standardised recognition and response systems have reduced objective morbidity and mortality outcome measures in adult inpatients. For example, Ludikhuize et al12 did a study in the Netherlands before and after the introduction of an early warning score system and a structured handover tool (SBAR), in conjunction with a rapid response team in 12 hospitals, with two surgical and two medical wards in each. The study included over a million inpatient bed days and demonstrated a 40 per cent reduction in cardiac arrests and a 20 per cent reduction in hospital mortality, both of which reached statistical significance.

Recognition and response systems in maternity are not able to use hard end points such as cardiac arrest or mortality since they are thankfully rare in this population. However, early experience from using the national NZMEWS in my hospital appears to have improved early recognition of acute deterioration with an associated fall in ‘adult code red’ emergency calls since its introduction in July 2018 (unpublished data). Having one standard national system is also hugely beneficial to ensure a common language, both between maternity units, and for a mobile workforce. 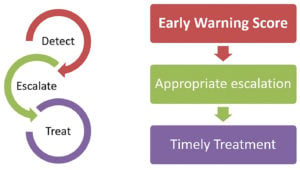 While vital sign scoring systems, such as New Zealand MEWS, can detect acute physiological derangement, they will not necessarily delineate organ dysfunction related to infection (sepsis) from other causes. MEWS does not provide an objective measure of sepsis severity. The Sequential (sepsis-related) Organ Failure Assessment (SOFA) score can determine risk of sepsis-related mortality on patients already in the intensive care unit;13 however, it uses criteria that are not readily available at the bedside, such as creatinine, platelet count and bilirubin. Quick-SOFA (qSOFA) is a useful bedside screening tool, it prompts consideration of sepsis as a differential diagnosis as well as further investigation of organ dysfunction related to sepsis and consideration of transfer for advanced organ support (see Table 1). A qSOFA identifies patients at higher risk of mortality better than SOFA when used outside the intensive care unit.14

SOFA has not been validated specifically in the younger pregnant population, so the Society of Obstetric Medicine Australia and New Zealand (SOMANZ) have obstetrically modified the thresholds for scoring within qSOFA and SOFA to account for normal pregnancy physiology, producing the omqSOFA and omSOFA15(see tables here). A score of 2 or more in the omqSOFA should prompt a more thorough assessment of severity of sepsis with an omSOFA, while concurrent resuscitation and definitive treatment is instituted. This scoring system is rapidly gaining traction as a useful tool for sepsis assessment in the obstetric population, though it has not been validated in large obstetric populations to date.

Fetus as the canary in the mine

The fetus is a useful early marker of maternal wellbeing. Early physiological deterioration related to sepsis can be masked by younger adults’ ability to compensate. In pregnant women, uteroplacental circulation is not autoregulated, therefore maternal sepsis resulting in circulatory insufficiency may lead to compromised fetal perfusion.16 This could precipitate fetal heart rate abnormalities or reduced fetal movements before overt deterioration in the mother. For this reason, acute fetal concern is included as a trigger for escalation and review in NZMEWS regardless of total vital sign score.

Maternal sepsis can sometimes be difficult to detect in its early undifferentiated form. Objective scoring systems such as MEWS and omqSOFA are useful screening tools for sepsis. These tools provide a convenient shorthand to convey severity of illness when communicating with senior staff, other medical disciplines and when planning treatment. Early institution of the ‘sepsis 6+2’ care bundle (Figure 3) in pregnancy-related sepsis, regardless of gestation as well as in the postpartum period, can save lives and reduce both duration and severity of sepsis-related morbidity.