Dr Catherine Hamlin AC was born Elinor Catherine Nicholson on 24 January 1924. Catherine and her husband Reg are known throughout the world as founders of the Addis Ababa Fistula Hospital, Ethiopia, the second dedicated fistula hospital ever built.

Catherine grew up in Sydney and considered herself a ‘tomboy’, riding horses and climbing trees. During her time in university, she heard a Christian missionary speak and decided to work in low-resource countries. Catherine obtained her medical degree in 1946 and, two years later, was offered a position as resident at Crown Street Women’s Hospital, Sydney. The medical superintendent at that time was Dr Reginald Hamlin. They were married in 1950. Over the next few years, they travelled and worked in England and Hong Kong and had a baby, Richard. In 1956, they decided to return to Sydney, but Reg was unable to obtain a job at Crown Street due to local politics. They decided to go to Adelaide to work but felt unsettled. While combing through medical journals in search of other employment, they came across an advertisement in the Lancet for ‘gynaecologist wanted to set up school of midwifery in Princess Tsehai Memorial Hospital, Addis Ababa’. The contract was for three years. The Hamlins arrived in Ethiopia in 1959, and the rest, as they say, is history.

The Hamlins encountered many conditions uncommon in higher resource environments, one of them being the obstetric fistula (OF). Female genital tract fistulas occur for a number of reasons such as iatrogenic (gynaecological procedures), trauma and infections. The most common cause of OF worldwide, however, is prolonged obstructed neglected labour. Women with OF usually labour for days and deliver a stillborn baby. The fetal presenting part in the maternal pelvis for such prolonged periods of time causes pressure necrosis of tissues between the fetus and maternal pelvis. OF results in an abnormal communication between the lower urinary tract and vagina, and/or anorectum and vagina. Thus, the woman with a genito-urinary fistula leaks urine continuously through the vagina, and if she has an anorectal fistula, she will also leak faeces/flatus through the vagina. 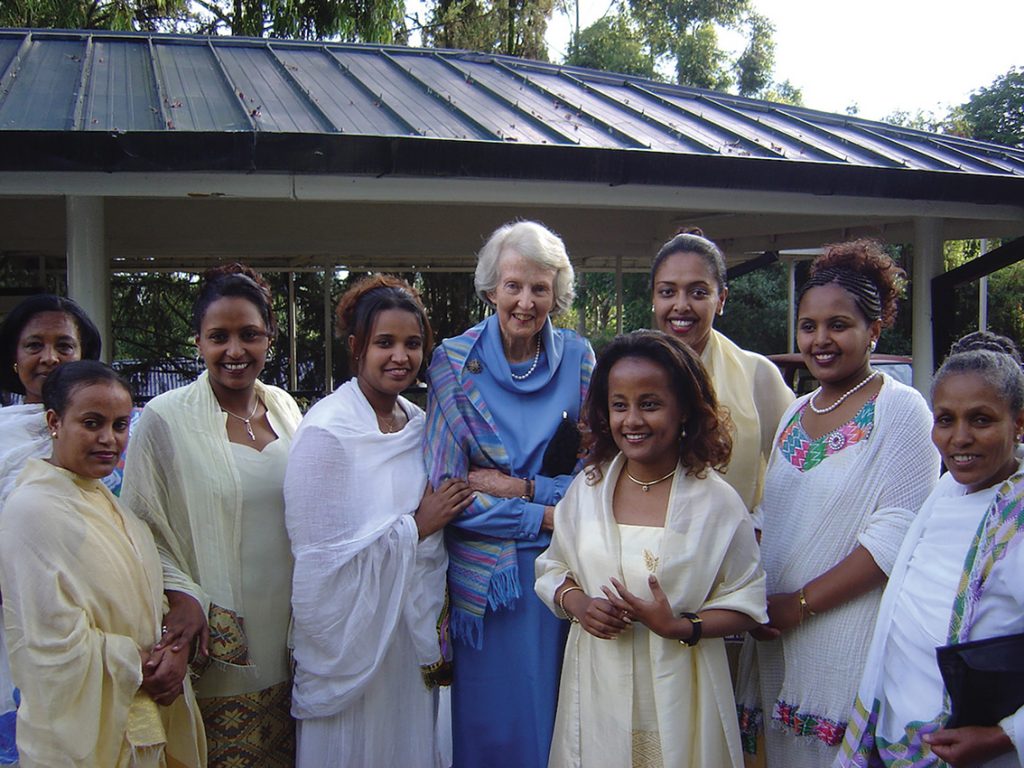 The plight of the OF women, such as being ashamed of their condition, social abandonment and social stigmatisation, was noticed by the Hamlins. As in Australia today, female genital tract fistula was uncommon and so the Hamlins did not have much prior experience in the management of this condition. They read published literature on the management of OF and communicated with fistula surgeons around the world (there were not many). They attempted surgical repairs and had success. However, in low-resource areas, with a paucity of primary healthcare, emergency admission/surgeries were common and the elective cases such as fistula surgery were frequently cancelled. The Hamlins had a vision of a dedicated fistula hospital, where women could have elective surgery without being cancelled and also provide a place for the women to have medical conditions optimised, such as malnutrition, malaria.

After years of hard work, fundraising, obtaining land, building and war, the Addis Ababa Fistula Hospital opened on 24 May 1975. Since then, thousands of women have been treated and many doctors (including the authors) trained in fistula surgery. The Hamlins obviously stayed beyond their initial three-year contract. Catherine always believed her faith had a vital role in her life and that she was ‘guided by God’. Even after Reg died in 1993, Catherine, having spent over 30 years in Ethiopia, decided to stay and continue with the work to fulfil their vision.

Anyone who has ever met Catherine would be aware of her selflessness and her compassion for her ‘beloved patients’. She would hold their hands and hug them when they first arrived at the hospital. These women arrived very ashamed of their condition, with urine dripping into their clothing and plastic shoes and thinking they were the only person in the world with this condition. To try to explain the fistula, Catherine would hold up a sheet of paper, make a small hole in middle of the sheet, pour some water on the paper and the water would run out of the hole. She would then say that surgery can be done to close the hole. 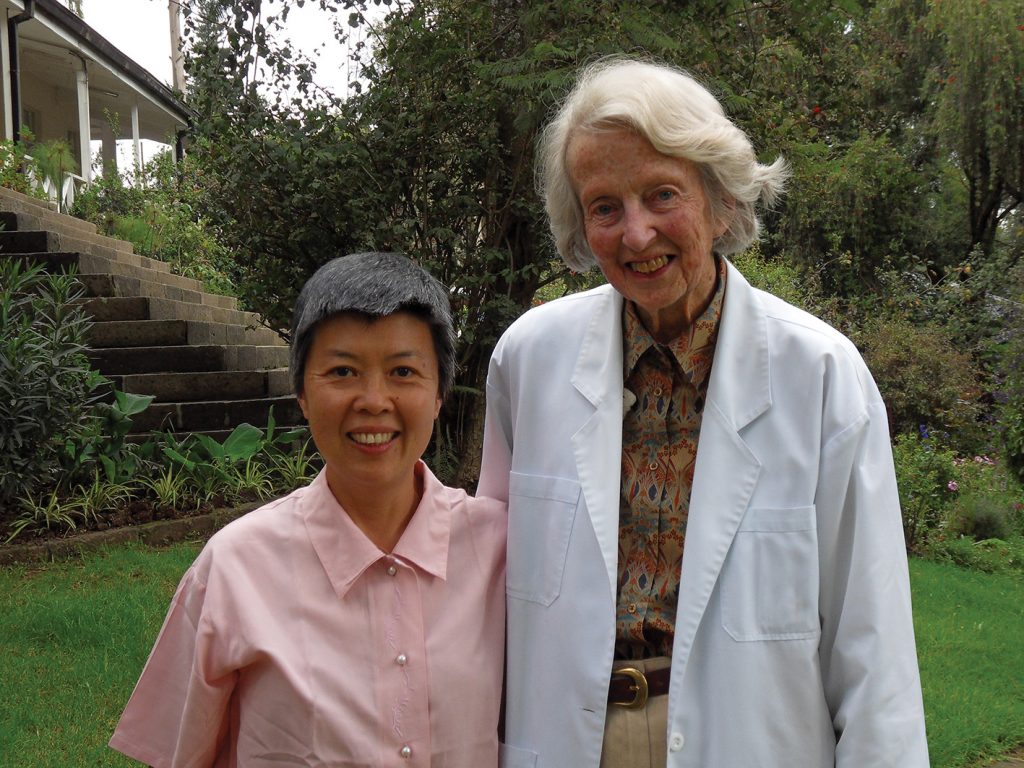 Catherine also transformed the hospital grounds into an oasis for the women. She would bring back cuttings of bushes/flowers that she was fond of during her travels and have them planted in the hospital gardens. The hospital she co-founded provides a holistic approach to care – literacy classes, small group classes, physiotherapy etc. There is hostel type accommodation for women who are undergoing care to optimise their health prior to surgery.

Catherine lived on the hospital compound. She was much loved by the staff and patients. She was very hospitable, often having visitors for cups of tea and biscuits/cake. Many entertaining and wonderful stories of her life and experiences were shared over tea or a meal.

Many of the hospital assistants were fistula patients. Catherine was well aware that some women were deemed incurable, either with such significant childbirth injuries or ongoing post-fistula complications. In the later years, income generation projects/workshops were available for these women.

Catherine’s hope was to prevent fistulas. As she became internationally renowned and resources became available, the Hamlin Midwifery College opened in 2007. The aim was to train midwives to recognise the abnormal progress in labour with early intervention or referral to prevent an obstructed labour and its consequences.

Catherine’s life accomplished much for women’s health around the world. Among her many awards, she received the Companion of the Order of Australia in 1995. She made fistula a topic to be discussed and not an obscure condition. Even in the mid-1990s when the authors commenced their fistula careers, fistula was not a popular topic, even in gynaecological circles. For those of us who have had the privilege of watching her operate, she was an excellent surgeon, and for those of us who had the honour of her tutelage, she was a wonderful teacher, mentor and an inspiration. She imparted upon the authors the love for her ‘beloved patients.’ For those of us who had come to know her, she was woman of faith, humility, integrity, dignity and principle. Catherine was a great advocate for women in medicine, women as surgeons and women with obstetric fistulas.