Emergency delivery in the setting of suspected fetal or maternal compromise is a challenge confronting the obstetric unit every day. Currently, the long-established decision-to-delivery interval (DDI) of 30 minutes for the most urgent cases remains the benchmark by which health services are measured. However, it is important to note that the evidence to suggest this improves neonatal outcomes is mixed.1 2

Currently, RANZCOG recommends a more nuanced approach to caesarean section (CS) urgency classification based on individual assessment, while recognising the importance of the 30-minute benchmark.3 These categories are as follows and are essentially similar to other professional organisation recommendations, including the Royal College of Obstetricians and Gynaecologists (RCOG) and the American College of Obstetricians and Gynaecologists (ACOG).4 5 6

Category 1: Urgent threat to life or the health of a woman or fetus.
Category 2: Maternal or fetal compromise, but not immediately life threatening.
Category 3: Needing earlier than planned delivery, but without currently evident maternal or fetal compromise
Category 4: At a time acceptable to both the woman and the caesarean section team, understanding that this can be affected by a number of factors.

RANZCOG recommends no specific time interval attached to each of the categories of urgency, although both RCOG and ACOG use 30 minutes as their benchmark for Category 1.

What is an imminent threat to life?

Before assessing the effectiveness in meeting the DDI, it is important to have a clear classification for what meets the criteria for urgent threat to the life or health of the women or fetus. Clinical features thought to be consistent with Category 1 include placental abruption, cord prolapse, uterine rupture, intrapartum haemorrhage or presumed fetal compromise.7

However, this is a heterogeneous group of conditions and there remains a spectrum of clinical urgency that makes it difficult to define each into discrete categories. On retrospective analysis of the last National Sentinel Caesarean Section Audit in the UK, only 51 per cent of Category 1 CS fulfilled the above criteria of imminent threat to life. Most of the remaining Category 1 CS were for suspected fetal compromise, where on retrospective review, the abnormal CTG was judged to not be of significant severity to be an imminent threat to the life of the fetus and should instead have been reclassified as Category 2.8

The significant limitation in establishing the urgency of delivery remains the broad spectrum of fetal heart rate abnormalities that would suggest fetal compromise and need for delivery. This highlights the difficulty in ensuring compliance with the suggested DDI times for each category when categorising the urgency in a given situation is so variable. Essentially, this requires individualised assessment of the clinical situation and the urgency associated with it.

Factors that improve DDI time for Category 1 CS encompass practical aspects, such as dedicated obstetric operating theatres in close proximity to labour ward and 24-hour access to obstetric, anaesthetic and theatre staff. Once a ‘crash’ CS is called, it requires effective communication and teamwork between the obstetric, midwifery, anaesthetic and theatre staff to prevent unnecessary delay. Simulation training and dedicated protocols for category 1 CS have been shown to improve DDI times.9 Communication errors between team members, particularly regarding the level of urgency, were major contributors to unnecessary delay.10 One way to overcome this is to include a dedicated overhead code call such as ‘code green’ that immediately alerts all staff in the hospital to the urgency of the delivery and allows for increased coordination between the multidisciplinary team. 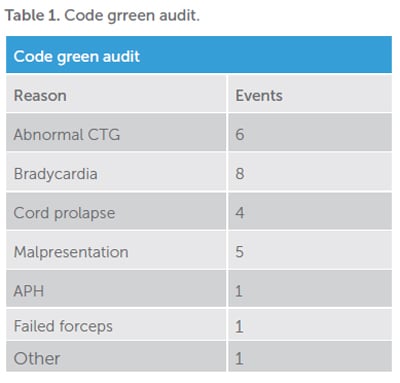 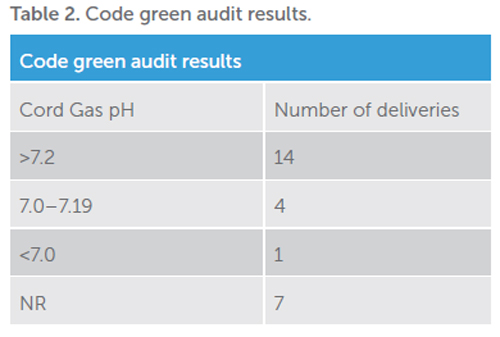 At the Mercy Hospital for Women, we have a specific ‘code green’ protocol that involves an overhead announcement simultaneously alerting all parties concerned to the urgency of the delivery. This triggers the opening of a dedicated theatre, which is then set up for immediate delivery. Transport staff are sent to collect the patient, while obstetric and midwifery staff prepare the patient and accompany them to theatre where anaesthetists are waiting for a possible general anaesthetic and a paediatrician is present in case of neonatal resuscitation. Ideally, the DDI time for a ‘code green’ crash CS is less than 15 minutes, but it requires extensive coordination between staff.

As a large women’s metropolitan tertiary centre, we are particularly well resourced to provide this level of care, but these resources are not necessarily available at many centres throughout Australia that often do not have access to 24-hour staffing or have to share operating theatres with other specialities. This resource limitation can provide significant impediments to achieving the desired DDI.

The Mercy Hospital for Women undertakes three-monthly reviews of our ‘code green’ CS to ensure we are meeting our current recommendations and to identify opportunities for improvement. An audit conducted from January to March 2016 showed 26 ‘code green’ CS out of 1449 total births (1.8 per cent) or 18 per 1000 births.

There was no difference in ‘code greens’ based on time of the day or the day of the week. The predominant reasons were abnormal CTG or fetal bradycardia, comprising over half the cases.

The average DDI time was 31 minutes, with a wide range of times from seven to 98 minutes. Although this comes close to the 30-minute benchmark, it falls significantly short of our ideal DDI of 15 minutes for a ‘code green’ CS at our centre. In 16 patients the DDI was less than 30 minutes, with eight being greater than 30 minutes and two not recorded.

Despite some of these prolonged DDI times, the impact on neonatal outcomes remains controversial. There were only five cases with recorded cord gas pH less than 7.2 and only one where the DDI was greater than 30 minutes. That case had a 51-minute DDI time in the setting of fetal bradycardia with an attempted instrumental delivery that failed and progressed to a subsequent CS with a cord gas pH of 7.1. The remaining four cases were in the setting of an abnormal CTG, a fetal bradycardia, a placental abruption and a preterm breech delivery where the DDI was 23, 15, 15 and seven minutes respectively.

The average cord gas pH in those with DDI times greater than 30 minutes was 7.28, despite a number being called for CTG abnormalities including fetal bradycardia. This compares with the average cord gas pH of 7.16 in those that delivered in less than 30 minutes. This suggests that the underlying cause for the ‘code green’ and the individual patient assessment is a more relevant contributor to poor neonatal outcomes than the DDI itself. Even across similar delivery indications, such as fetal bradycardia, some will have a more reversible cause, such as post-epidural bradycardia or uterine hyperstimulation, which allows for potential intrauterine resuscitation prior to delivery compared with those associated with placental abruption or cord prolapse.

This individual assessment of urgency is particularly relevant given the potential for psychological trauma from the crash CS experience to the patient and her family. Having the flexibility within the code system to stand down or slow down a Category 1 CS if there is evidence the trigger is resolving or less life threatening than initially thought can potentially reduce the trauma associated without significantly impacting on neonatal outcomes. This practice is suggested in the audit as those with longer DDI were more likely to have a spinal rather than a general anaesthetic and normal cord gases, demonstrating that the urgency had likely been clinically downgraded.

The risk of imminent harm in a patient remains an evolving continuum that requires flexibility and individual evaluation when assessing the clinical urgency of delivery. Crash CS, however, remains a vital part of obstetric emergency care and it is important that hospitals have effective systems in place to optimise urgent delivery when it is deemed clinically necessary. Regular audit and review plays an essential part in recognising hospital limitations and areas for potential improvement.