As a gynaecologist, one of the most challenging consultations is addressing contraception in our adolescent population. Recent Australian data has revealed that the majority of teenage girls have engaged in sexual intercourse by the end of their secondary schooling, with exact statistics hard to quantify given the challenges of accurate data collection.1 In 2016, the teenage fertility rate had continued to decline and was 11.9 births per 1000 teenage girls, compared to 34 births per 1000 in 2010.2

Although these rates suggest a step in the right direction, contraception in adolescents remains a very important topic to address. The younger the age one commences sexual activity, the greater the risk of sexually transmitted infections (STIs), unintended pregnancy, termination of pregnancy or early parenthood.3 Adolescent pregnancies are associated with increased levels of morbidity, such as minimal antenatal care or delay in accessing antenatal care, higher rates of urinary tract infections and hypertensive disorders, preterm birth and lower birthweight.4 5 6 In addition, the pregnancy can have an effect on personal, social and educational life, with higher rates of mental health disorders, lower socioeconomic status and lower levels of employment.7 The offspring of an adolescent is also more likely to become a teenage parent as part of the intergenerational phenomenon.8

Consequently, contraception is a very important issue as it is a key element in the prevention of adolescent pregnancies. This article aims to highlight the range of contraceptive options available, as well as important aspects to consider for this group of patients.

When prescribing contraception to adolescents, healthcare providers must take the opportunity to provide a more holistic approach to the consultation. It is vital to explore their personal psychosocial circumstances, take a thorough sexual health history, screen for pregnancy and STIs, promote safer sex practices, as well as counsel and provide suitable contraceptive options.9 One must keep in mind that, aside from permanent sterilisation, all methods for adult contraception are physically safe and appropriate for our adolescent counterparts. It is also important to inform the young adolescent of the law in relation to sexual activity and assess their competence to consent to treatment.10

Challenges that providers may face during the consultation include the adolescent’s attitude to confidentiality, the accessibility and affordability of methods, barriers in communication, as well as geographical difficulties for those in rural and regional areas.11 12 The counselling should also be developmentally targeted, as the contraceptive needs differ between early, middle and late adolescent females. Finally, it is important to consider the pregnancy rates with ‘perfect use’ versus ‘typical use’ of the various contraceptive methods, as ‘typical use’ is often more reflective of adolescent practices.13

Long-acting reversible contraceptives (LARC) are the most effective forms of contraception available, owing to high continuation rates that eliminate the daily adherence challenge, as well as being reversible, cost effective and maintaining high satisfaction rates.14 Only a minority of the female adolescent population is currently using LARC; however, there is a trend towards increasing use.15

The Mirena intrauterine system (IUS) is a very effective form of contraception, releasing levonorgestrel continuously over a five-year period.16 Contrary to perceptions regarding its use, the IUS is a safe method for adolescents and has a low failure rate of 0.8 pregnancies per 100 women in the first 12 months of use.17 18The IUS can safely be inserted in the primary healthcare setting, and importantly, in adolescents there is no increased risk of insertion complications, such as uterine perforation.19 The risk of pelvic infection following insertion is minimal, due to the protective effect of cervical mucus; however, it may be higher in particular subset groups of adolescents who are at high risk of STIs, which can have implications on fertility if not promptly diagnosed and managed.20 The uptake rate in adolescents is surprisingly low at 7.5 per cent; possible explanations for this include misperceptions about suitability and side effects of the IUS, and accessibility of a skilled clinician for insertion.21

The Implanon implantable device is another type of LARC. It is a flexible plastic rod about the size of a matchstick, inserted in the inner upper arm, continually releasing etonorgestrel for three years.22 The failure rate for typical use is impeccably low at 0.1 pregnancies per 100 women.23 Its high effectiveness, long duration and easy compliance are all important advantages.24 25 One of the major disadvantages, however, is irregular vaginal bleeding, usually within the first 3–6 months following insertion, which can deter adolescents from its use.26

The injectable contraception Depo-Provera contains medroxyprogesterone acetate and is given every 12 weeks. It is an effective form of contraception, although the typical use failure rate varies between 1–8 pregnancies per 100 women due to non-compliance with repeating the injection.27 One major side effect is irregular bleeding patterns that occur once commenced, which have been reported to be as high as 30 per cent among users. There can also be a delay in the return of fertility from the last injection and loss of bone mineral density with long-term use, which does resolve once discontinued.28 29

The combined oral contraceptive pill (COCP) is an effective method of preventing pregnancy through inhibition of ovulation and thickening of cervical mucus. It also carries multiple non-contraceptive benefits, such as regulating the menstrual cycle, reducing dysmenorrhoea and heavy menstrual bleeding, improving acne and hirsutism. However, the typical use failure rate is high, due to the compliance challenges associated with daily administration, reporting 6–8 pregnancies per 100 women in the first 12 months of use.30 Discontinuation of use is more commonly due to irregular bleeding in the first few months, though this usually corrects itself with time.31 Other common side effects include nausea, breast tenderness and headaches. There are different formulations of the COCP available, with the compositions of hormones varying slightly to help target specific areas such as weight and acne, which can be chosen to best suit the teenager. 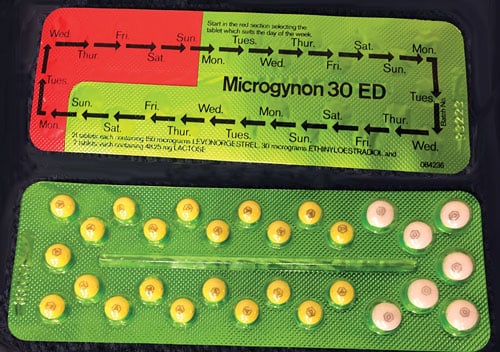 The most common and effective type of barrier contraception is the male condom. The greatest advantages are the accessibility and cost, as well as the additional benefit of protection against STIs, which is particularly beneficial in this age group.32 One of the big pitfalls of the male condom is that the failure rates are higher, especially in adolescents versus adults.33 This is due to the difficulty in correct and timely application, as well as the need for adolescents to be comfortable and familiar with their bodies. Typical failure rates can range as high as 14 pregnancies per 100 women.34

This method is administered in the immediate time period following unprotected sexual intercourse (UPSI) to prevent pregnancy. Different treatments include selective progesterone receptor modulator (ulipristal acetate 30mg), levonorgestrel-only regime (Plan B), and high-dose combined pill (Yuzpe), as well as the copper intrauterine device.35 Ulipristal acetate has proven higher efficacy then the other methods, especially if taken within the first 24 hours of USPI, and is effective for up to five days. On the other hand, levonorgestrel-only regime will prevent 85 per cent of pregnancies up to three days after UPSI, and Yuzpe 75 per cent.36 The side effects of these drugs can also be an issue due to the high dose of hormones in their composition, which can alter the bioavailability of the drug.37 The effect is only transitory; the return of fertility will be immediate and therefore a long-term treatment plan with the adolescent must be initiated. Alternatively, the copper intrauterine device can be inserted up to five days following UPSI, and has the added advantage of long-term contraception. Access to emergency contraception is just as important as the efficacy of these methods, as the success will decrease with time elapsed from UPSI. Adolescents must be made aware of the different methods available and where to source them. Pregnancy status must also be confirmed 3–4 weeks after initiation to verify success of treatment.

There are a variety of other contraceptive methods available, although these are less suitable to the adolescent cohort. The female condom is one example, where correct application is often a very difficult challenge and therefore not recommended.38 Others include spermicides, vaginal ring and progesterone pill.39 The progesterone pill is not favoured, particularly in this age group, given adherence is mandatory in order to be effective, with only a small window of opportunity if a pill is missed.40

Contraception in adolescents is an important topic and as gynaecologists we must consider the entire clinical picture when approaching each individual to ensure the most suited method is chosen. As good practice, once the contraception plan has been established, a follow-up appointment within three months should be made. This allows for monitoring to ensure correct use of contraception as well as confirming that the adolescent is satisfied with the outcome.