Compound presentation refers to the presentation of a fetal extremity alongside the presenting part. It is most often the fetal hand or arm presenting with the vertex, although can also occur in breech. Compound presentation has been reported to complicate between 1 in 250 and 1 in 1000 deliveries; however, this is a crude estimate because transient cases are not consistently documented or recognised.1 2 It is more likely to occur when the pelvis is not completely occupied by the fetal presenting part; risk factors include low birth weight, premature rupture of membranes, polyhydramnios and multiple gestation.3 External cephalic version can also predispose, wherein the limb is caught underneath the body during rotation, although this will often resolve prior to labour.

Compound presentation may be suspected when the fetal head deviates from the midline and remains persistently unengaged after membrane rupture. It is most often diagnosed after palpation of a fetal extremity during vaginal exam; however, cases have also been identified using intrapartum ultrasound.4 There is a strong association with cord prolapse, so if a fetal limb or other unusual mass is palpated during examination it is important to assess for pulsatility. In this instance, the compound presentation progressed to limb prolapse during labour.

A 33-year-old woman presented for induction of labour due to intrauterine growth restriction. She was 38+3 week’s gestation (G3P0T2), had gained 4kg since conception and her pre-pregnancy BMI was 21. Her pregnancy was complicated by a benign multi-nodular thyroid goiter that caused fluctuating hypo/hyperthyroidism since 2009. She was clinically euthyroid with normal thyroid function tests throughout pregnancy and all other antenatal blood tests were normal. She smoked 4–5 cigarettes a day up until delivery.

She was diagnosed with gestational diabetes at 30 weeks and maintained good blood sugar control with diet. An ultrasound scan at 34 weeks estimated an abdominal circumference in the 21st centile and a fetal weight of 2070g (13%). By 36 weeks, abdominal circumference had decreased to the 14th centile and estimated fetal weight was 2328g (8%), consistent with an intrauterine growth restriction. Doppler studies at 37+4 weeks were normal; however, amniotic fluid index had increased to the 95th percentile. Throughout her pregnancy, there were significant social stressors and she presented to birthsuite for recurrent decreased fetal movements at 29, 34 and 38 weeks. During each presentation, fetal movements and CTG were reassuring. Her induction of labour and the events that occurred throughout are detailed in Table 1. 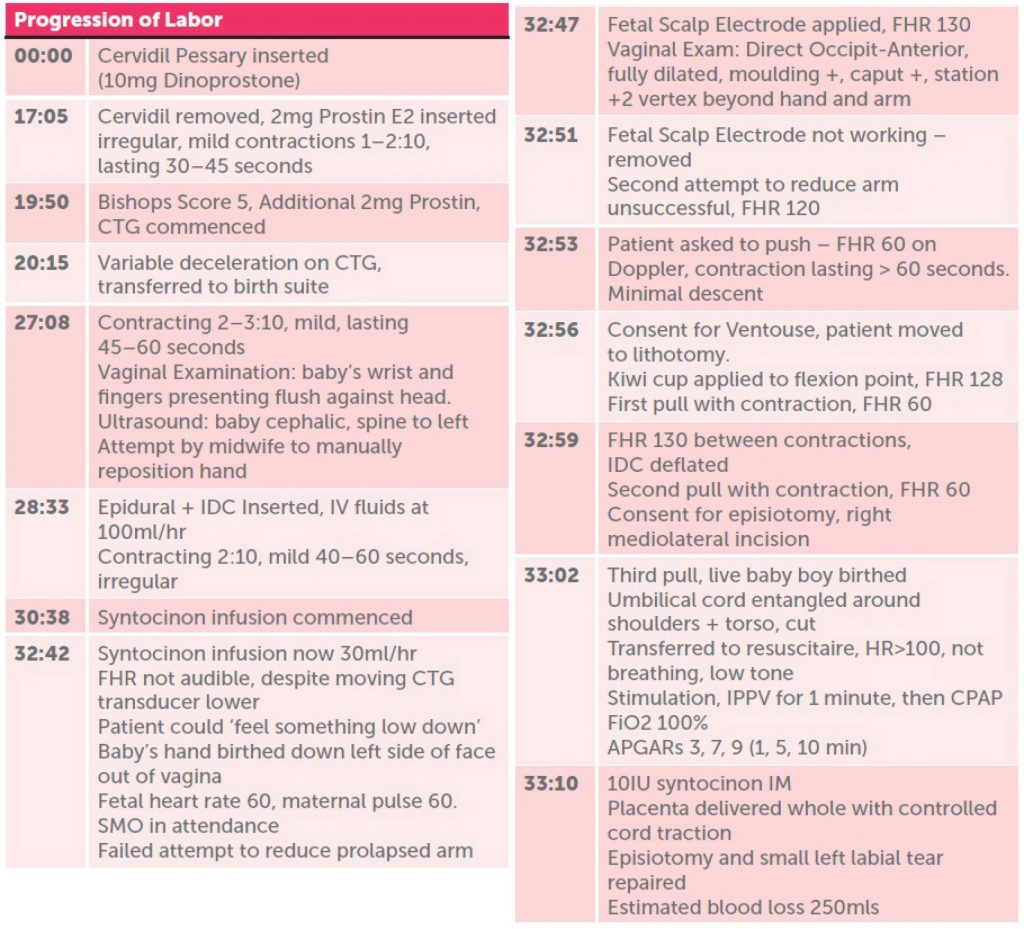 After birth, the baby was transferred to the special care nursery in a stable condition, birthweight was 2500g. His respiratory distress improved so he was weaned from CPAP to high-flow oxygen. Oxygen saturations remained above 97% and heart rate was stable at 110–130bpm. A chest X-ray revealed a left pneumothorax that was treated conservatively. By Day 4, he was ventilating on room air and a repeat X-ray on Day 5 confirmed the pneumothorax had resolved. His left arm, which had prolapsed, was significantly bruised and grey, but remained well perfused with capillary refill less than two seconds. Initial X-ray revealed a greenstick fracture of the proximal radius, so the arm was splinted. Orthopaedic review and X-ray at Day 7 confirmed that the arm and hand made a complete recovery and retained full function. There was no clinically significant injury to the head from ventouse delivery. The mother’s recovery was uncomplicated and the episiotomy wound healed completely with no residual incontinence one month after discharge. 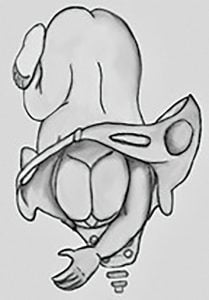 Figure 1. Occipit-Anterior presentation with hand prolapsed down the left of the vertex.

Intrapartum management of compound presentation depends on patient-specific factors, and assessment by an experienced clinician is recommended. If a fetal limb is identified in early labour, this can be managed expectantly, often as the fetal head engages the pelvis the baby will withdraw the limb and labour will progress.5 In cases of persistent presentation, the limb may be reduced back into the uterine cavity with gentle manipulation followed by a small amount of fundal pressure to reapply the presenting part. Benign noxious stimuli, such as a gentle pinch of the hand or fingertip between contractions, may also encourage withdrawal. If the fetal extremity cannot be reduced and fills the space between head and maternal sacrum it may cause a dystocia, resulting in an arrested second stage or limb prolapse.6

Compound presentation increases the diameter of the fetal presenting part. This has been associated with an increased number of pulls and higher traction forces during ventouse deliveries.7 Severe maternal rectal trauma has also been described after vacuum-assisted delivery of an unidentified compound presentation.8 Therefore, when confirming cup placement, it is important to identify a fetal limb and attempt to reduce it before applying traction. In this case, the left arm up to the elbow had prolapsed beyond the introitus. The limb was purple, swollen and the forearm was tightly wedged between the left side of the vertex and pelvis. Due to the level of descent and increasing fetal distress, a ventouse delivery was deemed to be the safest and most efficient option to expedite birth and release the entrapped arm. 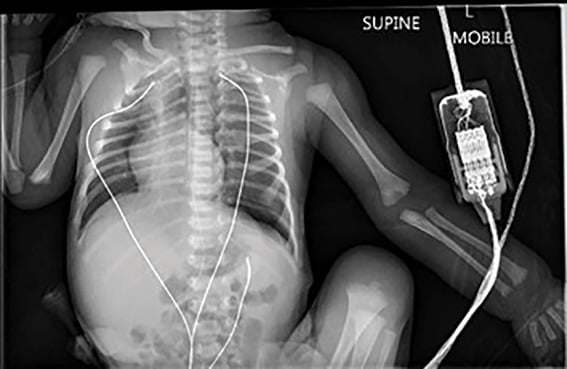 Prolonged cases of limb prolapse and dystocia have been associated with fetal hypoxia, ischemic limb injury, uterine rupture and maternal hemorrhage.9 10A case report describes a compound presentation where the arm became ischemic and required amputation after it was entrapped between the bony pelvis and fetal head.11 If the limb cannot be reduced, delivery must be expedited, which has traditionally been achieved through emergency caesarean section. However, second stage caesarean delivery increases the risk of bladder trauma, hypoxic fetal injury, extension tears of the uterine incision and maternal haemorrhage.12 Prolapse of the arm may reduce the traction force required for successful cephalic ventouse delivery compared to compound presentation where the limb remains within the pelvis. Ventouse delivery of a compound presentation with a prolapsed limb has not been described previously. This case demonstrates an alternative method to caesarean section if the limb cannot be reduced and fetal distress demands immediate delivery to prevent hypoxic injury.