Ovarian cancer is the eighth most common cancer affecting women in Australia. Women often present with vague pelvic and abdominal signs and symptoms, such as bloating, early satiety, abdominal pain and distention, constipation, and changes in urinary habits. Acutely, patients may present with pleural effusions, ascites, small bowel obstructions or deep vein thrombosis. Upon literature review, we could find only one documented case of ovarian cancer presenting as acute abdomen.1 Here we present a case of endometroid carcinoma of the ovary presenting as an innocuous ruptured ovarian cyst in a low-risk-age-group woman.

A young 29-year-old G1P0, who presented to the emergency department reporting severe abdominal pain for the past 16 hours. The pain was gradual in onset and diffuse in nature. Her last menstrual period was 10 days ago, and her pap smears were up to date. Her past gynaecological, medical, surgical, family and social histories were non-contributory. On examination, her vital signs were stable with mild tachycardia of 100bpm. On physical examination, her abdomen was distended, diffusely tender, dull to percuss, and positive for both rebound and guarding. Speculum examination revealed a normal looking cervix and vagina. The pelvic examination revealed cervical motion tenderness and bilateral forniceal tenderness. Due to voluntary guarding, no pelvic mass was appreciated on the abdominal and vaginal exam. Lab work showed a negative beta HCG, Hb of 102g/L leucocytosis with a WBC count of 31.8 as well as an elevated lactate of 3.9mmol/L. Ultrasound scan demonstrated an 8 × 7.5 × 8 cm complex cystic structure, appearance suggestive of endometriosis with large volume of haemoperitoneum seen obliterating the Morrison’s pouch.

A presumptive diagnosis of ruptured ovarian cyst was made, and a decision was taken to proceed with diagnostic laparoscopy + left ovarian cystectomy +/- left salpingoopherectomy by the general gynaecology team. Intraoperatively, haemoperitoneum of 1 litre was found. A 5 x 6 cm multiloculated left ovarian cyst was found adherent to the left pelvic wall and sigmoid colon. It had a smooth surface with no papillary projections. Apart from the above-mentioned cyst, two other small (2×1 cm) simple cysts were also found in the same ovary. The larger cyst was found to be friable and there was difficulty in achieving haemostasis after an attempt at cystectomy. Hence a decision was made to perform a left salpingoopherectomy after mobilising the mass from the pelvic sidewall and sigmoid colon. The procedure was uneventful and haemostasis was achieved. Her left ovary was mildly enlarged but nil obvious cysts were seen. The haemoperitoneum was suctioned out. A drain was left in situ and was subsequently removed on day 2 postoperatively when there was no further drain output, after which she was discharged home.

Final pathology showed a well differentiated endometroid adenocarcinoma (FIGO grade 1) involving both the ovary and tube. Immediate referral was made to the gynae oncology team, where she was discussed at a multidisciplinary team meet. A decision was made to proceed with open total abdominal hysterectomy and unilateral salpingooperectomy with staging. In the interim, as there was a possibility of synchronous endometrial cancer, she also underwent pipelle biopsy which showed proliferative endometrium. Her final histopathology post second laparotomy showed a residual endometroid adenocarcinoma (1mm) involving the left adnexa and no evidence of malignancy on her pelvic, para aortic and abdominal biopsies. She did not receive any adjuvant chemo/radiotherapy. 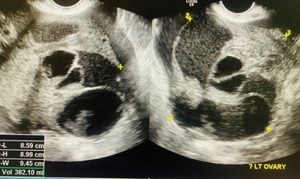 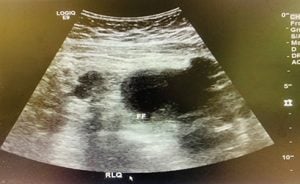 Low grade endometroid tumours are thought to evolve slowly from lower-grade precursor conditions (endometriotic cysts, cystadenomas, etc) and are classified as type I tumours.3 In contrast, high-grade endometrioid carcinomas and carcinosarcomas are thought to evolve rapidly from more obscure precursors and are designated as type II tumours. All of these high-grade carcinomas are nearly always associated with mutations in the TP53 gene.3 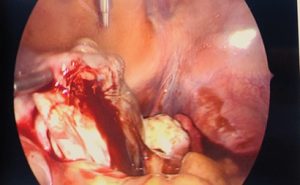 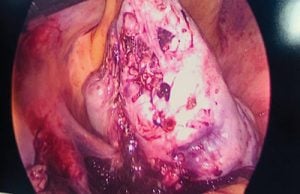 Approximately two-thirds of all epithelial ‘ovarian’ cancers are Stage III or Stage IV at diagnosis presenting with vague abdominal pain or discomfort, menstrual irregularities, dyspepsia, and other mild digestive disturbances.7 However, this case demonstrates rare presentations of cancer such as acute hemoperitoneum. It highlights the importance of suspecting cancer in otherwise seemingly benign suspected pathology for a general gynaecologist as often they are the first point of reference for such presentations.