Pulmonary embolism during pregnancy and the postpartum is a rare event, but an important and potentially preventable contributor to maternal mortality in Australia. I report on a near-miss case that highlights the growing challenges of our obstetric population and the shortfalls in evidence guiding practice to avoid the same fate for the next patient.

A 30-year-old Samoan woman presented to hospital at 37+1 weeks gestation for a planned elective lower segment caesarean section (LSCS) to deliver dichorionic, diamniotic twins. She was gravida 3 para 1 with one previous LSCS. She was morbidly obese with a BMI of 54 at the time of delivery. Her antenatal course had been relatively uncomplicated. An oral glucose tolerance test was unable to be completed owing to vomiting. She was anaemic with a haemoglobin level of 99g/L despite iron supplementation. There was no significant past medical history or family history and she was a non-smoker.

An anaesthetist reviewed the patient six days pre-operatively – she had no intercurrent illness or physical complaints. On the day of surgery, bedside ultrasound showed both twins to be in a transverse lie and the patient was deemed fit for surgery. A spinal anaesthetic was administered without difficulty. LSCS was performed and both twins were delivered in good condition. As the second twin was delivered, the patient was noted to be bradycardic, presumed to be a vasovagal episode. Atropine was administered without effect and the patient became unconscious. The blood pressure was unable to be recorded, asystole was recorded on telemetry and no pulse was palpable at the abdominal aorta. CPR was commenced, adrenaline administered and the patient intubated. After two minutes, return of spontaneous circulation occurred, but eight minutes later a further minute of CPR was required before spontaneous circulation was permanently established. At this point, closure of the uterus and completion of the surgery occurred.

Cardiac arrest was thus secondary to multiple bilateral pulmonary emboli. It is suspected that an asymptomatic pelvic vein thrombus became embolic following the delivery of the second twin. The patient was transferred to a tertiary facility for IVC filter placement, ongoing anticoagulation and intensive care support. She was extubated on day two and experienced a protracted recovery, complicated by poor healing of the caesarean section wound. On discharge from hospital after 66 days, the patient had residual moderate right arm weakness and some memory and attention deficits, but had otherwise returned to premorbid functioning. 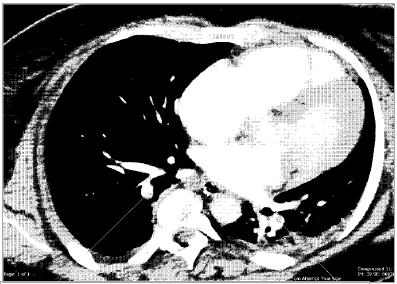 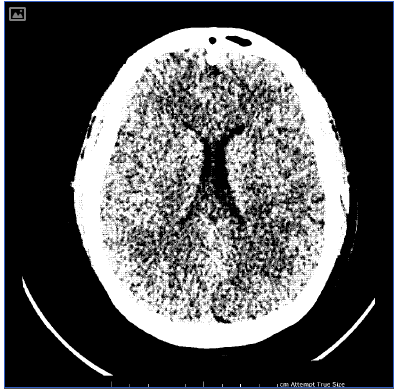 Maternal cardiac arrest is an undoubtedly alarming event every member of the obstetric team hopes never to confront. Venous thromboembolism (VTE) remains a consistent cause of direct maternal death in Australia. Lower limb venous stasis, increased procoagulant factors and vessel wall injury following venous dilatation, labour and caesarean section cause the incidence of VTE to be four- to five-fold higher than normal in pregnancy.1

It is widely acknowledged that there is an international paucity of robust population or randomised controlled trial (RCT) evidence regarding appropriate use of mechanical and pharmacological thromboprophylaxis. Current recommendations2 3 4 from international bodies each advise a relatively well-defined ‘expert opinion consensus’ on the prevention of VTE in patients with thrombophilia, a personal or family history of VTE.5 For the umbrella of ‘other’ risk factors, however, the most effective and efficient approaches are far less clear (see Tables 1 and 2). Thromboprophylaxis must be considered carefully in light of the large number needed to treat to prevent this relatively rare event, the cost at a population level of increasing widespread prophylaxis and the possible associated adverse outcomes. 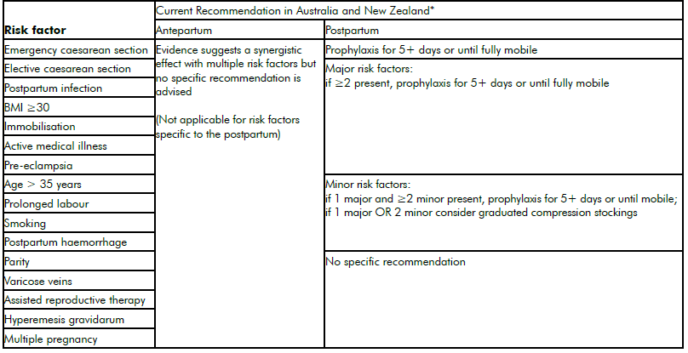 Table 2. ‘Other’ risk factors for VTE.
*Recommendations consensus and not evidence based

When considering the patient with multiple ‘other’ risk factors, international guidelines suggest an individualised discussion with the woman regarding the risks and benefits of thromboprophylaxis. The RCOG recommend consideration of thromboprophylaxis antenatally in the patient with three or more risk factors (two or more if admitted to hospital) and a lower threshold postpartum.6 A 2014 Cochrane Review of prophylaxis reported there is insufficient evidence on which to base recommendations and the small number of effects noted were from trials with poor methodological quality.7 No studies have focused on mechanical methods of prophylaxis antepartum. Some authors caution against treading too aggressively in territory where evidence is lacking8 – certainly the risk of preterm labour with twins and a potentially complicated LSCS with significant risk of postpartum haemorrhage in an obese patient would be deterrents. Yet one could say pulmonary embolism in this patient was not entirely surprising. VTE remains the second most common cause of direct maternal death in Australia.9 10  Interestingly, a NSW cohort study indicated the rate of postpartum pulmonary embolism remained stable over the period 2001–06, despite a sharp increase in caesarean section rate.11 In the UK, VTE has dropped from the first to the third most common cause of direct maternal death, which has been tentatively attributed in part to increased widespread use of thromboprophylaxis following RCOG recommendations in 2004.12 Mortality rates may have declined, but a UK population-based cohort study of more than 400 000 pregnancies showed a significant increase in antepartum VTE, with no significant change in postpartum events following the 2004 guidelines.13 Lack of data regarding the use of thromboprophylaxis in national audits makes evaluation difficult.

The need for RCT evidence to validate the use of VTE prophylaxis may soon become critical. A glance at the risk factors for VTE raises concern. Obesity continues to plague the Australian population and women of childbearing age are not exempt. In 2011, 20.5 per cent of women who gave birth in Australia had a BMI over 30.14 Preliminary results from the Australasian Maternity Outcomes Surveillance System 2006–10 review report extreme obesity in 2.14/1000 Australian and 4.56/1000 New Zealand women giving birth.15 Increasing maternal age is also problematic.16 Concurrently, the prevalence of active medical illnesses in childbearing women is climbing. The percentage of patients with cardiac disease or hypertension in VTE-related admissions in the antepartum or postpartum period increased by more than 50 per cent over 14 years in a review of a US inpatient database.17 Cardiac disease remains the number-one cause of indirect maternal death in Australia; it is estimated that five per cent of women under 45 years of age have cardiovascular disease.18

The rising use of assisted reproduction technologies (ART) may make the insidious first trimester thromboembolic event more common. The number of cycles of ART performed in Australia and New Zealand increased by 7.8 per cent from 2010 to 2011.19 For decades there was an associated increase in the rate of multiple pregnancy, but this has now stabilised.20 Finally, it is well documented that the rate of caesarean section, a key risk factor for VTE, in Australia is continuing to climb, from 27 per cent in 2002 to 32 per cent in 2010.21

As discussed in the Autumn 2013 issue of O&G Magazine, consensus-based recommendations provide some grounding for the management of the patient with an inherited thrombophilia, personal or family history of VTE, in lieu of more concrete answers. In the murky sea of potentially cumulative ‘other’ risk factors for thromboembolism in pregnancy, however, the following serve as a few timely reminders:

VTE remains an important cause of maternal mortality in Australia. The increasing use of thromboprophylaxis in recent years may have played a role in potentially stabilising the rate of VTE events, particularly in the postpartum. Nevertheless, with the threat of risk factors that continue to grow in prevalence, the need for vigilance in clinical suspicion of VTE and further research into prevention define the challenges of this generation.