It is 1893, and the fact of a caesarean section operation performed in New York is considered remarkable enough to be reported in the New York Times. Even more remarkable, and the chief point made in the article, is that both mother and baby survived.

Fast forward 123 years and much has changed. Caesarean section is commonplace, unremarkable and, on the whole, safe for mother and baby. Progression and development of anaesthetic and surgical techniques, antibiotic usage and a better understanding of the physiology of labour and the intrauterine environment have resulted in this being a safe operation. A shorter time limit on length of labour, a reduction in high assisted vaginal birth procedures, the widespread use of electronic fetal monitoring and other factors have resulted in the operation increasing in frequency to the point where roughly one-third of all births in Australia are by the abdominal route.

There is no doubt that caesarean sections save lives, but this is hard to quantify in the developed-world setting where perinatal death is rare and maternal death is almost unheard of. Headlines today are more likely to report concern about ever-increasing caesarean section rates, or ‘botched’ and ‘bungled’ deliveries where a caesarean section was either not performed or performed too late. Therein lies the tension for the modern obstetrician – damned if you do too many, and damned if you don’t do enough. Litigation and defensive obstetric practices contribute to this predicament, as does patient choice. The operation of caesarean section has become so safe that many women consider it reasonable to request it is performed on the basis of maternal choice. There are few other operations, apart those within the realm of plastic surgery, where a request for surgery is commonly made for non-medical reasons. As a departmental director in a public hospital, I am responsible for managing limited resources in a growing service. As such, if a woman cannot articulate a medical reason for requesting an elective caesarean section, it has been my position to decline any requests for non-medical caesarean section. 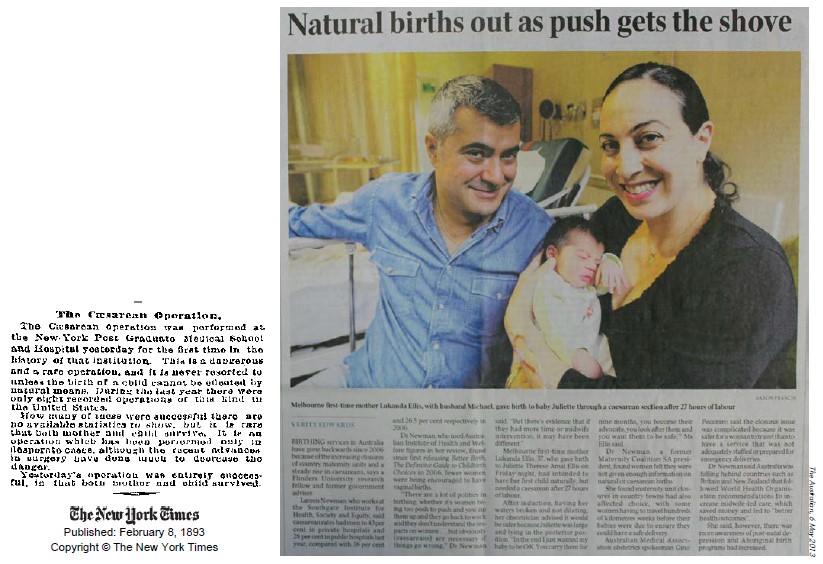 Ever since 1893, with reports of the first successful operation, caesarean section has rarely been out of the news.

This year, I reflect on the fact that I have now been an obstetrician for 20 years. This has been completely in the sphere of public obstetrics, so I make no comment or observations on private obstetric practices. Over this time caesarean section rates have continued to rise, litigation payouts are measured in the tens of millions, and even the operation itself is becoming more difficult under certain circumstances. I will discuss some of these experiences, not to draw any conclusions, but to try and link what I have observed and experienced to the issues I think are important today.

Firstly, death is still with us. I have had the misfortune to have a patient die on the table from a major placenta praevia percreta at 24 weeks; a young woman who exsanguinated in a regional centre before transfer could occur. This remains the worst clinical experience of my life, I did everything I could, but blamed myself for her death for months afterwards, and I still have terrible memories of her family screaming at me that I had killed their mother and sister. In much of Australia, where women may only have one or two caesarean sections, placenta percreta is extremely rare, but this is not the case is some demographics or for women who want large families. Caesarean section can save lives, but it can also take them.

Death is also just across the international border. When I worked in Cairns, we had a number of women who came to us from Papua New Guinea with neglected, obstructed labour of several days duration with a dead fetus and on death’s door themselves. The absence of fairly simple facilities and training in this developing country on our doorstep mean that women and their babies die on a daily basis, and caesarean sections could save lives. I wonder, for the handful of desperate women who have the resources to be carried by their relatives, travel down rivers in a canoe, then journey across the Torres Strait by outboard motor to Australia, how many other women have died? In Australia we’ve successfully quarantined thoughts of death related to birth, but in many countries new life and death are inextricably linked.

Moving away from death to the mundane, my experience as a public hospital specialist has made me consider other aspects of caesarean section. Hospital administrators and health departments are critical about caesarean section rates and, in leadership roles, I have often been asked to ‘please explain’. At the same time, there can also be punitive responses for the failure to perform a timely caesarean section. Vaginal birth after caesarean section is encouraged and rates measured, and if your hospital is an outlier you are criticised. But VBAC carries its own risks, and it comes down to patient choice. At times I have felt almost forced into encouraging women into having a VBAC, when I truly believe that counselling about these choices should be evidence based, non-directional and the decision ultimately up to the patient.

Obesity is a major issue, and performing an emergency caesarean section on a morbidly obese woman is unpleasant and high risk. It is not an easy decision. In the desire to keep caesarean section rates down, do we push women too long and too hard in labour? Do we lose situational awareness and fail to recognise or justify away deteriorating fetal condition because we are afraid of being criticised for performing an ‘unnecessary’ caesarean section. I think this has happened to all of us. Difficult second-stage caesarean sections risk injury to the mother and baby, and also the surgeon. There have been fetal deaths from inability to deliver the fetal head, and fractured skulls from excessive efforts to do so. I have a number of colleagues who have acutely injured their wrists, arms and shoulders performing difficult caesarean sections. One was off work for six months after a fractured wrist, which required surgery. The miracle of safe caesarean section is in danger of becoming an unenjoyable burden.

My final comment is that as well as a full explanation before a procedure such as caesarean section, debriefing afterwards is important too. A woman may feel upset, concerned, angry, cheated out of a vaginal birth, or be worried about an issue or aspect that has not occurred to us as the caregiver. Listening to and debriefing a woman and her family after an emergency birth, even for something you may regard as routine, is vital. After a bad outcome, this should be extended to the staff as well. If this had been offered to me after my appalling experience above, it may have helped me deal better with what happened and its aftermath. Instead, I managed with the unofficial support of my close colleagues and family, but the experience taught me a lot about not only my own reactions and resilience, but also how to help others after a distressing event.

Caesarean section is common, routine and safe – most of the time. Complexities and consequences still abound; it is still major surgery and should be respected as such. 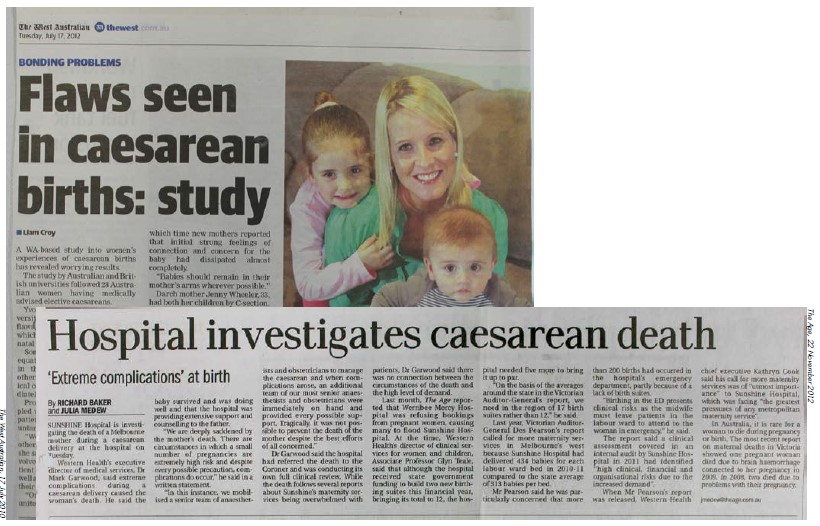 Today, rather than success being newsworthy, negative stories get the column inches.