Ovarian vein thrombosis (OVT) incidence ranges from 1/2000 to 1/3000 births and is even rarer in non-pregnant women.1 It is classically characterised by a triad of pelvic pain, fever and a right-sided abdominal mass. Idiopathic OVT excludes puerperium, pelvic inflammatory disease (PID), malignancy, recent pelvic surgery and hypercoagulable conditions.2 Hypercoagulability, venous stasis and endothelial injury are all part of Virchow’s triad and can result in the formation of thrombi.

Clinical features of OVT include fever, tachycardia, abdominal pain and leucocytosis. They can be asymptomatic in puerperium or presenting with severe complications, such as extension of thrombus into the renal veins or inferior vena cava, sepsis and pulmonary embolism (PE).

A clinical diagnosis of pyelonephritis was made. Within a day, she had been admitted to the critical care unit and started on a noradrenaline infusion for blood pressure maintenance. Broad-spectrum intravenous antibiotics for treating pyelonephritis were also commenced.

Her abdominal pain worsened, requiring strong opioids for pain control. She also complained of foul-smelling, copious vaginal discharge. These symptoms prompted her being reviewed by the gynaecology consultant. A speculum exam was performed and a pus-covered intrauterine device (IUD) of 8 years was removed. A computed tomography (CT) scan of her abdomen and pelvis ruled out appendicitis. Her antibiotics were changed to meropenem to cover suspected severe pelvic sepsis secondary to PID.

She remained septic, with a high analgesia requirement. A repeat CT of her abdomen and pelvis ruled out pelvic abscess; however, it showed bilateral OVT with the left ovarian vein thrombus just extending into the renal vein (Figures 1–3).

She was diagnosed with OVT related to severe PID, despite negative microbiology cultures. The fever is attributable to OVT complicated by sepsis secondary to PID due to an infected intrauterine device. She was initially commenced on a low-molecular-weight heparin (LMWH) for seven days, which was transitioned to oral dabigatran therapy for six months. Antibiotics were also switched to oral administration. Her abdominal pain improved immediately after commencing anticoagulation. Her discharge instructions were GP follow-up in one week, gynaecology clinic follow-up in six weeks and a repeat CT in three months to review the need to continue anticoagulation therapy. 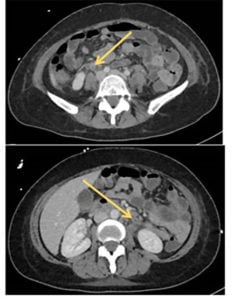 In non-pregnant women, 45% of OVT cases are right-sided; compared to being left-sided in 41% of cases and bilateral in 14% of cases. The raised incidence on the right side is due to the right ovarian vein being longer compared to the left, as well as lacking competent valves on that side.3

The diagnosis of OVT is nowadays determined by CT with a sensitivity of 78–100% and a specificity of 63–99%.4 Due to its lowered cost and faster access, it is the ‘gold-standard’ of OVT imaging. CT may show an enlarged ovarian vein that is hypodense centrally. Alternatively, magnetic resonance imaging (MRI) has a sensitivity of 92% and specificity of 100%.5 Complications such as inferior vena cava or renal vein extension can be detected on MRI or CT. Diagnosis of PE is via ventilation-perfusion scan or CT pulmonary angiogram. 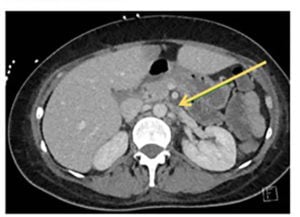 Most cases resolve spontaneously; however, due to the high risk of complications, treatment is recommended. Most experts recommend that treating rare thrombi can be equivalent to treating VTE of the lower extremities. The rational choice is utilising VTE guidelines given that the outcomes are similar.6 Due to more frequent use of CT scans for diagnosing the surgical abdomen in recent years, most cases of OVT are now treated early. Some studies documented resolution after 7–14 days, whereas others show that anticoagulant therapy of 3–6 months is recommended until imaging confirms thrombus resolution.7

The approach to management of OVT is either medical or surgical therapy, with both reporting similar success rates. The literature states that in non-complicated OVT cases, broad-spectrum antibiotics are used with anticoagulation. A reasonable treatment regime for anticoagulation may include a LMWH, warfarin or a novel oral anticoagulant (NOAC) for three to six months.8 NOACs to consider include rivaroxaban, apixaban or dabigatran. In the most recent guidelines from the American College of Chest Physicians, dabigatran was recommended over warfarin and LMWH for long-term anticoagulant treatment of VTE with no malignancy.9

Antibiotic treatment of OVT is indicated if complications like sepsis are suspected. The recommendations are broad-spectrum antibiotics for 7–10 days, based on response to treatment. While initial management of OVT with surgery is controversial, the indications for surgical treatment are complications associated with recurrent VTE despite medical treatment, free floating thrombus and contraindication to anticoagulants.10 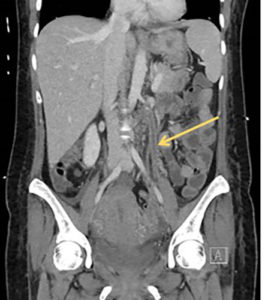 Up until now, only 10 cases of idiopathic OVT were reported in clinical literature.16The cause of this patient’s OVT is not absolutely certain, but is likely related to the pelvic sepsis she had associated with the IUD. Clinical suspicion of this condition is crucial to institute timely treatment and prevention of further extension causing renal vein thrombosis or, rarely, PE.