The vulva is part of the skin and is affected by conditions common to all skin, both inflammatory and neoplastic.

The vulva is of course subject to the unique influences of anatomy, reproductive hormones and microbial flora, in a physical environment which causes friction, heat and sweating, and is subject to a variety of irritants. As a result, the appearance of a vulval dermatosis may not be typical of that dermatosis elsewhere on the body.

Because the vulva is skin, it is useful to enquire about history of dermatological conditions and to examine the rest of the skin, including scalp, mouth and nails. This article will discuss benign inflammatory dermatological conditions of the vulva: dermatitis, chronic vulvovaginal candidiasis, psoriasis, lichen sclerosus, lichen planus and desquamative inflammatory vaginitis.

Dermatitis (synonymous with eczema) is either endogenous or exogenous. Endogenous dermatitis is usually atopic dermatitis. These women have a personal and/or family history of eczema, asthma or hayfever. This means a genetic predisposition to dry, sensitive, itchy and easily irritated skin. Exogenous, or contact dermatitis, is either due to irritants or allergens. Irritant dermatitis is caused by chemical or physical injury to the skin barrier. The vulva is an area particularly prone to irritation from multiple sources and irritation is most commonly low-grade and cumulative. Allergic contact dermatitis is an immune-mediated delayed type hypersensitivity. It is less common and diagnosed by patch testing when dermatitis is recalcitrant. Common contact allergens include local anaesthetics, antibiotics, fragrances and preservatives.

Most vulval dermatitis is atopic dermatitis with superimposed irritant contact dermatitis. Dermatitis usually presents with pruritus on the vulval skin. Mucosal involvement manifests as burning and dyspareunia. Clinical features may be very subtle, but include erythema with poorly defined margins; hyperpigmentation and lichenification (thickening of the skin with increased skin markings – the skin’s response to scratching and rubbing); hyperkeratosis; fissures; and excoriation. Chronic eczema is also known as lichen simplex (chronicus). Eczema is usually diffuse and bilateral, so if localised hyperkeratotic plaque is present, a biopsy should be performed to exclude lichen sclerosus and vulval intraepithelial neoplasia. If the plaque is erythematous or eroded, consider extramammary Paget’s disease. Patch tests should be considered if there is a dermatitis which does not respond to conventional treatment.

General management includes environmental modificationto minimise or modify exposure to irritants. A potent topical corticosteroid such as methylprednisolone aceponate 0.1 per cent fatty ointment is used until symptoms resolve, then as required for flares, which is to be expected as dermatitis is a recurrent condition. If recurrences are frequent, maintenance treatment with a weak corticosteroid ointment such as hydrocortisone one per cent daily may be required. An ultrapotent corticosteroid preparation such as betamethasone diproprionate ointment 0.05 per cent (optimised vehicle) may be required for lichenified dermatitis. Reduce the potency as the lichenification improves. Allergic contact dermatitis improves when the causative allergen is avoided.

Vulval psoriasis is a manifestation of flexural psoriasis and localises in this area because of friction, sweating, heat and scratching. Psoriasis is usually intensely itchy in the vulva. There may be a family history of this disorder. Examination of the nails (pitting, onycholysis), scalp (scaly plaques) and skin (especially over extensor surfaces of elbows and knees) may provide clues. Often, the characteristic features of psoriasis in the vulva are not apparent – scale may be lacking and margins less well-defined. An important diagnostic clue is erythema involving the inguinal folds and extending into the gluteal crease. Fissures are common. Psoriasis never involves mucosa. Diagnosis is usually clinical and biopsy, if performed, may be non-specific. Psoriasis is less responsive to therapy than eczema and often requires maintenance treatment to prevent recurrence. Initial treatment to induce remission consists of a potent topical corticosteroid ointment such as methylprednisolone 0.1 per cent fatty ointment for several weeks. Once improvement occurs, a weak tar preparation such as LPC (liquor picis carbonis) two per cent in aqueous cream is usually effective. Calcipotriol 0.5 per cent ointment may be tolerated once initial improvement is achieved with corticosteroid.

This is a disorder affecting a small percentage of women and is distinct from acute candidiasis. Pathogenesis is unknown but probably represents a hypersensitive reaction to the presence of candida organisms, rather than an infection. No defects in cell mediated or antibody immunity, either localised or generalised, have been discovered. Estrogen is a factor, as candidiasis does not occur in premenarchal girls or post-menopausal women unless other risk factors are present, which include hormone replacement therapy, diabetes and antibiotics. Many women are atopic. Symptoms are usually long-standing, predominantly pruritus and burning, with resultant dysuria and dyspareunia. Vaginal discharge is not characteristic. There is often a history of acute thrush, with exacerbation of symptoms premenstrually and after courses of antibiotics. There may have been positive swabs in the past, but not invariably. Appearance ranges from almost normal to significant vaginal erythema and oedema. There is a dermatitis on the surrounding vulval skin, often around the introitus, and on the medial buttocks. Always perform a low vaginal swab on the first presentation of a woman with vulval pruritus. Chronic candidiasis may coexist with other vulval dermatoses. A positive swab is not a diagnostic test – candida species are commensals and may not cause symptoms, while a negative swab does not eliminate the diagnosis, often because many women self-medicate with antifungal creams and tablets. The presence of non-albicans candida may not indicate a pathogen.

A trial of treatment may be the best diagnostic test. Treatment of chronic candidiasis involves an oral antifungal agent, most commonly fluconazole and itraconazole, for long enough to suppress the symptoms and then weaned slowly to avoid recurrence. This usually involves treatment over many weeks to months. Topical antifungal creams are invariably irritating with long-term use. Consideration should be given to contraception, drug interactions and monitoring liver function tests if therapy is prolonged. Fluconazole is given as an induction course: 150mg every three days for two weeks, then 150mg weekly. Itraconazole is prescribed as 100mg daily. Treatment is continued until symptoms are suppressed, then gradually withdrawn until the lowest dose which controls symptoms is reached and continued for six months. Many women relapse after cessation of this regime, requiring ongoing maintenance treatment. Hydrocortisone ointment one per cent is prescribed for the dermatitis on vulval skin for as long as needed. If non-albicans candida are thought to be the cause of symptoms, boric acid pessaries 600mg daily are prescribed until symptoms resolve, then once or twice weekly as maintenance treatment.

Lichen sclerosus is a chronic inflammatory dermatosis, thought to have an auto-immune pathogenesis, as it may be associated with thyroiditis and vitiligo. It can occur on non-genital skin. It can occur at any age but especially in peri-menopausal and post-menopausal women. It also occurs in premenarchal girls. It usually presents with pruritus but may be asymptomatic. It may also cause dysuria, dyspareunia, constipation and sleep disturbance. It has a characteristic clinical appearance: early with atrophic, pale papules and plaques, later with sclerotic plaques involving the vulva, perineum and perianal skin in a ‘figure of eight’ distribution. It does not involve the mucosa. It may result in loss of architecture with obliteration of the clitoral hood, resorption and adhesion of the labia minora and introital stenosis. Vitiligo may coexist and be difficult to differentiate. Vitiligo is characterised by complete depigmentation rather than pallor and there is no alteration in skin texture.

Biopsy is often indicated to confirm the diagnosis of lichen sclerosus, as this is a long-term condition which requires suppressive therapy, with a risk of scarring and malignancy. Biopsy is mandatory if there is a unilateral pale hyperkeratotic plaque to exclude vulvar intraepithelial neoplasia (VIN). Risk of development of squamous cell carcinoma is in the order of five to six per cent, but may be reduced by suppressive therapy.

Management consists of induction with ultrapotent topical corticosteroids to relieve symptoms. The potency of the corticosteroid is then reduced. The aim of treatment is to relieve symptoms, normalise appearance, prevent scarring, and, it is hoped, reduce the risk of squamous cell carcinoma. One suggested regime is betamethasone diproprionate 0.05 per cent ointment (optimised vehicle) twice daily for four weeks, then daily for four weeks. If clinical appearance has normalised, slow reduction of topical corticosteroid potency initially to methylprednisolone aceponate 0.1 per cent fatty ointment, then long-term maintenance treatment with hydrocortisone ointment one per cent, is achievable in many women. ultrapotent corticosteroids can be reintroduced for flares in disease. Maintenance treatment with weak topical corticosteroids may be more appropriate than episodic ultrapotent preparations alone, as disease can recur asymptomatically and progress silently.

Surgery is indicated for division of adhesions. After this, treatment with ultrapotent topical corticosteroids needs to be recommenced immediately post-operatively to prevent adhesions reforming.

Women need to be reviewed at six-monthly intervals to check for disease recurrence, scarring and signs of malignancy – persistent hyperkeratosis, erythematous patches. A biopsy should be performed if there is any suspicion of malignancy.

Lichen planus is a chronic inflammatory mucocutaneous condition. It is thought to have an immune basis as the histological hallmark is a lymphocytic infiltrate in the upper dermis directed against the basement membrane zone. It is usually idiopathic, although sometimes may be induced by contact allergens or infections such as hepatitis B and C. On keratinized skin of the vulva, it presents as pruritic violaceous erythematous papules and plaques, often with characteristic lacy scale. When it involves vaginal mucosa it causes pain and discharge. Oral mucosal involvement often coexists. This manifests as erythema and erosions on the vaginal mucosa. While speculum examination is ideal to assess the extent of involvement, it is often too painful to perform. Scarring can occur. Histopathology of mucosal lichen planus may not be diagnostic. Lichen planus may be difficult to control and requires oral or ultrapotent topical corticosteroids for suppression, with introduction of steroid-sparing agents once control has been achieved. Topical treatment may be possible with calcineurin inhibitors such as tacrolimus ointment 0.1 per cent (from a compounding pharmacy). Pimecrolimus cream (Elidel cream) often causes intolerable stinging. Systemic therapy may be required and agents used include hydroxychloroquine, actiretin and methotrexate.

Surgical treatment may be required for correction of scarring. If this is performed, it is vital to prevent reformation of scarring and adhesions with oral or ultrapotent corticosteroid ointments in the healing phase.

This condition may be confused with vaginal lichen planus, as it presents with pain and discharge with erythematous patches on the vaginal mucosa. However, there is no erosion (and therefore no potential for scarring) and erythema may appear glazed and petechial. It does not involve vulval skin. Histopathology is non-specific, showing mixed inflammatory infiltrate. Most women are perimenopausal. It may be the same condition as Zoon’s vulvitis and plasma cell vulvitis. The pathogenesis is unknown but thought to be inflammation due to alteration in vaginal microbial flora. Low vaginal swabs are non-diagnostic and may report polymorphs and gram positive cocci.

This condition responds to anti-inflammatory antibiotics, used intravaginally, such as clindamycin two per cent, mupirocin two per cent, or metronidazole 0.75 per cent creams, used daily for several weeks until symptoms improve and erythema resolves. This condition may be recurrent and maintenance treatment once or twice weekly is often required. Hydrocortisone one per cent ointment may be helpful for symptom relief.

Benign vulval dermatoses are chronic, recurrent disorders, which, like dermatological conditions in general, are not cured but controlled. Patient education to understand this concept and the need for ongoing maintenance treatment is important. A useful website for patients is www.caredownthere.com.au, written by a collaboration of practitioners from the fields of dermatology, gynaecology, sexual health, physiotherapy and psychotherapy. 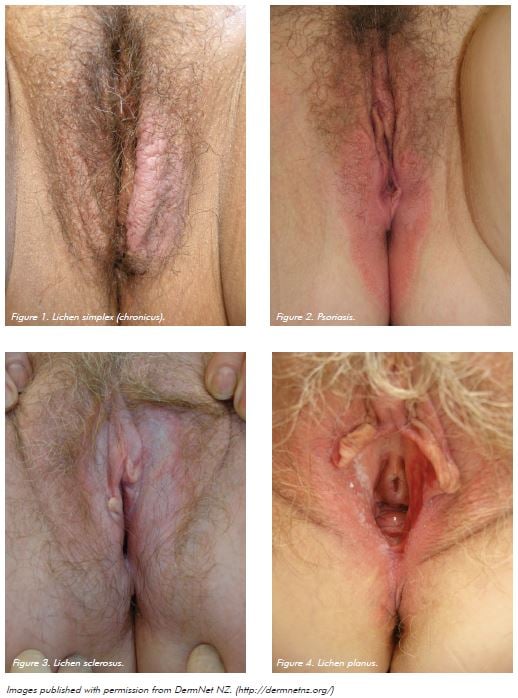