As an obstetrics and gynaecology senior registrar in 1994 and 1995, at the Mater Hospital, Brisbane, I had the great pleasure and privilege of being trained by Dr Aldo Vacca. He was responsible for managing a very cohesive unit, where we all worked well together developing friendships that persist to this day. These were rekindled during the recent RCOG/RANZCOG meeting in Brisbane, where and when it was determined that we should honour Aldo’s legacy in a more appropriate way than the recent article (O&G Magazine Vol 17 No 1 Autumn 2015 p55).

He was not motivated by money evidenced by the old, modest car he drove. His interest was in the safe care of mothers and safe delivery of babies. His passion, enthusiasm and immense skill in performing vacuum extraction were infective. It was impossible to contemplate performing an instrumental delivery by any other method. His reputation went before him. One of his former trainees, then working in London, described Aldo conveying that vacuum delivery was an art, not simply placing the cup somewhere near the fetal occiput and pulling. She was convinced that Aldo’s epithet would be ‘it [the flexion point] is always more posterior than you think’.

He was a great role model in how to be a labour ward consultant. He was always available, his office was on the labour ward and his door was always open. Nothing went past his watchful eye. He maintained that post vacuum delivery we must always check whether the cup had been placed on the flexion point and if not what sort of application had occurred. He ensured that we always checked the application point. Following an unsuccessful vacuum delivery we were encouraged to determine the reason.

We remember his immense long-term vision for the future and his endeavours in designing his OmniCup (Kiwi cup). Several of us auditioned its use to ensure that the cup could be easily used, regardless of hand/glove size. Two decades later, the realisation of his wish that this instrument be successfully and widely available has come to fruition.

Those of us trained by him at the Mater Hospital in Brisbane recall his reaction to being presented with the cartoon of his caricature (see below). 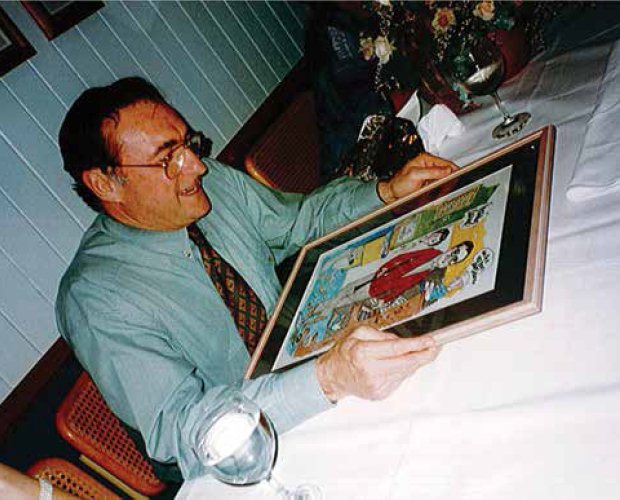 Dr Aldo Vacca reacts with pleasure and surprise, having been presented by his colleagues with a framed cartoon featuring his caricature (photo taken in 1995).

Seeing his wife Jan and his daughter continue his legacy and his teaching is brilliant. A fundraising symposium is being held in his memory at the RCOG in London, in September 2015. This has motivated us to request RANZCOG consider something similar.