Pelvic inflammatory disease (PID) is a common condition that causes acute abdominal pain in women. The disease generally involves inflammation of the fallopian tubes, endometrium, pelvic peritoneum and contiguous structures.1 While Neisseria gonorrhoeae and Chlamydia trachomatis are frequent causes of PID, there are other pathogens, such as E. coli and Mycobacterium tuberculosis, that less commonly cause PID.2 Enterobius vermicularis is a nematode that predominantly infects the human small and large intestines.3 Rarely, its extraintestinal infestation has been reported.4 This case presented is of an 11-year-old girl with acute lower abdominal pain, who was initially treated with the working diagnosis of acute appendicitis. However, intraoperatively, findings were suggestive of PID, with histopathology confirming Enterobius vermicularis. Therefore, it is important that clinicians are aware of the possibility of Enterobius vermicularis causing PID in children.

PID is an inflammation of the female reproductive tract, commonly a sequela of an infection. This infection can involve the vagina and cervix and may also progress to include the fallopian tubes and ovaries.5 6 Patients can present with a wide range of clinical manifestations, most commonly acute lower abdominal pain. If untreated, in the long term this disease can lead to infertility,7 ectopic pregnancies and chronic pelvic pain.8 Therefore, diagnosis and early treatment are important.

PID is associated with symptoms of acute lower abdominal pain of varying intensity, abnormal vaginal discharge, dyspareunia and postcoital bleeding. Even though systemic features are not common in PID, patients can report experiencing fevers, chills and nausea. Clinically, PID can be demonstrated with cervical tenderness and adnexal tenderness. Endocervical swabs can confirm the pathogen,9 while the standard for diagnosis of PID remains laparoscopy. The treatment regime for PID is usually a single dose of 500mg azithromycin and 1g ceftriaxone followed by 100mg doxycycline twice daily for two weeks10 for common pathogens of PID.

Enterobius vermicularis mainly infests the large and small intestine, where it completes its entire 11 Once the ova are transferred to the lumen of the gastrointestinal tract, the protein layer of the ova dissolves and the larvae are released to the small bowel. After mating, the male worms die and the gravid female worm migrates to the perianal region and lays its eggs, causing symptoms of itch and irritation. Reinfection occurs via faecal-oral route, by transfer of the eggs.12 However, given its low pathogenicity,13 the infected individual can be asymptomatic or have non-specific symptoms of abdominal pain, nausea and vomiting.14

Enterobius vermicularis is not a well-known cause for PID: our literature review found only three reported cases of ectopic infestation,15 16 17 mainly in the young female upper genital tract. We report one such case in detail.

An 11-year-old girl was an inter-hospital transfer from a rural town with right iliac fossa (RIF) pain. She presented with a two-day history of crampy RIF pain, which worsened with food, and denied any nausea, vomiting, urinary or bowel symptoms. She did not have any systemic symptoms, such as fever or weight loss. She had not attained puberty. Her past medical history, family history and social history was unremarkable. On examination, all her observations were within normal limits and she was afebrile. The only remarkable finding was tenderness on deep palpation in RIF; however, she was not peritonitic and there was no obvious mass felt.

Laboratory blood tests were generally within normal range; of note, there was a white cell count of 9.6×109/L and the C-reactive protein was less than 2mg/L. The urine sample collected did not culture any bacteria to suggest a urinary tract infection. An ultrasound of the abdomen and pelvis was performed, revealing a central hypo-echoic focus of 29mmx13mmx26mm in the RIF, consistent with infectious or inflammatory phlegmon, suggestive of acute appendicitis.

The decision was made to proceed with laparoscopic appendectomy. Intraoperatively, there was a clump of inflamed omentum, separate from the appendix, which appeared normal. On inspection of the reproductive organs, the fallopian tube and uterus were inflamed with fibrin adhesive deposits, of similar appearance to PID. The omental mass was resected and sent for histopathology analysis. Peritoneal fluid was sent for microbiology, culture and sensitivity.

The culture and microscopy did not reveal any common pathogens that cause PID; however, on day six of hospital admission, histopathology of the omental resection demonstrated fragments of helminth, suggestive of Enterobius vermicularis. Figure 1 shows the microscopic picture of the helminth, with associated inflammatory response. On confirmation from histopathology, the patient was treated with two doses of albendazole 400mg and discharged. Counselling was provided for family regarding treating all family members and general hygiene. 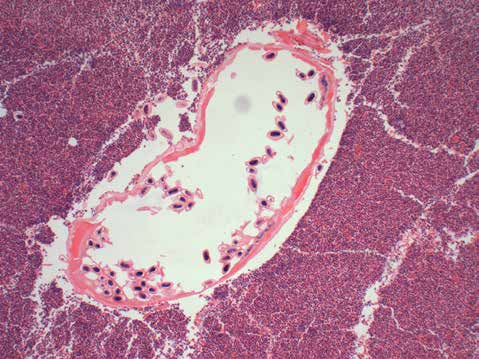 Enterobius vermicularis is one of the most common nematodes with low pathogenicity that infects the human body.18 19 It is more commonly found in temperate regions than in tropical regions. It is predominantly seen in children in the age groups of five to ten years old.20 21 It usually infests the large and small intestines and ectopic infestation with this species is rare. This case study is a rare presentation of this nematode’s ectopic manifestation causing PID.

There have been three cases reported of ectopic Enterobius vermicularis infection causing PID in adolescents.22 23 24  This can occur when the gravid female worm migrates from the perianal area to the vagina, ascending through to the cervix and involve the fallopian tubes and peritoneum. Most infestations are asymptomatic, but can provoke pathologic  reactions, giving severe symptoms of cervicitis, endometritis, salpingitis, oophoritis and generalised peritonitis.25 26 In our case, the initial working diagnosis and management for this young patient was acute appendicitis,27 which commonly mimics the symptoms of PID. Histopathological and cytological diagnosis 28 is the only way for definitive diagnosis and confirmation of PID owing to Enterobius vermicularis. Therefore, early management with anti-parasitic treatment is important. The patient and family must also be well counselled about treatment with anti-parasitic medications for the whole family and practising good hygiene, as poor hygiene is the main source of the spread of infection.29