Some things are familiar – morning handover, ward rounds, teaching sessions – but there are aspects of O&G practice here that are vastly different.

I’m sitting on a bench inside the outpatients clinic at Honiara’s National Referral Hospital (NRH), flanked by the department’s four consultants and three registrars. A handful of junior doctors have also gathered, most recently returned to Solomon Islands having completed their undergraduate studies in Cuba.

This is the only O&G unit in the country. It’s a precious resource in a county of 640 000 people, dispersed over a large swathe of the Pacific Ocean. Solomon Islands are an archipelago of approximately 900 islands – it’s an incredibly beautiful country, but incredibly remote.

The handover from the night shift is telling. We hear about several neonatal complications, a stillbirth and, unfortunately, a maternal death. The latter is uncommon, but frequent enough that this feeling – a nauseating mix of hopelessness, regret and sadness – is familiar.

As a group, we discuss the issues affecting these women and the factors that contributed to their poor outcomes. Frequently, they have had limited antenatal care due to poor healthcare access. Occasionally, NRH has been short on necessary equipment and staff.

The Head of Department, Dr Leeanne Panisi, is all too familiar with these issues. From November 2011 until 2014, she was the sole local O&G in the country. She is an inspirational Solomon Islander who is doing an outstanding job as a clinical leader.

‘Many women have a lot of difficulty getting to clinics and health centres, and sometimes people can take a long time to seek help, often because of the lack of transport, and sometimes because of the cost of the journey,’ she told the World Bank in a recent profile piece.1 ‘And we don’t have many specialist doctors in provincial areas; most are general practitioners. Specialists who deal with obstetrics and gynecology – there are only a few of us, and we are all based in Honiara.’

Despite the incredible efforts of Dr Panisi and colleagues, it’s easy to see why neonatal and maternal mortality rates are high. The challenges are complex and resources are few. But there is a sense of optimism here at NRH, and it’s an absolute pleasure to visit Dr Panisi and her team as they continue their pursuit of improved women’s health across the country.

The night team hand over the care of the women in birth suite, which consists of three sections – the first-stage area, the second-stage area and the immediate postnatal area.

With approximately 15 births per day (5600 births per year), the women in the first-stage area are not individually discussed at handover. Nor are they allocated a private area; they congregate in the room, swaying in a trance-like state, until they feel the urge to push. At this point, they are examined and taken to one of the second-stage rooms.

Today, three out of the four beds in the second-stage area are occupied. In bed one, Barbara* is pushing to deliver the second twin, learning only five minutes ago that she was expecting two babies. This is often the case for multiple pregnancies as women do not routinely undergo ultrasound scans antenatally.

In bed three, Cathy* is in obstructed labour with her first baby. A caesarean section has been arranged; however, before getting into the operating theatre, required blood needs to be cross-matched. Her relatives are currently at the blood bank donating blood in case she requires a transfusion; unfortunately, this is often a cause of delay for delivery. At NRH, as with many developing settings, the caesarean section rate is much lower than Australia and New Zealand, at approximately 10 per cent.

The mood is lighter in bed four. Janet* is cradling her newborn while a midwife delivers her placenta. It’s a beautiful moment in an otherwise chaotic environment.

I meet these women on the morning ward round following handover. As with many low-income countries, they are alone in birth suite, supported only by the midwives and doctors.

Husbands and relatives mill around outside the doors awaiting news and updates. I smile and say good morning to them as we walk into birth suite. ‘Morning iufela,’ they reply, in a calm and affectionate manner that sharply contrasts the struggles beyond the door.

Improving outcomes and consistency of care

So what am I doing here? In 2017, I volunteered as a senior O&G registrar at NRH. My role was part of the Solomon Islands Graduate Internship Supervision and Support Project (SIGISSP), and my primary responsibility was to support and mentor Cuban-trained junior doctors transitioning to practice in the Solomon Islands.

I’m back in Honiara for a project that’s become a labour of love (pardon the pun) over the last 18 months. I have been working with Dr Panisi and her team to develop a national Standard Treatment Manual (STM) for O&G. It’s an exciting initiative and has just reached completion.

When I first arrived in Honiara, I asked many questions of the local consultants, registrars and midwives. I wanted to be sure that the treatment I provided was relevant, appropriate and consistent with local practice. I also spoke with patients about their journey to NRH and their healthcare experiences.

After many conversations, it became apparent that there was significant variation in quality of care across the country. Dr Panisi and colleagues explained that many healthcare workers, especially those in the provinces, are uncertain about best practice women’s healthcare and lack access to clinical resources.

Together, we identified that a standardised O&G treatment manual could address some of these challenges. While the World Health Organization reference text ‘Managing Complications in Pregnancy and Childbirth’ is theoretically available to Solomon Islands clinicians, it is not locally specific and many of the treatment options are not available.

With much gusto, we formed a working group to develop a STM in O&G for the country. This was chaired by Dr Panisi and included the three other Solomon Islands O&G specialists, two local registrars, a senior midwife and me. The Papua New Guinean STM (a document with similar objectives, but relevant to the PNG context) was used as a template (with permission), and each chapter was reviewed and updated by a member of the working group. My role was to compile the chapters, edit the content and arrange external review by provincial health workers and two international O&G specialists.

The end product is a 200-page, A6 manual – designed to fit in the pocket of Solomon Islands healthcare workers. It has been endorsed by the Solomon Islands Ministry of Health & Medical Services, and professionally designed thanks to generous sponsorship from RANZCOG.

The World Health Organization has kindly funded printing of the manual, which means that every Solomon Islands healthcare worker dealing with women will have a personal copy. They will be disseminated using the pharmacy distribution network and delivered during O&G outreach visits. The content will even be available via an app sponsored by the Therapeutic Guidelines Foundation. 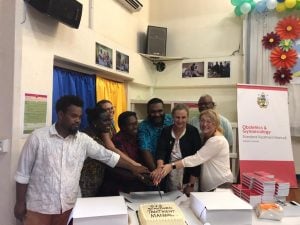 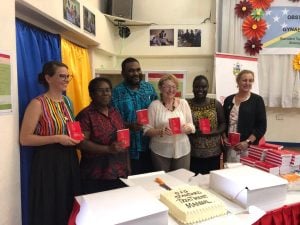 On 21 May, the Manual was officially launched at NRH. This included a celebratory lunch and, in true Solomon Islands fashion, lots of music and dancing. Funding for this event, and associated activities, came from the AVI Go Back Give Back competition.

In the week of the launch, the STM Working Group also facilitated a series of education sessions on the Manual and its content. Workshops were delivered to senior clinicians (using a train-the-trainer model) as well as end users. Emergency management flowcharts, based on content in the Manual, have been printed and placed on the walls of birth suite as a quick reference guide.

The process of developing and publishing the STM took close to 18 months of work. It required a huge amount of time and dedication on the part of local clinicians, who pursued the project with vigour from the outset.

The end product is excellent (well, at least the working group thinks so!), but the development process also extremely positive. The STM is an example of Australian and Pacific colleagues collaborating towards improved women’s health, and I am proud to have played a small part. The clinical and educational aspects of my volunteer assignment were rewarding, but it is capacity development initiatives such as the STM that will have lasting effects.

At the end of the day, the O&G team gather briefly in birth suite to discuss patient management plans for the night. There’s a new flowchart on the wall and a copy of the STM on the work desk. Neither of these things guarantee good clinical outcomes, but my optimistic ambition is that the Manual will positively impact on the care of women in this birth suite and beyond.

This morning’s handover, and the morbidity and mortality attached to it, is a sad reality for now. The hard work of the O&G team at NRH is changing that however, and it’s been inspiring to watch the consultants, registrars and midwives galvanise around the STM project.

For Dr Panisi’s part, her vision is clear. ‘I’m hopeful that we will improve maternal health in Solomon Islands. Preventing maternal deaths and helping women with gynaecology problems is our goal.’

* all patient names have been changed.